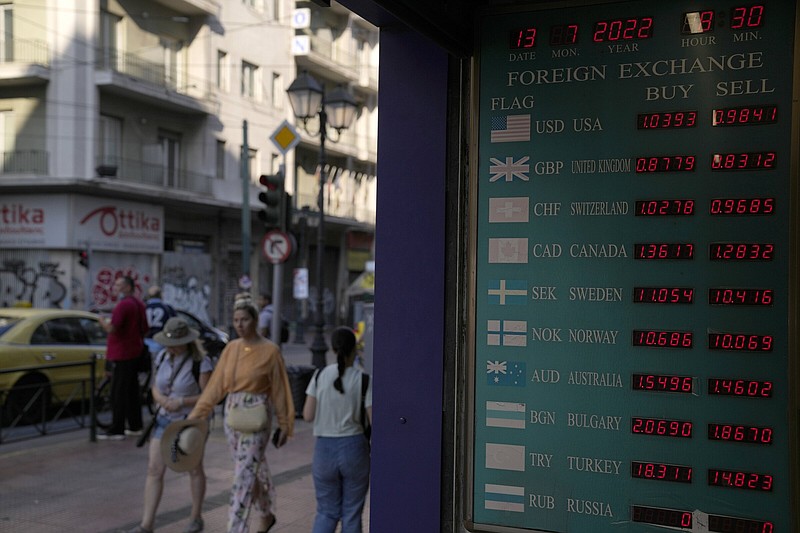 A screen of a currency exchange office shows the foreign exchange as pedestrians walk at Omonia square in Athens, Greece, Wednesday, July 13, 2022. The euro on Tuesday fell to parity with the dollar for the first time in nearly 20 years. (AP Photo/Thanassis Stavrakis)

Already suffering from the war in nearby Ukraine, eastern Europe's main currencies are about to take another blow from a looming euro-area recession.

Traders are more bearish on the Hungarian forint, Polish zloty and Czech koruna than any other developing-nation currency except for Russia's ruble and the Turkish lira, according to data collected by Bloomberg.

The three currencies are seen as especially vulnerable to wavering demand from the 19-nation single-currency area, which buys about 60% of each country's exports. Since Russia's invasion of Ukraine in February, they have also been trading increasingly in lockstep with the euro.

"We are cautious and negative on eastern European currencies," said Paul Greer, a money manager at Fidelity International in London who is betting on further declines in the zloty and koruna versus the dollar. The region "is the most vulnerable bloc within emerging markets in the currency space," he said.

While the International Monetary Fund warned in July that the world economy may soon be on the cusp of a recession, the euro region's prospects look particularly dire. Record-breaking inflation and the heightened likelihood of a Russian energy cutoff threaten to inflict a slump in the single-currency club.

Eastern European currencies will likely see the biggest declines in emerging markets if the euro drops below dollar parity for a sustained period, given their exposure to euro-bloc demand and gas disruptions, Goldman Sachs strategists said. In late July, the U.S. bank cut its three-month euro target to $0.99 from $1.05.

"Europe is far more vulnerable at this stage, so it's reasonable to assume that the central and eastern currencies will underperform, especially if euro-dollar falls," said Piotr Matys, a senior currency analyst at InTouch Capital Markets.

The region's currencies have been among the hardest hit by the fallout from Russia's invasion of Ukraine in February. Since the war started, the forint weakened 17% against the dollar and 8% to the euro. The zloty has lost 12% versus the U.S. currency in the period, while the koruna slumped 9.4%.

The currencies' growing connection to the euro underscores the potential for further impact from any weakening of the common currency. When paired against the dollar, all three have an inverse correlation with the euro of around minus 0.8, where minus 1 would indicate they would move in lockstep with the euro.

For now, rapid monetary tightening in Hungary has helped to stabilize the forint after it plunged to a record low against the euro in July. The fact that Prime Minister Viktor Orban's government hasn't yet secured access to the European Union's pandemic recovery fund is also weighing on the currency.

In Poland, authorities have made more progress in talks with the EU's executive to access recovery funds. Meanwhile, the country's central bank is close to the end of its monetary tightening cycle, which took its key rate to 6.5% compared with 10.75% in Hungary.

The Czech koruna has been the most stable, largely due to the central bank's currency interventions.

The monetary authority kept its key interest rate unchanged at 7% last week, making good on the plan by the new governor, Ales Michl, to halt aggressive monetary tightening. That will give policymakers time to assess economic developments and the impact of the current level of borrowing costs, he wrote in his weekly newspaper column.

The outlook for the region is mixed, said Oliver Harvey, who heads currency research for central and eastern Europe, the Middle East, Africa and Latin America at Deutsche Bank AG.

Concerns about Hungary's economy have been priced in while the koruna will likely begin trailing its regional peers as the Czech Republic loses its competitiveness and the pace of intervention eases, he said.

But a euro slide below parity could seal the three currencies' fate.

"If the move below parity is being driven by euro specific factors -- i.e., a further worsening in the Russia/Ukraine conflict and spillovers into the euro-zone economy -- CE3 would underperform," Harvey said.