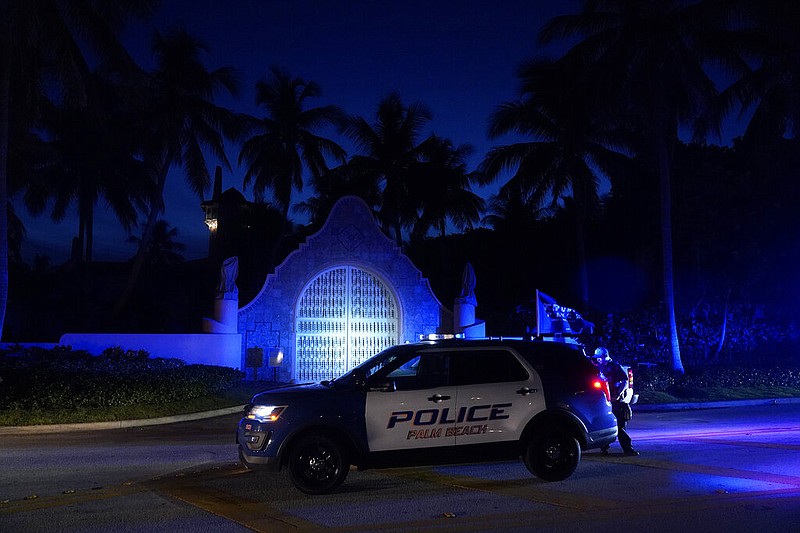 Police stand outside an entrance to former President Donald Trump's Mar-a-Lago estate, Monday, Aug. 8, 2022, in Palm Beach, Fla. Trump said in a lengthy statement that the FBI was conducting a search of his Mar-a-Lago estate and asserted that agents had broken open a safe. (AP Photo/Wilfredo Lee)

Former President Donald Trump said Monday that the FBI had raided his Mar-a-Lago Club and searched his safe -- activity related to an investigation into the potential mishandling of classified documents, according to a person familiar with the probe.

Such a move, a court-ordered search of Trump's property to look for possible evidence of a crime, is deeply unusual for a former president. It represents a historic moment in Trump's tortured relationship with the Justice Department, both in and out of the White House, and a new stage in a long-running investigation of whether documents, some of them top secret, were taken to Mar-a-Lago instead of sent to the National Archives when Trump left office.

"My beautiful home, Mar-A-Lago in Palm Beach, Florida, is currently under siege, raided, and occupied by a large group of FBI agents," Trump said in a statement released through his political action committee, Save America.

The FBI declined to comment on whether it had conducted a search of the former president's property.

A person familiar with the investigation, who spoke on the condition of anonymity to discuss its details, said agents were conducting a court-authorized search as they investigate the potential mishandling of classified documents that were shipped to Mar-a-Lago.

To take such a step would require approval at the highest levels of the Justice Department. A department spokeswoman declined to comment when asked whether Attorney General Merrick Garland approved the step.

Trump said the raid was "unannounced" and claimed it was not "necessary or appropriate." The former president, without evidence, accused Democrats of weaponizing the "justice system" against him.

In a lengthy statement in which he equated the raid to Watergate, Trump accused the FBI of "even" breaking into his safe but provided no further details on what federal agents were looking for, or what else happened during their visit.

Trump nominated the current head of the FBI, Christopher Wray, to the position in 2017, after firing the previous FBI director, James Comey, amid a probe into whether any Trump campaign advisers had conspired with Russian operatives to influence the 2016 election.

Advisers said Trump was not at the club, which is closed in the hot months of Florida's summer, when the search was conducted. The former president has spent much of the summer at Bedminster, his golf resort in New Jersey, but on Monday he was in New York, according to a person familiar with his whereabouts.

Trump's team was given no heads-up about the search, several advisers said. Evan Corcoran, a lawyer representing Trump, did not immediately respond to a request for comment.

In January, the National Archives and Records Administration retrieved 15 boxes of documents and other items from Mar-a-Lago that Archives officials said should have been turned over when Trump left the White House.

Their action indicated that there were questions about whether Trump violated the Presidential Records Act, which requires the preservation of memos, letters, notes, emails, faxes and other written communications related to a president's official duties.

"The Presidential Records Act is critical to our democracy, in which the government is held accountable by the people," Archivist of the United States David S. Ferriero said in a statement in February.

At the time, Ferriero said in a statement that Trump representatives were "continuing to search" for additional records.

The inventory of unclassified items in the boxes that were already recovered from Mar-a-Lago is roughly 100 pages long, according to a person familiar with the unclassified inventory. Descriptions of items that were improperly taken to Mar-a-Lago include a cocktail napkin, a phone list, charts, slide decks, letters, memos, maps, talking points, a birthday dinner menu, schedules and more, according to this person.

"It's important to note that volume is only one way to quantify the documents that were taken," the person added. "But just one page -- or one portion of highly sensitive information being improperly released can cause great national security harm."

As for classification level, the ranges are from confidential to top secret to special handling categories, the person added.

Much is still unclear about investigators' understanding of the case, or why they would conduct such a search many months after the 15 boxes of material were retrieved. A sitting president is the top classification authority in the government, giving that person far more leeway than most government employees in deciding what is and isn't classified.

Advisers, speaking on the condition of anonymity to discuss Trump's actions, have said that he mishandled documents for years, largely by ripping them up. They described an ad hoc packing process at the end of his term, in which Trump and his family took boxes of material that should have gone to the National Archives. The archives only learned some of the material was missing after it tried to locate items for cataloguing.

Trump advisers have denied any bad intent, saying the boxes contained mementos from his presidency.

The search of Trump's home is the most aggressive to date by federal agents and prosecutors examining the conduct of the president and his inner circle of advisers.

Separate from the investigation into the handling of documents, a federal grand jury in Washington has been gathering information about efforts by Trump lawyers and advocates to try to use fake electors to block Joe Biden from formally becoming president after the 2020 election.

As part of that investigation, authorities have begun examining Trump's actions, seeking to understand, at a minimum, what instructions he gave to subordinates, according to people familiar with the investigation.

Federal investigators are also working up from their criminal investigations of the hundreds of Trump supporters who took part in the Jan. 6 Capitol riot to see who, if anyone, tried to orchestrate violence to stop the formal congressional ceremony confirming Biden's election victory.

It was not immediately clear on Monday whether the Justice Department has moved before to search the residence of a former president. In June 1975, Richard Nixon did meet behind closed doors with Watergate prosecutors and two grand jurors near his home in San Clemente, Calif. -- 10 months after leaving the White House and after he was pardoned by his successor, President Gerald Ford.

Trump once told a top adviser that he wanted "totally loyal" generals like the ones who had served Adolf Hitler -- unaware that some of Hitler's generals had tried to assassinate the Nazi leader several times, according to a new book about the Trump presidency.

Trump complained to John Kelly, then his chief of staff and a retired Marine Corps general, "why can't you be like the German generals?" according to "The Divider: Trump in the White House, 2017-2021" by journalists Peter Baker and Susan Glasser.

When Kelly asked which generals he meant, Trump replied: "The German generals in World War II."

"You do know that they tried to kill Hitler three times and almost pulled it off?" Kelly said, according to the book.

Trump didn't believe him, the book says. "No, no, no, they were totally loyal to him," Trump insisted.

An excerpt of the book, published Monday in The New Yorker, paints a picture of a president at conflict with his own military leaders, who were torn between resigning in protest and staying on as members of the Trump administration to prevent greater catastrophe.

According to those interviewed for the book, Trump's military leaders and advisers were regularly trying to pull back on Trump's desire to inflate his image and power, and to reconcile that desire with the values of the United States.

In one conversation from the book, Trump reportedly told Kelly he didn't want any injured veterans to be part of an Independence Day parade he was planning.

A spokesman for Trump had no immediate comment about the revelations in the book.

In another portion of the book, the authors describe how Gen. Mark Milley, the chairman of the Joint Chiefs of Staff, drafted a resignation letter in the days after military police fired gas canisters and used grenades containing rubber pellets, clearing racial justice protesters from Lafayette Square ahead of Trump's photo op in front of nearby St. John's Church.

That event and other recent ones had prompted Milley to do "deep soul-searching," Milley wrote in the letter, adding that he believed Trump was "doing great and irreparable harm" to the country. He wrote that he thought the president had made "a concerted effort over time to politicize the United States military" and that he no longer believed he could change that.

"You are using the military to create fear in the minds of the people -- and we are trying to protect the American people," Milley wrote. "I cannot stand idly by and participate in that attack, verbally or otherwise, on the American people."

Trump, he added later, did not seem to believe or value the idea, embodied in the Constitution, that all men and women are created equal. Lastly, Milley said he "deeply" believed that Trump was ruining the international order and causing significant damage to the United States overseas and did not understand that millions of Americans had died in wars fighting fascism, Nazism and extremism.

"It's now obvious to me that you don't understand that world order. You don't understand what [World War II] was all about," Milley wrote. "In fact, you subscribe to many of the principles that we fought against. And I cannot be a party to that."

Though the resignation letter was ultimately never sent, it showed the degree to which Milley believed Trump had already inflicted damage on the country. And though he was convinced by several not to quit, Milley would later fear two "nightmare scenarios" related to Trump's attempts to hang onto power at home, according to the book.

"Milley feared that Trump's 'Hitler-like' embrace of his own lies about the election would lead him to seek a 'Reichstag moment,'" Baker and Glasser wrote, referring to a 1933 fire in the German parliament that Hitler seized to take control of the country. "Milley now envisioned a declaration of martial law or a presidential invocation of the Insurrection Act, with Trumpian Brown Shirts fomenting violence."

Milley later feared that the Jan. 6, 2021, insurrection -- in which a pro-Trump mob overran the U.S. Capitol to try to stop the certification of Joe Biden's electoral victory -- was in fact that "Reichstag moment."

"They shook the very Republic to the core," Milley later said about the Capitol attack, according to the book. "Can you imagine what a group of people who are much more capable could have done?"

Information for this article was contributed by Perry Stein, Spencer S. Hsu and Amy B Wang of The Washington Post.