Mets extend lead thanks to Bassitt 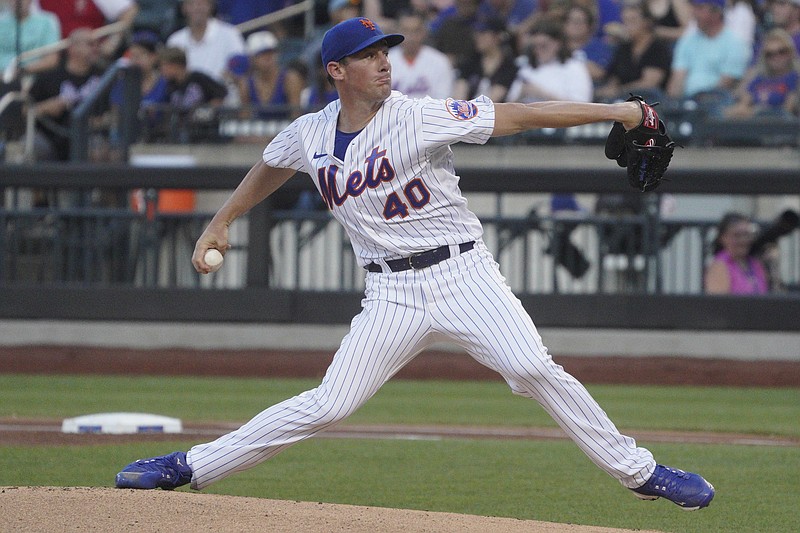 NEW YORK -- Chris Bassitt scattered eight hits over eight innings and Starling Marte hit a two-run homer in the first, leading the New York Mets to a 5-1 win over the Cincinnati Reds on Monday night.

Bassitt (9-7) allowed an unearned run and walked one while striking out eight in his second eight-inning outing this season and fifth in 114 career starts. He threw 114 pitches, most by a Mets starter this year and two shy of his career high set in August 2019.

Bassitt faced the minimum through three innings before wriggling out of trouble the rest of the night. The Reds scored in the fourth, when he induced three fielder's choice groundouts -- all from second baseman Jeff McNeil to shortstop Francisco Lindor.

The right-hander began a 1-6-3 double play to end the fifth and left the bases loaded in the sixth, when he got Aristides Aquino to line out.

Cincinnati stranded two more in the seventh before Jake Fraley was left at first in the eighth, when Bassitt struck out Aquino on three pitches following a visit from pitching coach Jeremy Hefner.

The Mets struck quickly against Reds starter and former New York prospect Justin Dunn (0-1), who was pitching in the majors for the first time since June 17, 2021. Leadoff batter Brandon Nimmo was hit by Dunn's fourth pitch and Marte homered well into the left-field seats two pitches later.

Daniel Vogelbach had an RBI single in the fourth and ex-Reds outfielder Tyler Naquin added a two-run triple in the eighth. Naquin was acquired from Cincinnati in a July 28 trade.

Joey Votto had the fourth-inning RBI for the Reds. Fraley and Jose Barrero got two hits apiece.

Dunn allowed three runs on 5 hits and 2 walks while striking out two in 4 2/3 innings. It was the first time he pitched against the Mets, who selected him out of Boston College in the first round of the 2016 draft and traded him to Seattle along with touted prospect Jarred Kelenic in the blockbuster deal that sent Robinson Cano and closer Edwin Diaz to New York in December 2018.

Naquin, who spent 1 1/2 seasons with the Reds, exchanged hugs with former teammates and Cincinnati staff members a few hours before first pitch.

McNeil singled to extend his hitting streak to 11 games. Lindor has scored in 11 consecutive games -- the longest streak of his career and best ever by a Mets shortstop.

CUBS 6, NATIONALS 3 Keegan Thompson pitched six effective innings, rookies Nelson Velázquez and Christopher Morel homered in the third inning, and the Chicago Cubs beat the Washington Nationals 6-3. Thompson (9-5) didn't walk a batter for the second time in three starts while scattering five hits over six innings. Luke Voit hit a homer off Thompson with one out in the sixth to end Thompson's shutout bid. Thompson has posted a 6-2 record and 2.40 ERA in eight starts at Wrigley Field. Cubs starting pitchers have posted a 2.87 ERA and nine quality starts in 19 games since July 16. Velazquez's homer highlighted the first three-hit game of his career. The Cubs (44-64) won for the third time in four games. The Nationals (36-75) dropped their sixth straight game and have been outscored 51-20 during that span. Anibal Sanchez (0-5) pitched five-plus innings, the longest outing by a Nationals starter during their losing streak. But Sanchez was pulled after surrendering singles to Seiya Suzuki and Patrick Wisdom to start the sixth. Nico Hoerner then hit reliever Steve Cishek's first pitch for a single to center field to score Suzuki.

ORIOLES 7, BLUE JAYS 4 Ramon Urias hit a three-run homer in the first inning, and Anthony Santander, Ryan Mountcastle and Austin Hays also went deep to lift Baltimore over Toronto. The Orioles, who entered the day two games behind Seattle and Tampa Bay for the final two wild cards in the American League, pulled within three of Toronto for the first wild card. This was the first of 15 meetings down the stretch between the Blue Jays and Orioles. Baltimore starter Jordan Lyles (9-8) yielded 2 runs and ei8ght hits in 5 2/3 innings. Felix Bautista got four outs for his fifth save. Cavan Biggio and Matt Chapman homered for the Blue Jays. Vladimir Guerrero Jr. extended his hitting streak to 19 games, longest in the AL this year. Yusei Kikuchi (4-6) allowed five runs and six hits in five-plus innings. Baltimore has won six of seven. 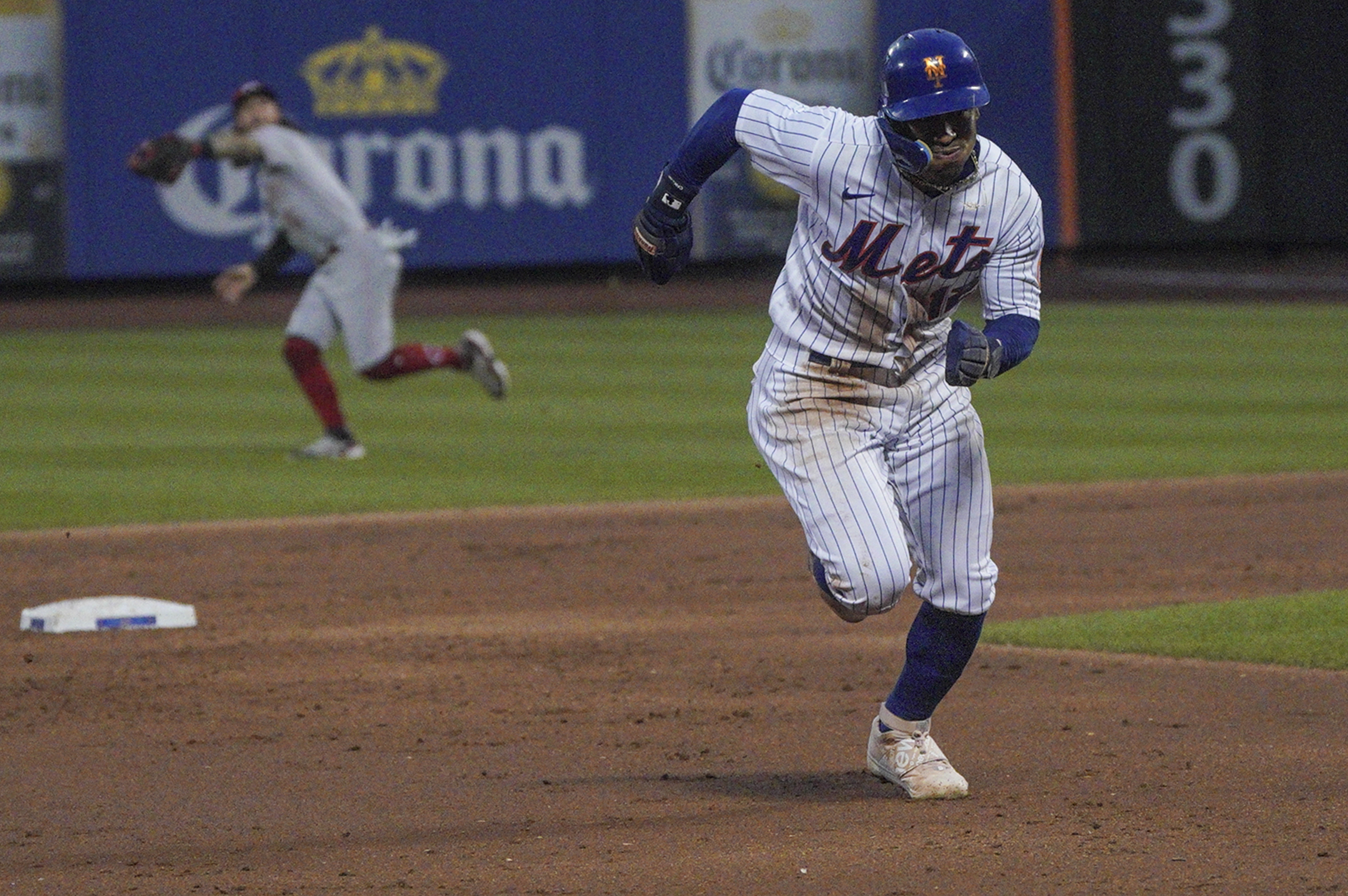 New York Mets' Francisco Lindor runs from second base to score aa run during the third inning of a baseball game against the Cincinnati Reds, Monday, Aug. 8, 2022, in New York. (AP Photo/Bebeto Matthews) 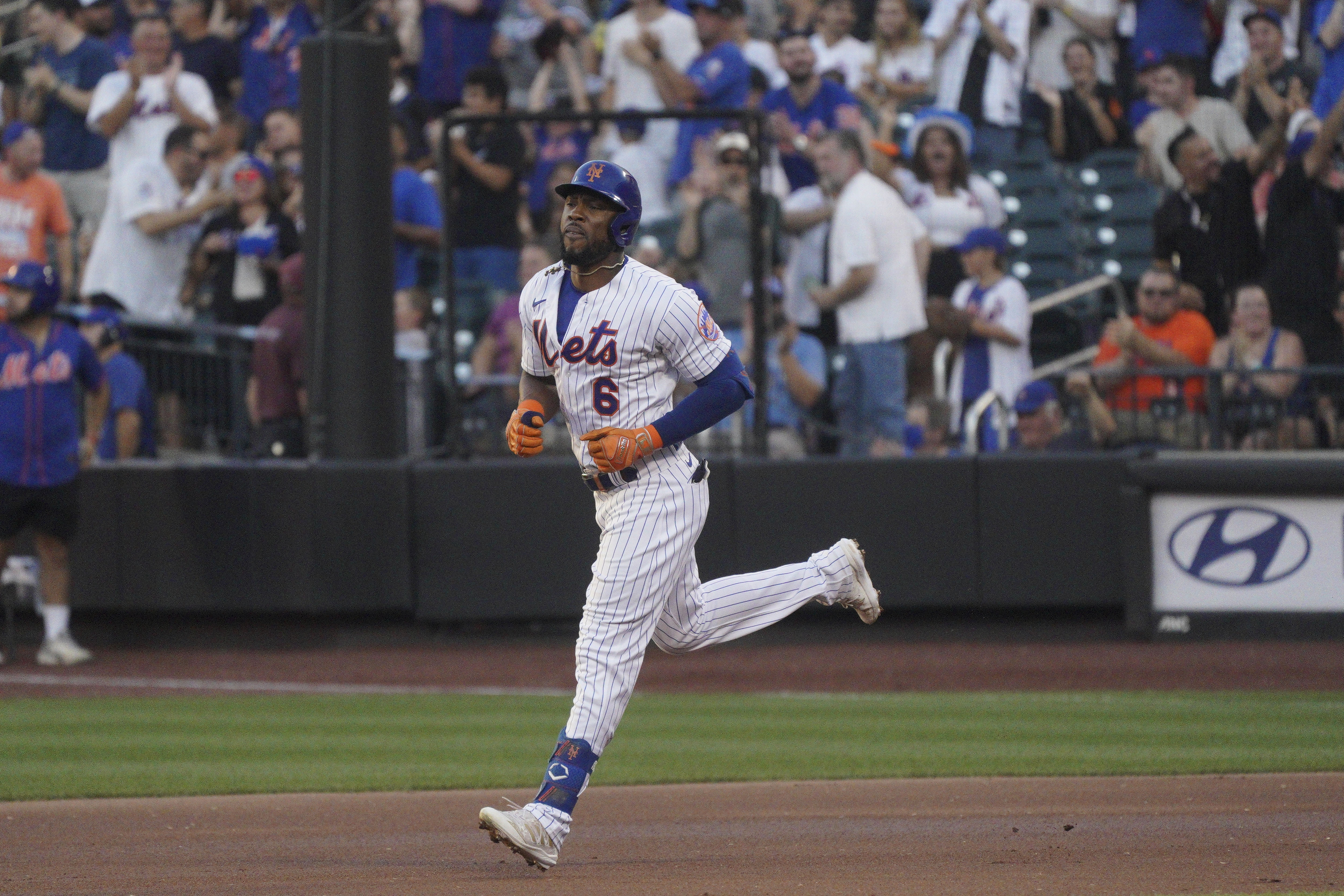 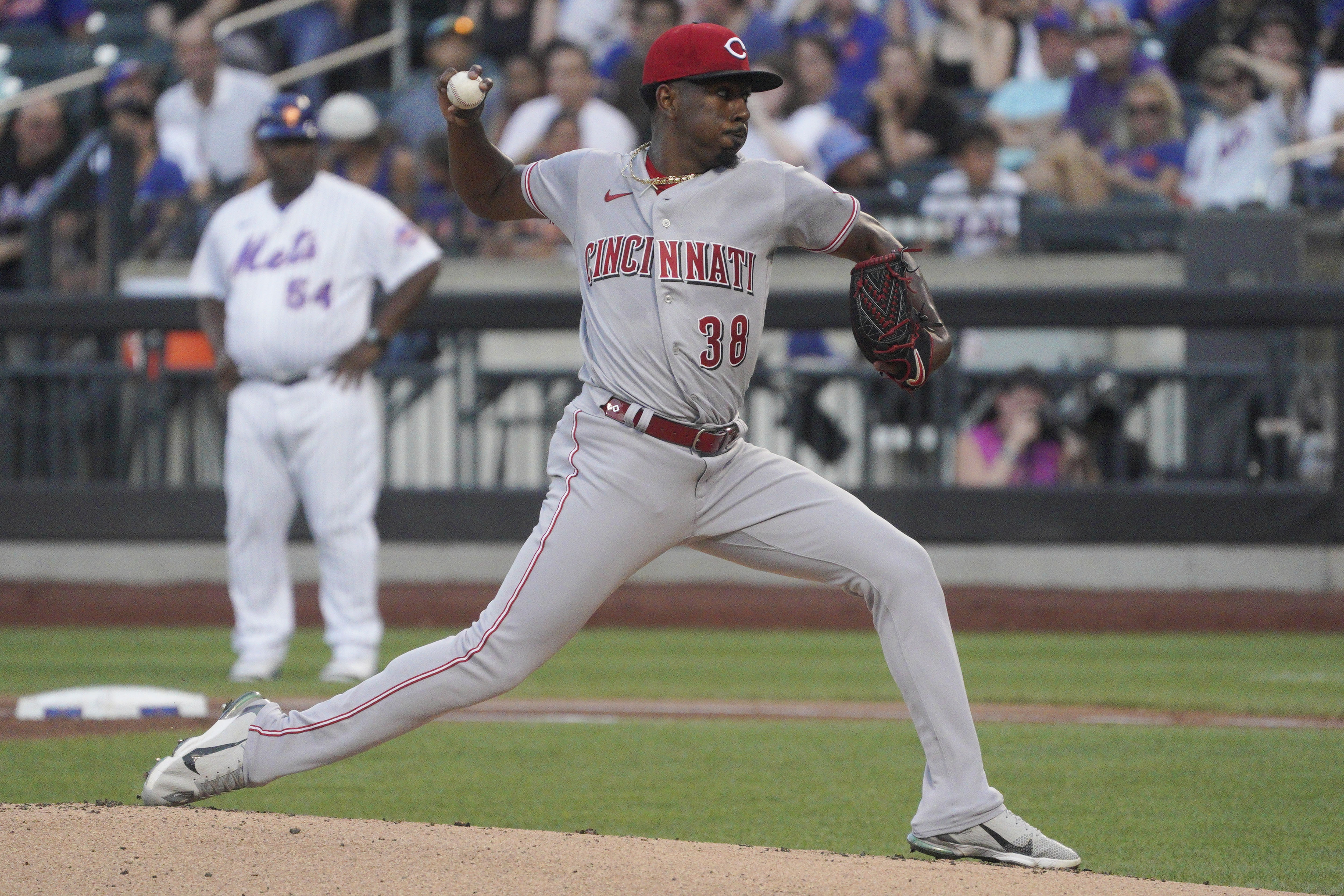 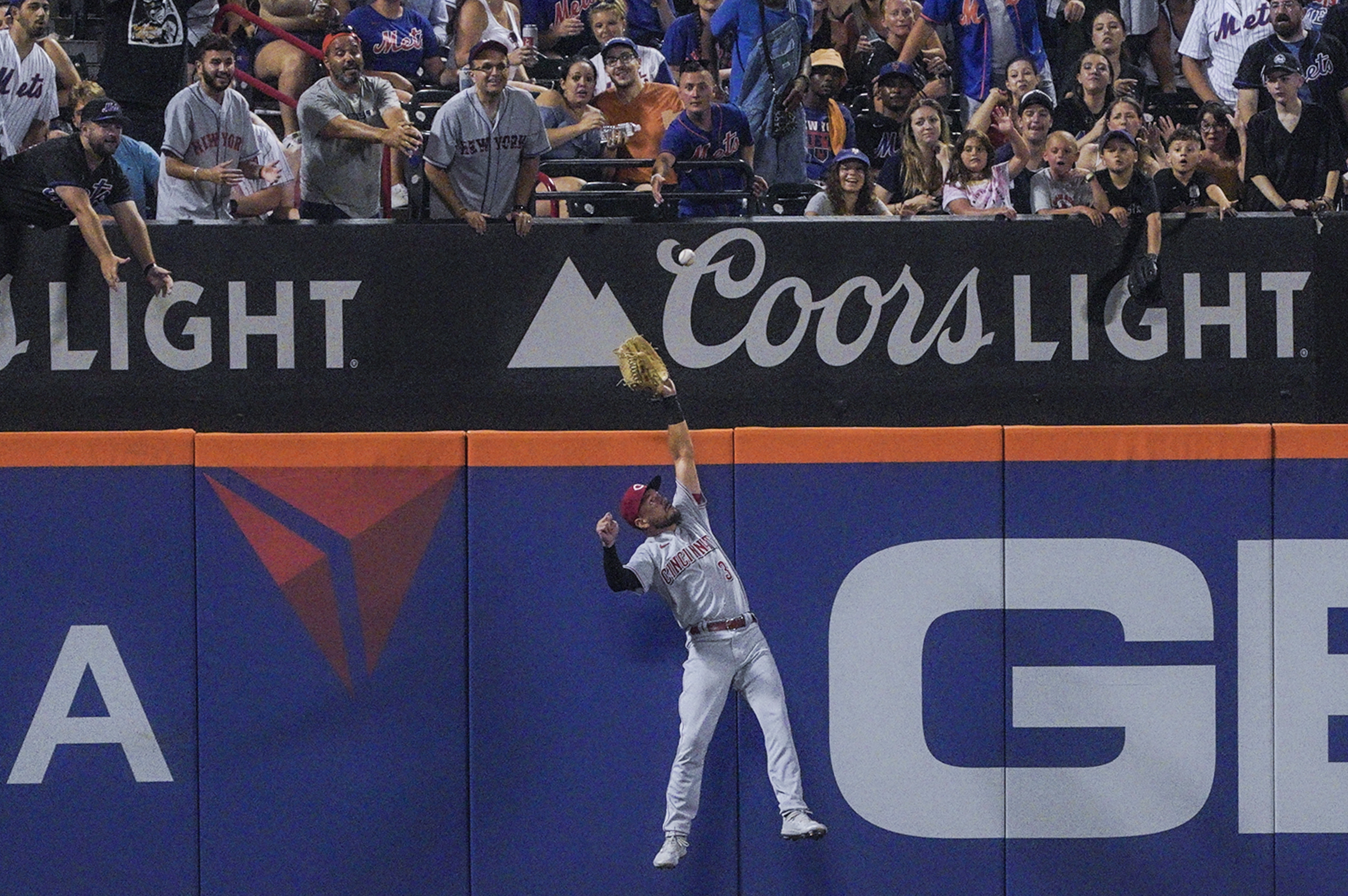 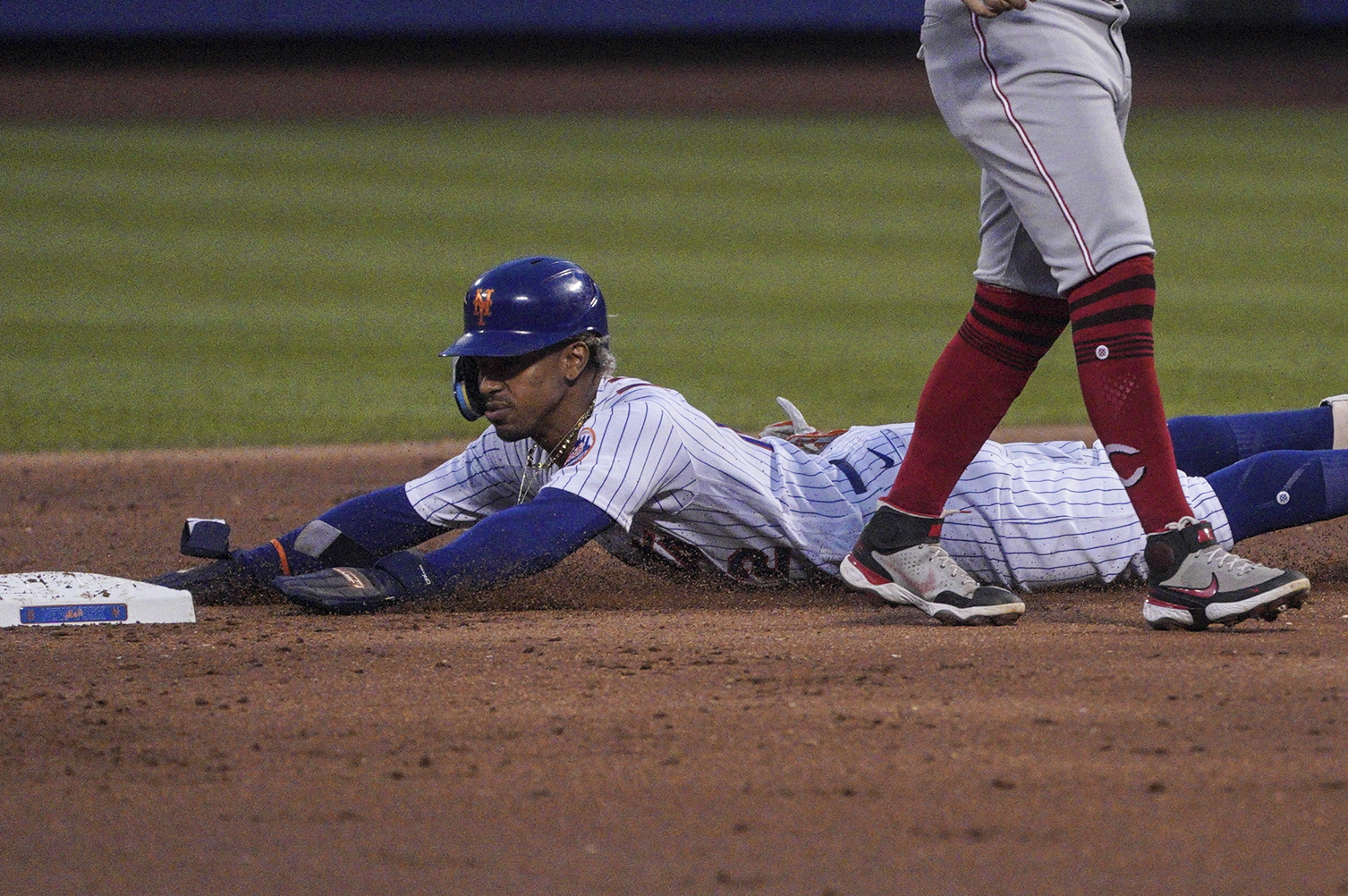 New York Mets' Francisco Lindor slides safely into second base during the third inning of a baseball game against the Cincinnati Reds, Monday, Aug. 8, 2022, in New York. (AP Photo/Bebeto Matthews)