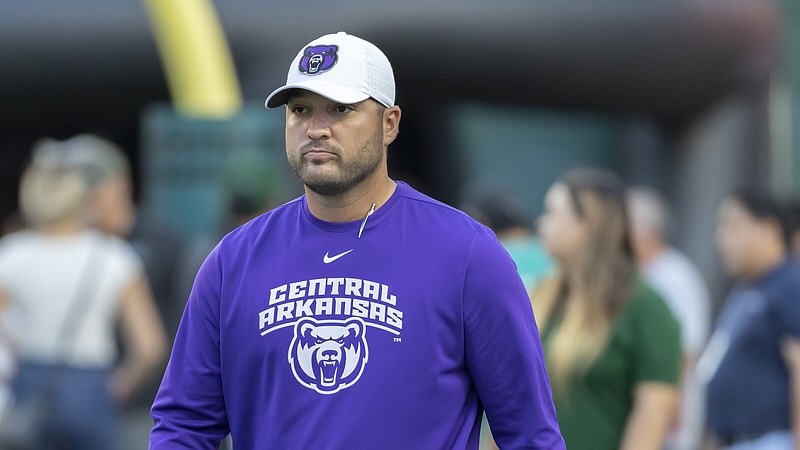 Central Arkansas Coach Nathan Brown said the Bears have the opportunity to make history as champions of the ASUN in its inaugural full season. Central Arkansas will be looking to improve on a 2021 season in which it finished 5-6, Brown’s first losing season at the school. (AP file photo)

CONWAY -- There were dozens of new faces at Estes Stadium as the University of Central Arkansas began its second week of fall practice Monday.

Bears Coach Nathan Brown added a 14-man freshman class and a transfer class of 21, as he looked to refresh a team that finished 5-6 last season.

As the new players get acclimated to life in Conway, defensive coordinator Matt Kitchens is settled and looking to build on his first year with the Bears.

"Anytime you're in the second year of a system, you should see more gains than you did the first year because the terminology is the same," Kitchens said. "The kids understand me, I understand the kids better."

The UCA defense spent much of last August learning Kitchens' scheme, but 12 months later the unit is starting to hone in on the finer details.

"I don't have to learn a whole new scheme now, I can really get even more detailed on it," fifth-year safety Cameron Godfrey said. "I can see where our weaknesses are and our strengths in coverage ... It helps us a lot."

The Bears' defense saw mixed results in Kitchens' first season. Holding the University of Arkansas-Pine Bluff to 23 points, Jacksonville State to 14 and Texas Wesleyan to 3 showed promise of what Kitchens and Brown had envisioned with his hiring. But surrendering 38 points or more in five of the season's first seven weeks showed that it wouldn't be an immediate success.

UCA allowed an average of 17 points per game over its final four games last season. Despite going 2-2 in those, it was clear that the defense had made promising strides.

Now, as Kitchens prepares for Year 2, Brown is hoping that his unit can carry that level of play into 2022 with a year of working in the system behind them.

"That's huge because you go through a fall, a full spring and a full offseason of Coach Kitchens and what he's trying to bring to the table," Brown said. "So guys can go out there and just play fast. When [they're] thinking, you don't see the best version of the player. So, as guys are going out there and they understand what we want out of them, then they just go out and react and play fast. And so that's what I've seen throughout spring and even into these first few practices of fall camp."

UCA is returning five starters from last season's defense, but they are some of its biggest playmakers.

Defensive end Logan Jessup led the Bears with five sacks and 11 tackles for loss last season. TaMuarion Wilson led the team with 66 tackles from his safety position. Backfield partner Godfrey added 37 tackles of his own.

Brown has said that the 19 sacks his team managed in 2021 were not enough. He heavily recruited defensive lineman in hopes they would help remedy those numbers. UCA added four transfer linemen that combined for 38 tackles for loss and 25 sacks last season.

"I think we've done a good job recruiting certain positions, especially on the defensive front," Brown said. "We didn't have a very good pass rush last year, and I think we addressed that issue."

The Bears are replacing both starting cornerbacks, so having Wilson and Godfrey to lean on has been crucial as younger players like T.D. Williams, Laquez Embry and James Jordan come along.

"They're the quarterbacks of the defense back there," Kitchens said. "There [are] not many days since I've even been here in the last year and a half that they've made a bad check, they've made a bad coverage call. They do a great job. I'm very thankful and happy to have them."

"Me and [TaMuarion] are a little more experienced back there, so we just kind of guide the corners in the right way," Godfrey said. "I think we're working really good as a team as camp goes further and further, and we know what to expect."

"Coach Kitchens is a great football coach," Brown said. "I've been around him a long time. He's had and been a part of, a ton of successful defenses in his coaching career. I think the players are getting a chance to be in a system a year more now. They know what his expectations are, they know his style of coaching and I think you're gonna see us thrive. ... I'm excited about watching Coach Kitchens, and seeing what he's going to bring to the table in Year 2 as the defensive coordinator."