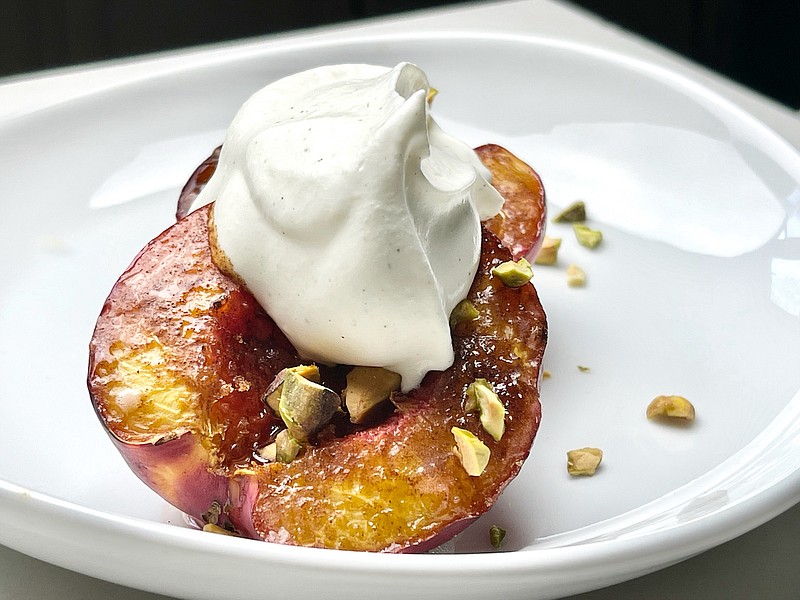 This dessert is so simple it doesn't really need a recipe, but I wrote one anyway because that's what I do.

My inspiration was a bowlful of nectarines from Barnhill Orchards in Lonoke and a carton of Country Crock Plant Cream, a heavy whipping cream alternative made from plant proteins and fats.

I bought the fruit. The plant cream was a sample sent to me by a PR agency.

In our dating days my husband was a huge fan of Country Crock buttery spread. He preferred it for its cold-from-the-fridge spreadability. I eventually converted him over to real butter. (Sorry, Country Crock.)

I've tried a variety of alternatives to whipped cream — Cool Whip and its copycats, Almond Reddi-wip, the thick layer of coconut fat skimmed from the top of a can of chilled coconut milk — mostly out of professional curiosity, not because I'm interested in ditching dairy. However, my curiosity has been deepened lately after a family member learned she was lactose intolerant after a lifetime of dairy enjoyment.

The problem I've found with most dairy-free alternatives is sweetness. They're cloyingly sweet, making them unsuitable for anything but dessert. The second major issue is flavor. Coconut-milk fat whips beautifully without any added sugar, but it still tastes undeniably like coconut.

All that is to say that when I read that the Country Crock Plant Cream was made without coconut and contained very little sugar, I was eager to give it a try.

So what are the ingredients?

The sugar, apparently, isn't enough to be required to list in the nutrition facts. According to the package, the plant cream contains 45 calories, 4.5 g fat, no protein, no carbohydrates and 5 mg sodium per 1-tablespoon serving.

I chilled the cream and my mixing bowl as I usually do. Chilled cream whips better, and on a warm summer day, chilling your bowl is always a good idea.

As I poured the cream from the carton I dunked my finger to give it a taste. It had very little flavor. The texture was a bit thicker than half-and-half, but not as thick as heavy whipping cream.

It took about two minutes on medium-high speed with a handheld electric mixer to whip up medium-firm peaks. It looked just like real whipped cream. But — of course there's a but — the flavor and mouthfeel were lacking. It was pleasant enough to eat, but it was lacking that je ne sais quoi that you only get from the real thing.

If you can't eat the real thing, Country Crock Plant Cream might be the best consolation cream.

According to the store locator on the Country Crock website (countrycrock.com/store-locator), the whipping cream alternative is available at many grocery stores around the state.

[Video not showing above? Click here to watch: arkansasonline.com/810burner]

Heat broiler on high or heat oven to 450 degrees. Arrange nectarine halves on broiler-safe pan, cut side up.

In a small bowl, stir together the sugar and cinnamon. Sprinkle sugar mixture evenly over the nectarines.

Broil or bake until sugar is caramelized, about 8 minutes.

Serve warm sprinkled with pistachios and a dollop of whipped cream.

I prefer unsweetened or very lightly sweetened whipped cream. If you like your whipped cream sweet, add up to 2 tablespoons of confectioners' sugar. For the fastest, easiest whipping, chill your mixing bowl before whipping. This makes more whipped cream than you'll need for the nectarines.

Beat the cream and vanilla in a mixing bowl with an electric mixer or hand whisk until thickened. Slowly add the sugar, if using, and continue beating or whisking until cream holds soft to medium peaks. Be careful not to over-whip or cream will be grainy and could eventually break.