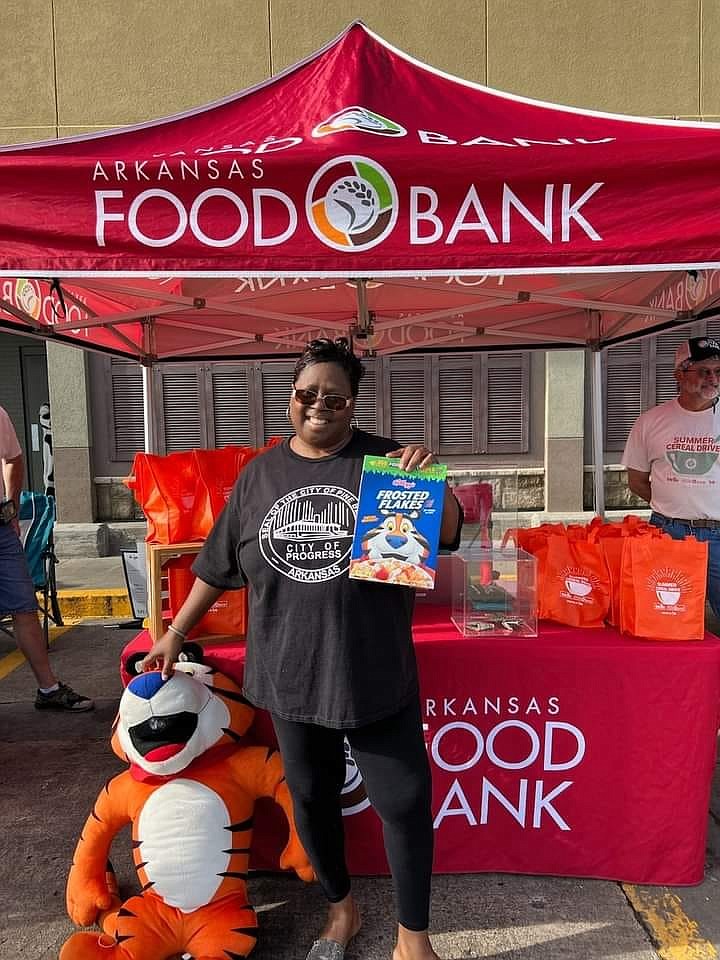 Debra Allen was recently selected for the Arkansas Food Bank Community Partner Award for the 2022 Summer Cereal Drive. (Special to the Commercial)

When Debra Allen got the news that she would no longer be able to use the old Southeast Middle School as a distribution center for her The First Ward/Living Grace Food Pantry, she said the news didn't bother her one bit simply because she knows "God got me."

Allen, who was recently selected for the Arkansas Food Bank Community Partner Award for the 2022 Summer Cereal Drive, founded the food pantry in 2017 to fight hunger in Pine Bluff and Jefferson County.

Almost four years later, she heard the city of Pine Bluff was interested in the school, and she received confirmation of the purchase earlier this year.

In January 2021, the Pine Bluff Urban Renewal Agency approved the acquisition of the school, 2001 S. Ohio St., which is owned by the state Education Department. The property was of value to Mayor Shirley Washington, who has envisioned using the site to improve the quality of life in Pine Bluff.

By forming a partnership with the Pine Bluff Housing Authority, city administrators wanted the property to offer affordable living. During that time, an investor had been secured who would bring in approximately 200 affordable housing units in the area.

"I always knew it was coming, I just didn't know when because the city had just bought [the old First Ward School] for a men's shelter," Allen said. "When I got the information, I didn't let it bother me."

When Allen first started the food pantry, she would drive from Pine Bluff to Little Rock to fill up at the Arkansas Foodbank. To date, approximately 800 vehicles drive through each month to pick up what is available. From steaks, hamburger meat, pizza, chicken, fruits and vegetables to household items and toiletries, Allen said this is one of the biggest and most popular food pantries because it caters to the needs of the community in a big way.

Giving thanks to the donors and a network of partnering agencies, Allen said this was something she spoke into existence more than five years ago and the people who believed in her vision helped her make it happen.

"I just woke up one morning and said I'm going to see what I have to do to be able to do a food pantry," said Allen, who added that it was on her heart to serve the community. She said she reached out to former Pine Bluff Council Member Thelma Walker, who put her in touch with her godson, Booker Franklin, who was the executive director of operations for the Pine Bluff School District.

"They knew that I was already giving out, sometimes buying the food with my own money," said Allen, who has been able to grow the pantry in that building without having to pay the utilities.

"Plenty of people wanted me out of the building," Allen said, "... but God had a greater plan."

Allen said food insecurity was taking over households, especially during the pandemic, with families having to make trade-offs between important basic needs or buying groceries.

Waiting for food boxes, toy giveaways, school uniforms and backpacks, drivers would be lined up for hours down Ohio Street. In some instances, the Pine Bluff Police Department or the Jefferson County Sheriff's Department would be on the scene directing traffic because of the high demand for the community giveaway.

Allen said the overwhelming community response gave her all the more reason to keep doing what she was destined to do from her heart -- serve the community. She also gave credit to her small circle, who stood by her side in the beginning when the pantry was just getting off the ground.

"They were my soldiers," Allen said. "Then this past two years, I got my army."

"Bill Jones would always tell me, I know you had many helping you but now you have an army -- me, Sharri and Momma. I am so thankful for their generous contributions because it shows that the hard work of the volunteers at the First Ward/Living Grace Food Pantry was being noticed."

Dushun Scarbrough of the Arkansas Martin Luther King Jr. Commission took notice of Allen's service to the community and will be recognizing her efforts, as well as those of other statewide organizations, at 10:30 a.m. today at the Victory Building Conference Room, 1401 W. Capitol, in Little Rock.

Allen will be presented with a microgrant from the commission, in partnership with the Arkansas Department of Human Services, to help sustain and expand her efforts.

"After receiving the grant from the Department of Human Services, we wanted to partner with small community-based organizations to support their work, which is already in progress," Scarbrough said.

Other recipients of the grant include:

"I really admired Debra Allen and the volunteers of the food pantry and the difference they were making in their community," Scarbrough said.

Scarbrough said shortly after meeting Allen, she became a partner with the King Commission and assisted with the efforts to promote King's principles of nonviolence in her own community.

The mission of the King Commission, a division of the Arkansas Department of Education, is to promote and preserve the life and legacy of King in Arkansas and to promote the principles of nonviolence and equality among all citizens.

Commending Allen for the excellent work she is doing in the community, Scarbrough said he hopes the grant will help assist her as she seeks a new distribution space.

Allen, who said she has about one year before she has to leave the building, hasn't really thought of a plan or decided what her next move will be. Pine Bluff Mayor Shirley Washington, when speaking about the middle school, said she was currently seeking a building where Allen could relocate.

"I'm not forgotten. I don't have any plans, but God knows the plans he has for me," Allen said. "I know God's got it. He will have something better, so I can't be worried about that." 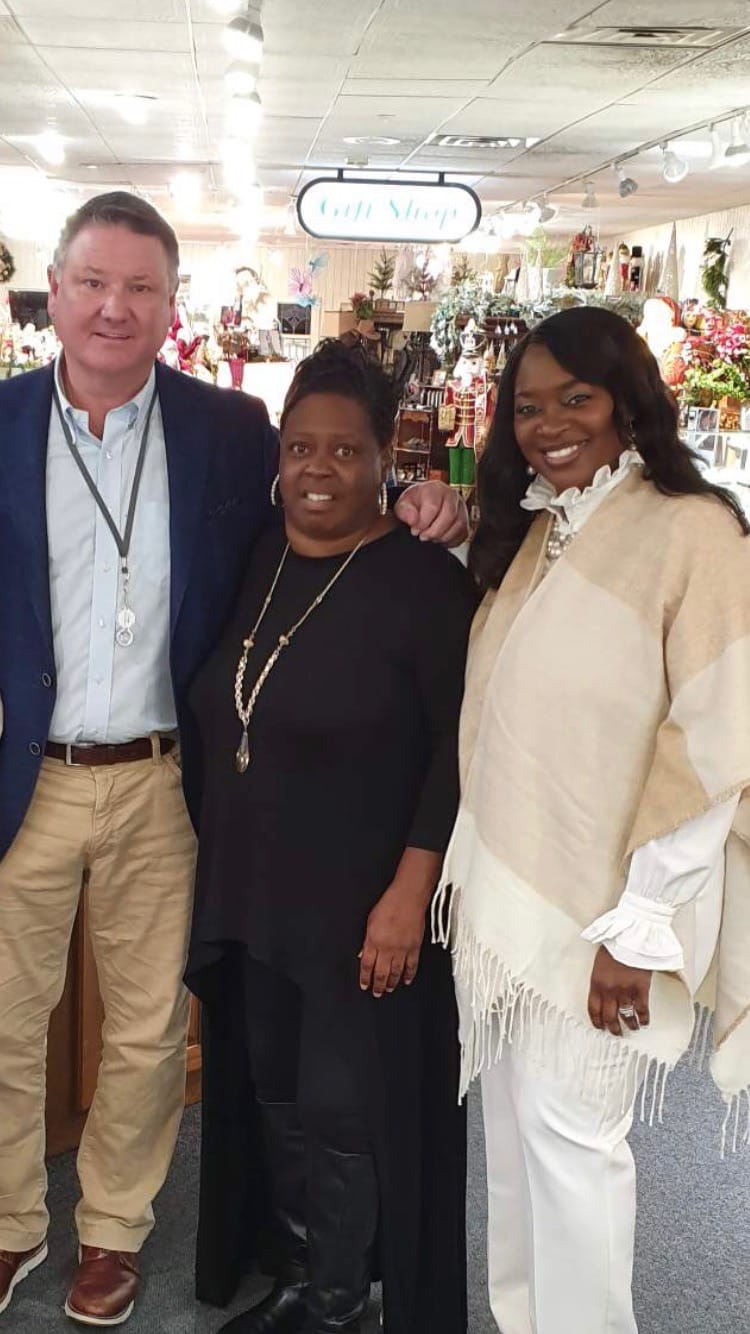 Debra Allen (center) is pictured with Bill Jones, CEO of Sissy's Log Cabin, and Tiffany Copeland, grant writer for the city of Pine Bluff. (Special to the Commercial) 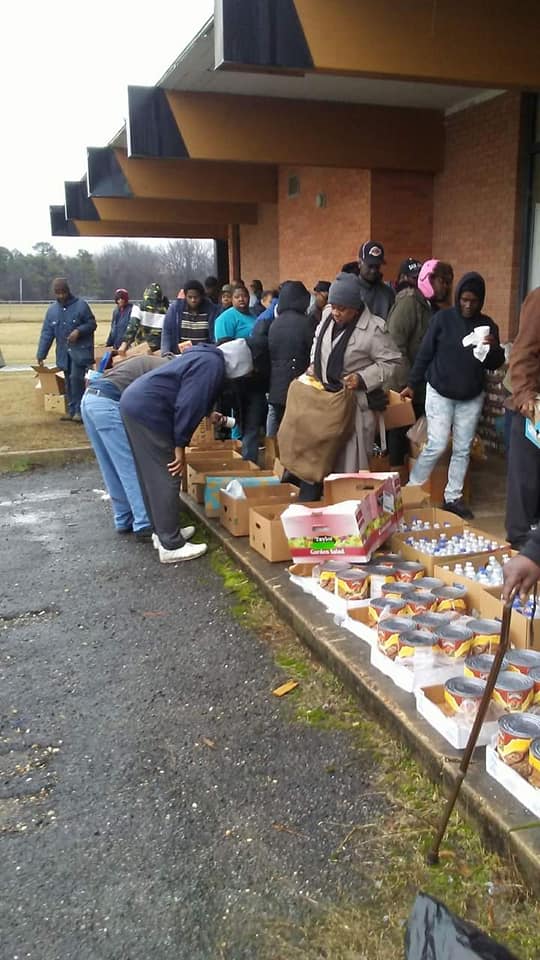