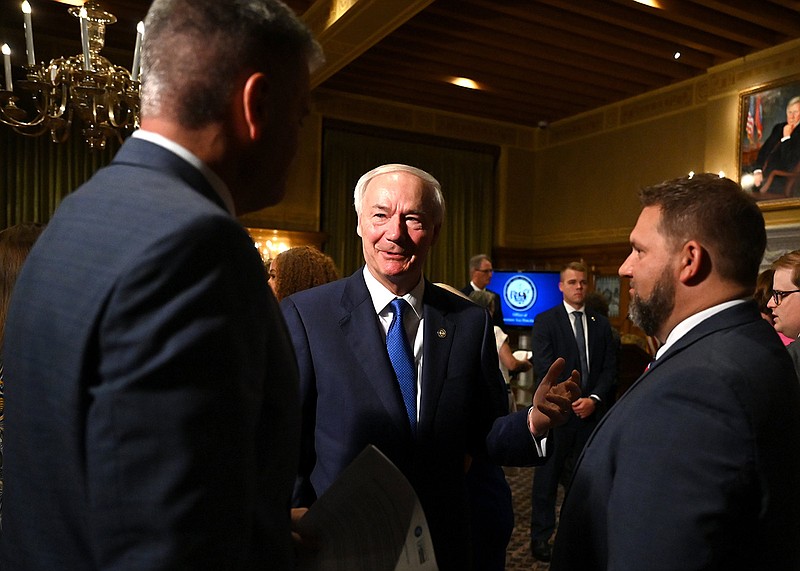 Governor Asa Hutchinson, center, talks with Arkansas Senator Colby Fuller, R-Springdale, left, and Arkansas Representative Jim Dotson, R-Bentonville, after a press conference announcing new initiatives from the Arkansas Department of Human Services and Arkansas Department of Health aimed at improving maternal health in light of the state's new law to ban abortion except to save the life of the mother in a medical emergency during a press conference at the Arkansas State Capitol on Tuesday, Aug. 9, 2022. See more photos at arkansasonline.com/810ledge/ (Arkansas Democrat-Gazette/Stephen Swofford)

Gov. Asa Hutchinson announced Tuesday he will seek to expand Arkansas' Medicaid programs to include more coverage for new and expecting mothers.

Arkansas has one of the highest rates of infant mortality in the nation, but has made incremental improvements in the past decade, Hutchinson said.

"When it comes children's health and well-being, we've made progress in the state of Arkansas but we have to do more," Hutchinson said during a news conference.

The plan is for the state to leverage federal dollars from the American Rescue Plan Act to expand Medicaid coverage for pregnant women in the state.

The state seeks federal approval to expand its Medicaid program for at-home visitations for high-risk pregnant women, called Maternal Life360 HOMES. The Arkansas Department of Human Services also will provide funds for additional training to help identify postpartum depression. The program is expected to provide services that will include behavioral health and non-pregnancy care for an additional 5,000 mothers, Hutchinson said.

The expansion of the state programs needs federal approval, which is likely to come in September, Hutchinson said. The changes to regulations by the Department of Human Services also would be subject to review by the Arkansas Legislature.

Arkansas has one of the highest infant mortality rates in the country, ranking behind only Mississippi, Louisiana and West Virginia, according to the Centers for Disease Control and Prevention.

Dr. William Greenfield, a professor of obstetrics and gynecology at the University of Arkansas for Medical Sciences, said it was hard to attribute one factor to Arkansas' high mortality rates for infants, but said a lack of access to health care and services is a contributing factor.

"You have babies that can have a mother that is not equipped to handle them, they are just simply going to need support," Greenfield said.

Loretta Alexander, health policy director for Arkansas Advocates for Children, said she supports the state expanding coverage for pregnant women but said it didn't go far enough. Alexander said many women, who are too poor to afford their own healthcare but fall just above the federal poverty line, need more than 60 days of post-natal coverage.

"We have been recommending that the state Medicaid program cover up to 12 months postpartum," Alexander said.

Alexander said the governor also should have moved to have women get approved for Medicaid coverage quicker as many mothers wait months before they are covered.

The announcement comes about six weeks after an Arkansas law banning abortion, except in cases where the mother's life is threatened, came into effect. The U.S. Supreme Court's decision in Dobbs v. Jackson Women's Health Organization cleared the way for states to outlaw abortion.

Hutchinson said the state was already in the process of expanding Medicaid services to mothers when the state's abortion ban took effect, but said Arkansas needs to expand services when abortion is no longer a legal option in the state.

"That obviously calls for an increased level of investment and support," Hutchinson said. "While we started all this previously and early on, the need has increased obviously with the expectation we're going to have more live births, more children in need, more moms that need assistance."

Alexander said Arkansas already has a high teen pregnancy rate and the state's new abortion ban underscores the need to double down on expanding health care coverage to at-risk women.

According to a Department of Human Services spokesperson, there were 4,520 children in foster care as of June.

"This will send a signal we want to provide some support for these families that are taking on this extra responsibility," Hutchinson said.