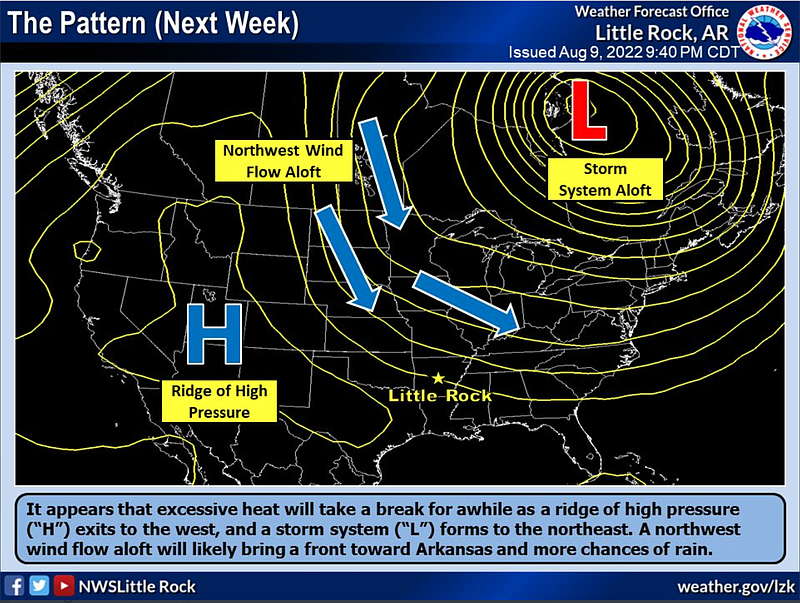 This graphic posted Tuesday night by the National Weather Service shows the ridge of high pressure that has been near the state and the storm system that is predicted to enter Arkansas when the ridge moves west.

Isolated storms popped up over Arkansas earlier this week, and forecasters said Wednesday to expect more of the same next week as a ridge of high pressure moves out west.

A ridge of high pressure has been blocking storm systems from entering Arkansas, according to Travis Shelton, a meteorologist with the National Weather Service in North Little Rock.

The ridge will move out west on Tuesday, but should return before the end of next week, Shelton said Wednesday.

Once the high pressure has exited the state, forecasters predict that a storm system will arrive and provide more chances of rain.

“It will be the same isolated and scattered precipitation that some have seen throughout the state,” Shelton said. “Thunderstorms will have a higher chance of appearing in the afternoon and evening hours.”

Scattered storms are still forecast to pop up in the state today, Shelton said, with increased chances later in the day.

Monday saw rainfall across Arkansas, with Pope, Stone and Ashley counties receiving about 2 to 2 1/2 inches of precipitation, Shelton said.

“There were lots of trace amounts and some wind damage, and a few people saw pea-sized hail,” Shelton said.

The meteorologist said Pulaski and Garland counties reported severe wind damage due to a thunderstorm.

Shelton said Little Rock Air Force Base had the strongest winds, with sensors picking up speeds above 40 mph on Monday. The Garland County sensor showed speeds around 40 mph as well.

Both counties reported large trees down, and power lines and poles damaged.

The storm caused a peak of 23,000 outages, mainly affecting people in Little Rock, Hot Springs and Pine Bluff, Entergy said in a news release on Monday.

While the rain is keeping the 100-degree days at bay, Shelton said it is not enough to relieve drought conditions.

“Temporarily, sure, it will help,” Shelton said. “What we need is continuous widespread rainfall without several dry periods between them. Without that, we can expect drought conditions to continue.”

The U.S. Drought Monitor shows that most of Arkansas, excluding some parts of a few southwestern counties, was abnormally dry or worse as of Thursday.

Just over 20 counties still have a burn ban in place, as shown on the burn ban map from Arkansas Department of Agriculture.

Barry Hyde, the county judge of Pulaski County, on Tuesday lifted the burn ban that went into place on July 6, writing in the order that extremely rapid drying conditions had been relieved.

“Recent rainfall of uniform distribution throughout Pulaski County has relieved this hazardous condition, and it is appropriate at this time, and by this order, to remove the ban on outdoor burning,” Hyde stated in the order.

The state Agriculture Department’s wildfire danger map shows that most of the northern and parts of central Arkansas, including Pulaski County, are at a low level for wildfire danger.

The rest of the state remains mostly at a high risk for wildfire, with nine counties at a moderate risk as of Wednesday afternoon.