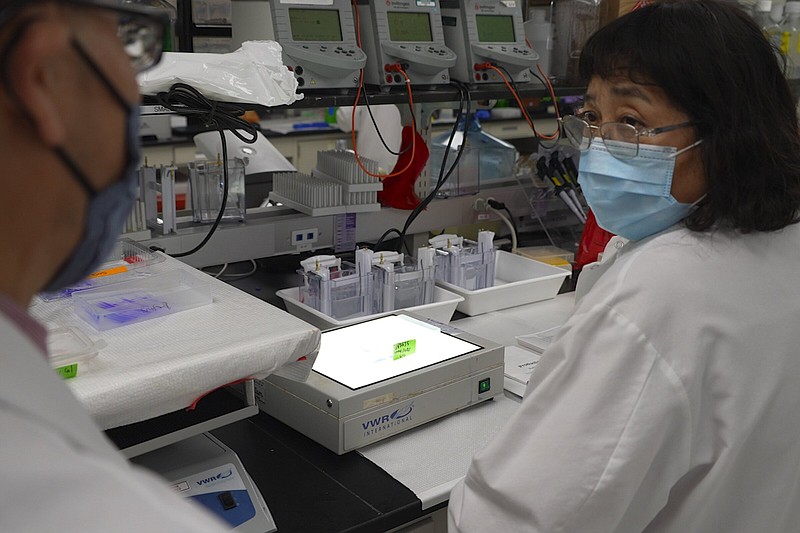 Scientists work on the vaccine purification process as they design updates to the Novavax's COVID-19 shots in the company's research laboratory on May 24, 2022, in Gaithersburg, Md. The U.S. Food and Drug Administration is deciding whether to authorize use of Novavax’s more traditional kind of COVID-19 vaccine, which the company hopes can win over unvaccinated people and become a top choice for boosters. (AP Photo/Angie Wang)

Novavax Inc. shares lost a third of their value after its covid-19 vaccine -- which trailed competitors getting to market -- failed to live up to expectations and the drugmaker slashed its 2022 revenue forecast.

Sales for the year will be as much as $2.3 billion, which is less than half an expected peak of $5 billion, the company said Monday in a statement. Novavax also reported a second-quarter loss of $6.53 a share, which was wider than analysts' average estimate of $5.24.

The Gaithersburg, Maryland-based company's shares cratered, falling as much as 36% after U.S. markets closed Monday. They were trading down 29.64% in trading Tuesday to close at $40.28.

Chief Executive Officer Stanley Erck said the "significant shortfall" in revenue was mostly due to changes in expectations from two major markets: the U.S. and the Covax program, which obtains vaccines for low- and middle-income countries.

Demand fell in the U.S. and globally, Erck said on a conference call with analysts and investors.

"In the case of the U.S., I believe we were late to the market, and U.S. vaccination was driven by what was available and shown to work: mRNA vaccines," Erck said.

Novavax received about $1.6 billion from the U.S. government to develop its vaccine through the Operation Warp Speed program.

The immunization uses a protein-based technology that's similar to classic shots. Company officials had anticipated that the vaccine might appeal to those who have been hesitant to take shots made with newer technologies, but demand hasn't appeared strong so far.

The company "adjusted guidance for 2022 to account for several evolving market dynamics," according to an emailed statement. "We have shipped over 23 million doses since the beginning of July, and while in some cases delivery timing may be pushed into 2023, we do not expect total contracted demand to change under the majority of our advance purchase agreements."

"We already had a view that demand wasn't measuring up and that any prospects for additional orders late into the year were a little bit risky," said Max Nisen, an equity associate analyst at Bloomberg Intelligence.

Novavax is also well behind in some strain updates relative to mRNA-focused rivals, Nisen said, and other omicron-tailored vaccines are likely to already be available by the time Novavax gets its booster doses authorized.

The U.S. has ordered a combined 171 million doses of next-generation vaccines by Pfizer Inc. and Moderna Inc. that are tailored to the currently circulating omicron variants and expected to be rolled out in September.

Novavax expects to file for FDA authorization of its omicron-containing vaccine in the fourth quarter of 2022.

The company grappled with manufacturing delays during the early days of the pandemic, which prevented its shot from being a key player in the U.S. vaccination drive. After Novavax secured federal funding, the setbacks pushed Novavax's U.S. clinical trial back to December 2020.

By that time, covid-19 vaccines developed by Pfizer and Moderna had already been given the regulatory green light.

Optimism for the vaccine had pushed Novavax's shares to an all-time closing high of $319.93 in February 2021, but it has since fallen on investor concern that its shot might not be widely used.

Novavax's stock is prone to extreme swings, notching large single-day losses and gains on news about the company's shot.

Last month, for example, the shares shed roughly a quarter of their value amid concerns about potential allergic reactions. Through the close of trading Monday, Novavax shares had fallen 73% over the past 12 months, giving it a market capitalization of $4.47 billion.

Despite the slashed forecast, Novavax still has the potential to own as much as a 30% share of a future covid-19 vaccine market that could be worth $5 billion to $10 billion, Roger Song of Jefferies said in a note. The analyst cut his price target to $145 from $190, but maintained a buy rating.

Information for this article was contributed by Timothy Annett and Tim Loh of Bloomberg News.