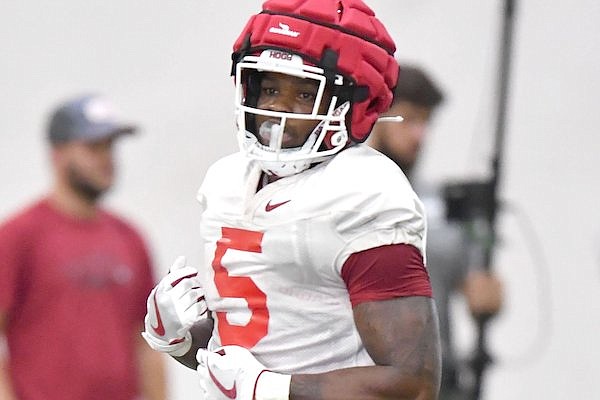 Arkansas running back Raheim Sanders (left) carries the ball Friday, Aug. 5, 2022, during practice at in Fayetteville.

FAYETTEVILLE -- Sophomore Raheim Sanders showed exactly why he's tailback No. 1 during a pass protection drill that highlighted the early period of practice No. 4 of fall camp for the University of Arkansas on Tuesday.

The Razorbacks worked inside the Walker Pavilion as thunderstorms cropped up most of the morning and crept into the early afternoon.

The temperature was noticeably reduced with the added cloud cover, touching 77 degrees at the start of the workout and reaching into the high 80s by the end.

Arkansas did not feature its "fastball starts" in the final workout before full pads go on Thursday, but there was still plenty of physical action.

Sanders took the lead in the pass protection segment with running backs matched up against linebackers. On the first rep he held senior linebacker Bumper Pool at bay in which Sanders' upper and lower body strength was on display.

The 6-2, 221-pounder, who has moved into the top spot that fellow sophomore A.J. Green said he has "definitely earned" with an injury to Dominique Johnson, went on to dominate reps against walk-on Mason Shueck, whom he de-cleated, and Kaden Henley, both freshmen.

Pool did not take another rep during the period.

Green was nearly as successful as Sanders, largely winning his three reps against Drew Sanders, Mani Powell and Henley, though he got a little grabby and the defenders made more progress into the pocket than they did against Sanders.

At the same time this was going on, the offensive linemen were battling their defensive counterparts, and tight ends were taking on defensive ends and hybrid-type players. The receivers and defensive backs also matched up, and their period was devoted to one on one pass plays in the red zone.

The backs behind Sanders and Green had more struggles at holding out the variety of linebackers, with Rashod Dubinion and James Jointer having to repeat a few reps after allowing pressures.

Freshman linebacker Jordan Crook's fast-twitch footwork was on display as he had a couple of snaps that led to quick pressure, highlighted by an impressive blitz vs. Javion Hunt. He was stymied by walk-on Dennis Daniels late in the period.

Jackson Woodard had an impressive rep vs. Dubinion that resulted in a lightning-fast trip to the quarterback spot.

Linebacker Christopher Paul had a clear win over Jointer but also a couple of standoffs with Dubinion and he did not stay on his feet well enough. Jointer rebounded to win a couple of his late reps.

Receivers coach Kenny Guiton said freshman Isaiah Sategna's carryover from track season is playing out during camp as the Fayetteville High standout is quickly gaining ground after not enrolling early.

"That's what we want him to do," Guiton said of Sategna's separation ability. "There are types of things that he's really, really good at with his track background.

"Track speed is different. A young guy coming in doesn't have all that taxing on his body, so right now he's running by a lot of guys, and that's what he's asked to do. ... Keep progressing him and give him a chance to compete, and keep watching him do his thing."

The quarterbacks and receivers were well on the same page with not a visible drop during an early segment of practice. The work was "on air" so a high completion percentage is expected. Still the routes were crisp and balls were largely delivered right on time.

Freshman Sam Mbake made probably the most impressive grab, a slide in which he grabbed a pass about ankle high delivered by Cade Fortin. Later in one-on-one drills, the 6-3 Mbake rose to high point a catch over corner Hudson Clark.

Defensive tackles Cam Ball and Taylor Lewis were not available for the practice. Ball was rushed to the hospital late in Sunday's workout and was undergoing tests to determine what affected him at the practice.

Lewis' absence was for an undetermined reason.

The only Razorbacks wearing green, no-contact jerseys were backup center Marcus Henderson (pec) and reserve defensive back Jacorrei Turner (shoulder) who are expected to be out another few days, according to Coach Sam Pittman's early camp projection.

Sophomore wide receiver Ketron Jackson Jr. said his knee is feeling better, he's more comfortable in the offense and on the field and he's ready to break out this fall, with thanks to position coach Kenny Guiton.

"I feel like Coach Guiton was a big part in that because I had the raw talent, but he helped with all my techniques and stuff, small details, building every day," Jackson said. "And I stayed consistent with all that and it's showing a little bit."

"Ketron's one of those guys who kind of will speak up," Haselwood said. "Matt [Landers] sometimes. With the Warren situation, you know, Warren, he's gonna do what he do.

"He kind of leads by example. Great, great guy though. He's just quiet. It's just not his personality. He's gonna go out there and do what he's got to do."

A handful of NFL scouts were in attendance. Among those spotted were scouts from the Bills, Chargers, Jets and Vikings.

Sam Pittman said the players are all now wearing helmets with exterior padding with the exception of the quarterbacks, who are off limits from tackling, and special teamers. The helmet cover, which Pittman calls a skullcap, has been worn for several years with the idea of reducing incidents of concussions.

There is a downside to the padding, however, which Pittman partly attributed to a sluggish segment of the opening day of drills.

"I think that takes a little bit of time to get used to as well," he said. "I think it's hotter on your head, so I think that may have had something to do with it. We wore those in spring but it certainly wasn't the same temperature it was today."

Freshman receiver Kalil Girault, a 6-foot, 186-pounder from Haslet Texas, who earned a spot on the camp roster through an open tryout last spring, won reps with the third unit during the fastball starts earlier this week.