Watson Chapel school levy ekes by for a win 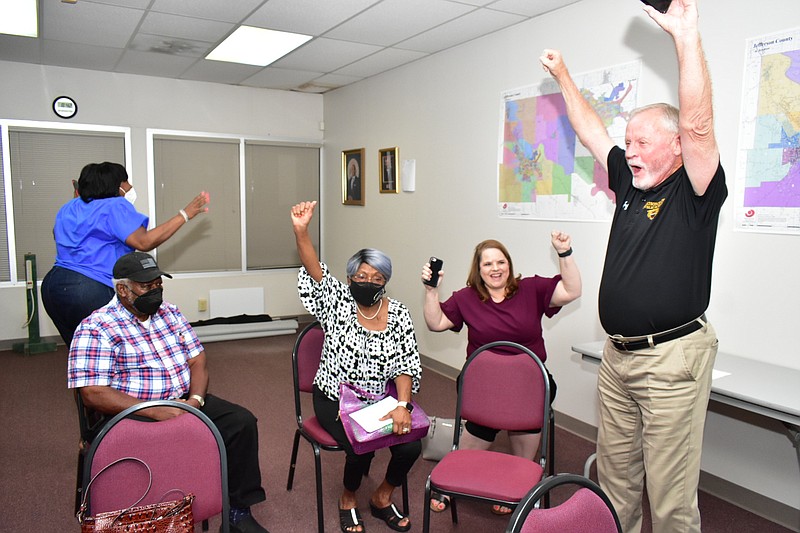 Not even a full month into Tom Wilson's hire as interim superintendent, the Watson Chapel School District scored a big victory at the polls Tuesday, and it brought the longtime educator to tears.

Watson Chapel voters narrowly approved a 5.7-mill increase to help cover the cost of constructing a new high school at the site of the present junior high school, among other upgrades. The millage rate will increase from 34.1 to 39.8 and still remain the lowest among the three school districts in Jefferson County. Unofficial results of Tuesday's special election were:

"I'm so proud for the Watson Chapel community," said Wilson, a Watson Chapel High graduate who came out of retirement after just 13 days from another district and began leading the WCSD on July 18. "I'm proud for Coleman and Watson Chapel because that's what it's about. We've got history together. We've got a great school. We want to continue to improving all of our schools, and building this new high school is so big for our community. I'm just elated right now."

The margin was much tighter with one of the eight polling centers left to report: 202 for, 194 against.

Wilson, along with board members Sandra Boone, Alan Frazier and Goldie Whitaker, let out victory cheers, as did Boone's husband Walter and district treasurer Norma Walker.

"You just don't know," Sandra Boone said. "We are so proud of the patrons of the district because they have the students' best interests at heart. This was what we were working so diligently for."

The request proved successful on its first attempt, which came more than a month after Andrew Curry agreed to resign as superintendent in order to avoid termination. The cause for the separation remains unclear.

"This makes two millages, if I recall," Boone said, referring to a successful 2013 millage increase that resulted in construction of Edgewood Elementary School. "We're doing something right at Watson Chapel. We just need the public to realize that."

School officials say the district will generate $8.6 million from the millage increase, more than enough to cover its portion of a $23 million cost-share agreement with the Arkansas Department of Education to go toward facility upgrades across the district. The state has agreed to foot more than 75% of that bill, of which $18,573,147 will go toward a new high school campus to replace a 77-year-old that presently houses students in grades 7-9. The present high school, built 45 years ago, will become the junior high campus.

WCSD leaders say the upgrades will address ongoing security issues across the district and stem the decline of students in the district. The district has already committed $500,000 toward renovations at Coleman Elementary.

"I think it's going to bring our students, our parents and our patrons back to our district, to see the pride of Watson Chapel go forth, that it is a good school [with] a good education, and we need you," Whitaker said. "And we thank everyone for their vote."

Through early voting, 36 people voted for the increase and 14 voted against. Eight of 10 who voted absentee were against the increase, while the tally of election day votes revealed a 187-182 edge against the request.

Jefferson County Election Commission Chair Michael Adam said there were two provisional ballots, and the commission will meet at 6 tonight to review those. No overseas ballots were filed, he said.

Results are expected to become official on Aug. 18, Adam said.