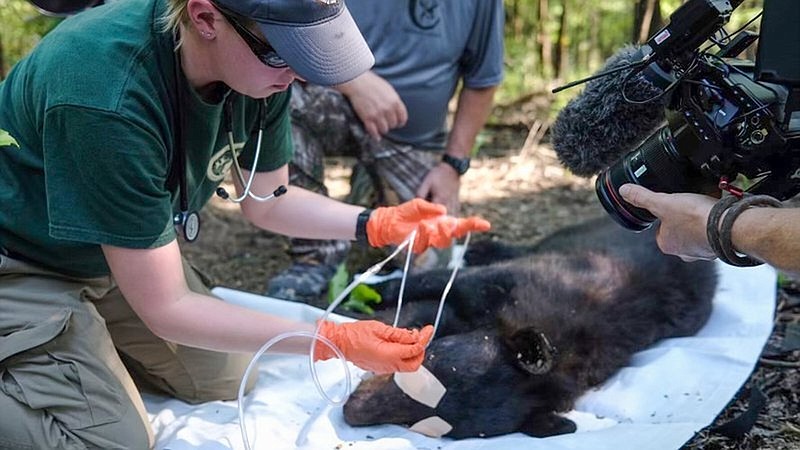 As part of the research that goes into monitoring hunting seasons for bears, Means and many of the commission's field staff are hard at work trying to locate female black bears in Bear Zone 4 to outfit them with GPS satellite collars. The collars will help the commission watch aspects of the season well beyond the data available from harvested bears.

Means said the bears that are collared will be legal to harvest during the season, as it will provide input for the study. In fact, all collared bears throughout the state are now legal to harvest so that more accurate representation of harvest effects can be modeled.

"The added work in collaring bears during summer is just part of the trade-off to make sure we can have a healthy bear population as well as expanded hunting opportunities for Arkansans," Means said.

The project, which was funded by a crowd-sourcing campaign held through Blood Origins with contributions by Howl for Wildlife, the Cabela's Foundation and Facebook Legends Ranch, will gather biological and spatial habitat use data on the population as well as impacts of harvest during the next three to four years.

While bears have been collared in much of the state during the past two decades, and a previous study used radio collars on bears in south Arkansas when Arkansas' bear recovery was in its infancy, this is the first bear project in south Arkansas using modern GPS transmitter-enabled collars.

"We're hoping to outfit 15 female bears with the collars provided through the crowd-sourcing effort by the end of summer," Means said. "So we need as much help as possible finding some females who are active and showing up on a regular basis near their deer camp or property."

To help the commission with this groundbreaking conservation effort, contact Myron Means at myron.means@agfc.ar.gov with information and images of bears.

Randy Zellers is the assistant chief of communications, Arkansas Game and Fish Commission.