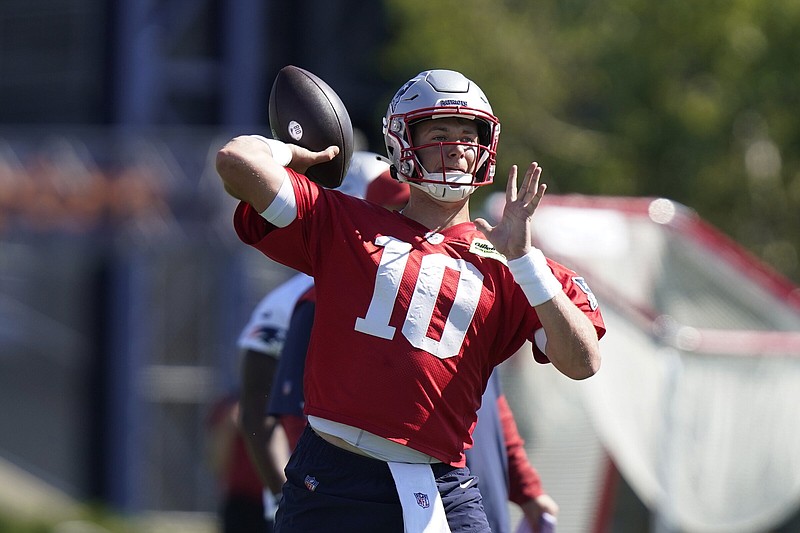 New England quarterback Mac Jones had the most success of any rookie quarterback in the NFL last season, but now he must shoulder more of the offensive load for the Patriots while dealing with the loss of former offensive coordinator Josh McDaniels to the Las Vegas Raiders. (AP/Steven Senne)

SANTA CLARA, Calif. -- The performance didn't come close to matching the hype for the 2021 quarterback class.

With QBs going 1-2-3 for third time ever in the common draft era and five going off the board in the first round for the fourth time, expectations were high for Trevor Lawrence and Co.

But whether it was from lack of opportunity, lack of support or normal rookie struggles, the six rookie quarterbacks who made multiple starts last season were mostly underwhelming with the exception of New England's Mac Jones and Houston's Davis Mills.

Now headed into year two with all six -- Lawrence in Jacksonville, Zach Wilson on the Jets, San Francisco's Trey Lance, Chicago's Justin Fields, Jones and Mills -- projected as starters, the class will have the opportunity to live up to the billing.

"That's the goal: to make a significant jump in year two," Jaguars Coach Doug Pederson said about Lawrence. "I think building off of last year, the fact that he played the entire season, we can build off that and really expect a sky's-the-limit mentality with him."

That's also the goal in New York, Chicago, New England and Houston where their rookies also all started at least 10 games, marking the second time since the merger that five rookie QBs made double-digit starts in the same season.

But the group that did it in 2012 had much more early success than last year's crew with Andrew Luck, Robert Griffin III and Russell Wilson all leading their teams to the postseason as rookies.

Only Jones did that last year, leaving questions about the others on whether they will live up to their pre-draft billings.

Here's a look at the six QBs who started multiple games last season as rookies as they head into year two:

Lawrence entered the NFL as the most heralded QB prospect since Luck in 2012 after being picked first. The results weren't there as a rookie as he played on perhaps the NFL's most dysfunctional franchise with Urban Meyer at coach and an overmatched roster.

Lawrence struggled at times in 2021, finishing with 12 TD passes and 17 interceptions while going 3-14 as a starter. He fumbled nine times, was plagued by drops (33) and hampered by sacks (32), steady pressure and a porous defense that had him playing from behind early and often.

"I had a lot of turnovers last year," Lawrence said. "Finding that balance of being myself and making plays, but also being smart and putting our team in the best situation to win. I think that's important."

Wilson had a rough go of it as a rookie as he struggled to make the adjustment from playing behind a stacked offensive line at BYU to an offense with many holes on the Jets.

Wilson ranked last among qualifying quarterbacks in passer rating (69.7) and completion rate (55.6%), but feels both will improve with increased comfort level.

"When you understand where to go with the ball and you have that confidence and understanding within the offense, you're able to be accurate because you're confident where you're going with the ball," Wilson said.

Lance got by far the least time as a rookie among last year's first-round picks, starting just two games when starter Jimmy Garoppolo was hurt. But the 49ers have no hesitation turning the offense to the unproven Lance, who brings a new element to San Francisco's offense with his running ability and the arm to stretch the field.

Lance also has the most advantageous situation among the second-year QBs with a loaded roster that has almost all the key pieces back from a team that went to the NFC title game last season.

"Last year, I was definitely in a different spot mentally," Lance said. "Just feeling a lot more confident this year, coming in, knowing what I'm doing, knowing the offense a lot better, knowing the guys a lot better. ... I think it'll be a great thing."

Fields went from a loaded college team at Ohio State to an NFL team that was deficient on the offensive line, receiver and scheme in Chicago. The results reflected that as Fields completed only 58.9% of his passes with a 73.2 rating.

But he believes the struggles were a teaching tool and he can build on that this year under a new staff led by Coach Matt Eberflus, who is using a more QB-friendly system.

"I don't love failing, but you just have to be able to know how to bounce back, know how to get back in that mindset and get back rolling," Fields said. "Drop it or whatever, learn from your mistakes, this and that and just keep on going each and every day."

The rookie with the most success last season was the one picked fifth among the first-rounders. It didn't hurt that he stepped into the most stable situation with a solid roster and strong coaching staff led by Bill Belichick and offensive coordinator Josh McDaniels.

McDaniels is gone and Jones is ready to carry a much bigger load offensively then he did a year ago when he memorably earned one of his wins despite throwing only three passes on a windy night in Buffalo.

"He's made tremendous strides," Belichick said. "He did a great job last year but he's starting it from a much much higher point this year than where he started last year. His offseason work has been significant."

Mills was a pleasant surprise as a rookie after being taken in the third round. He took over the starting job in Week 3 and showed some promise in 11 starts on an overmatched Texans team. He had 11 TD passes and just three interceptions over his final six starts, including back-to-back December wins over the Jaguars and Chargers.

"I think I've developed a lot since the end of last season," Mills said. "I think I felt the progression at the end of last year and then really taking it into the offseason, big momentum and stacking on it has allowed me to come out here and start playing really fast at the start of training camp." 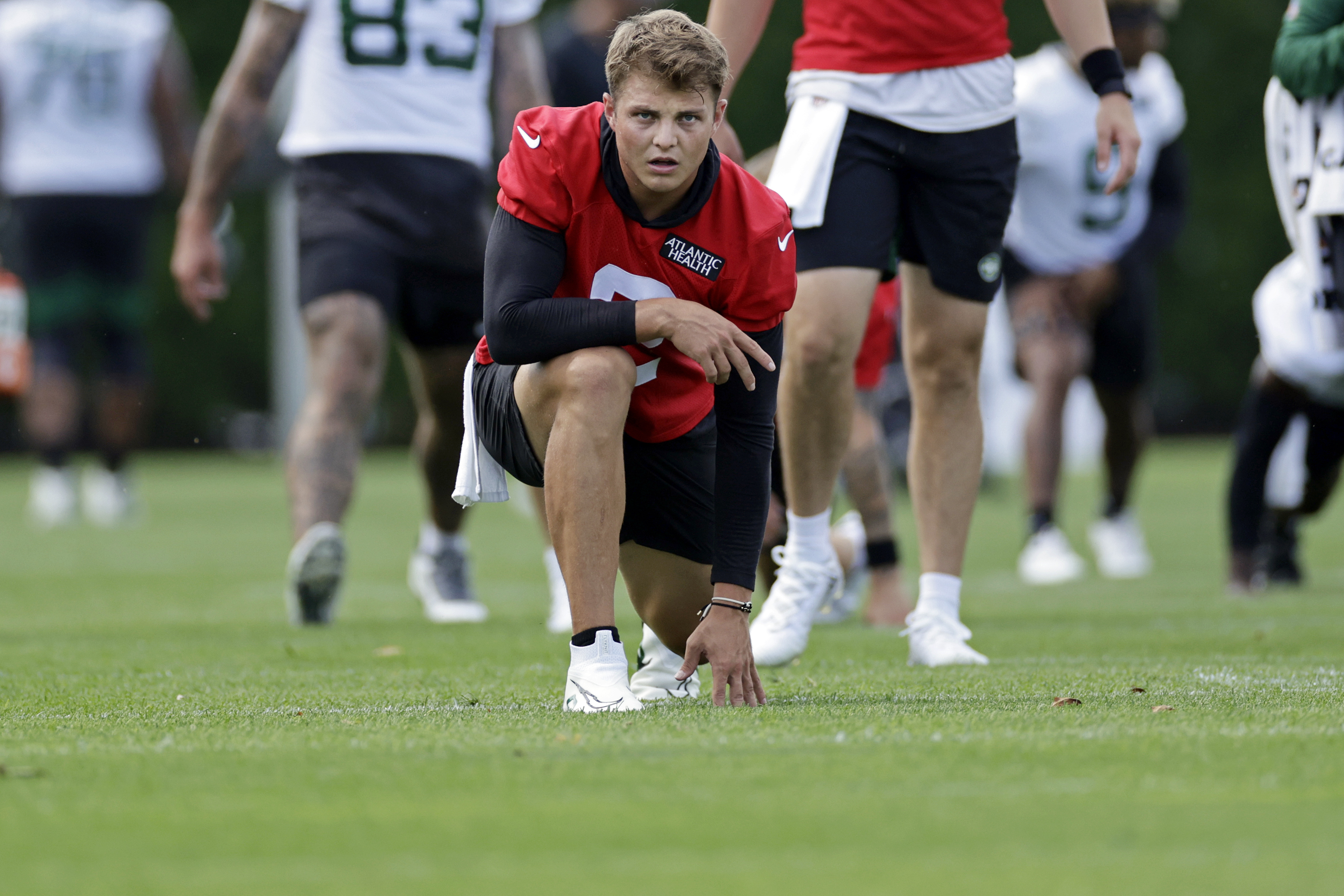 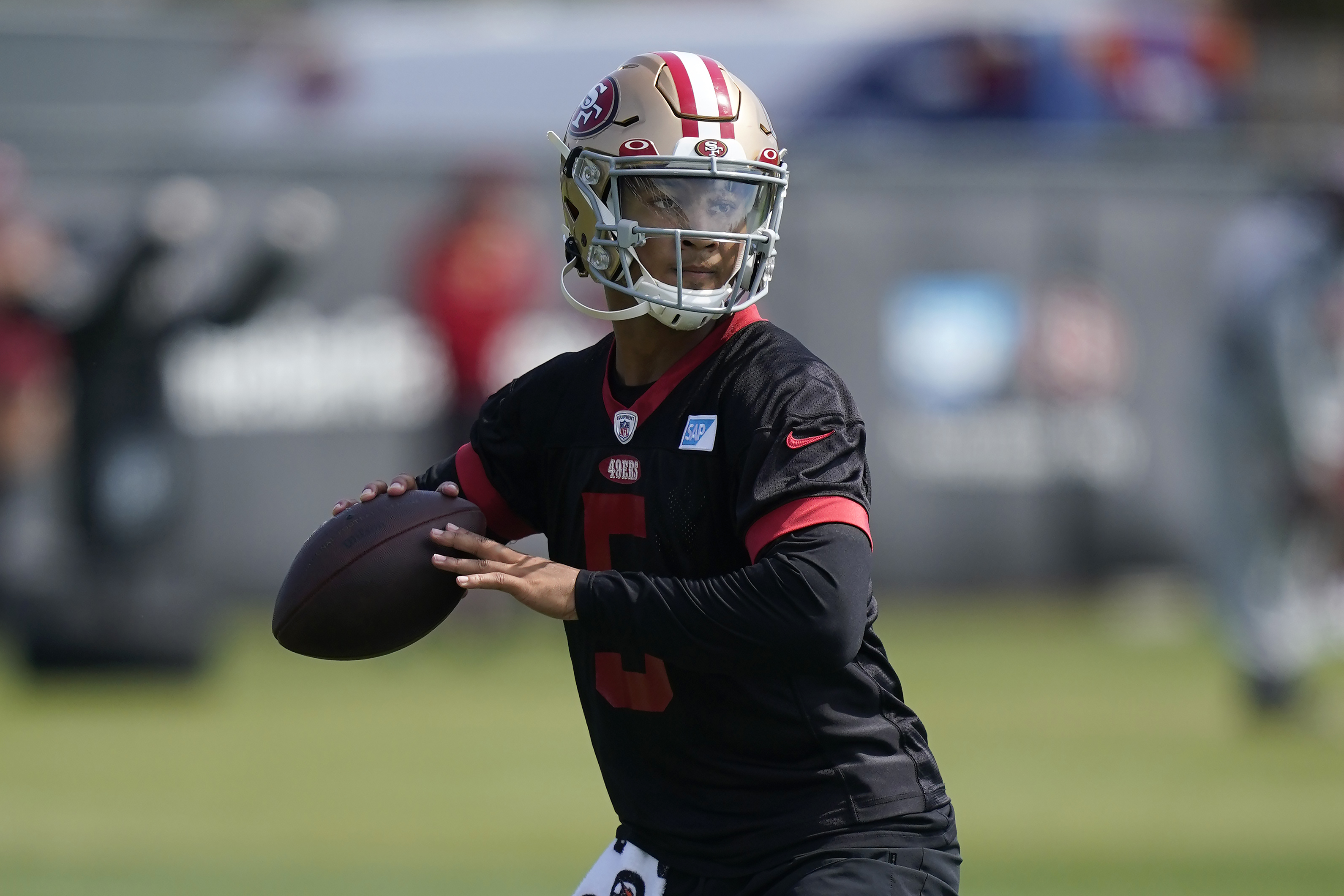 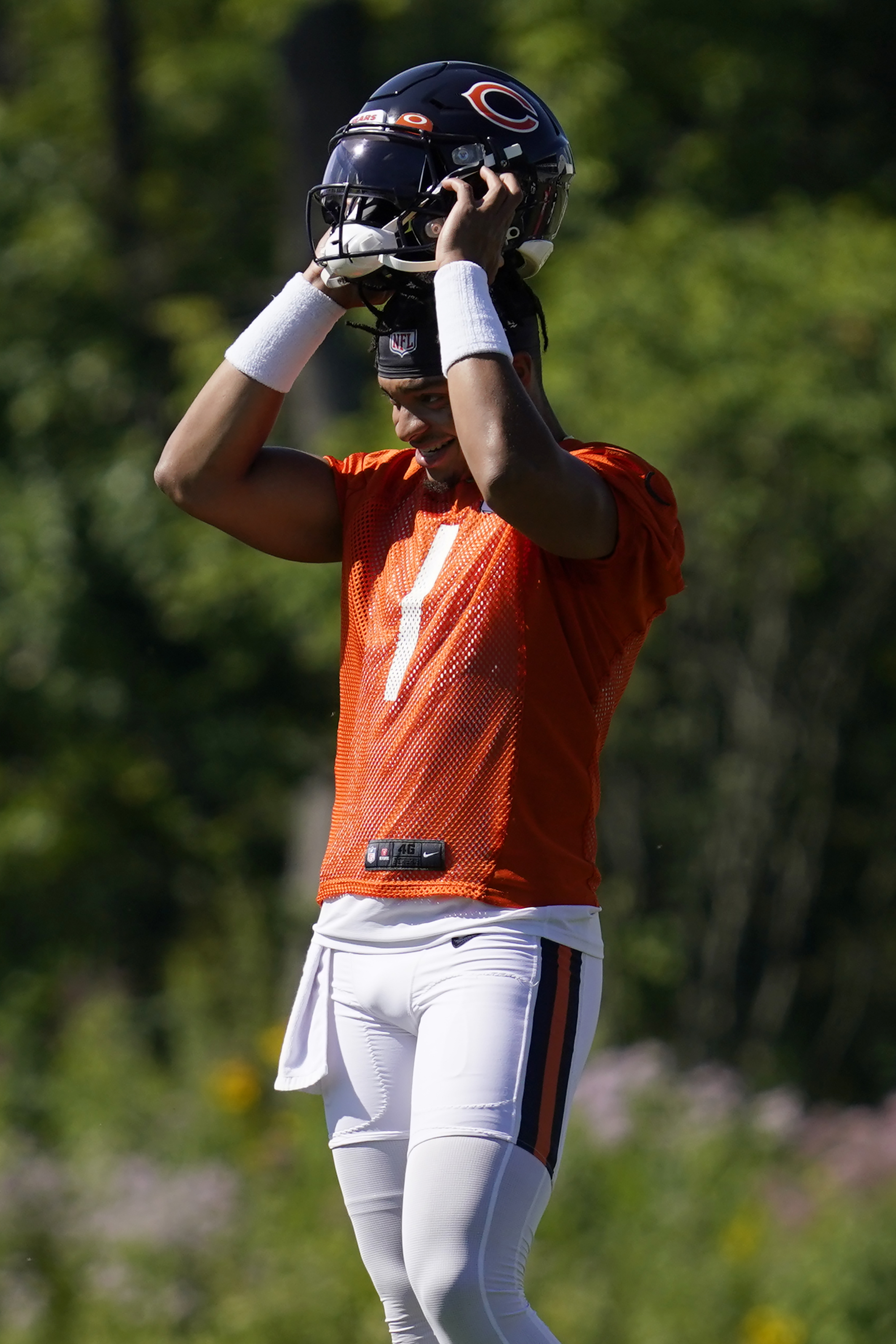 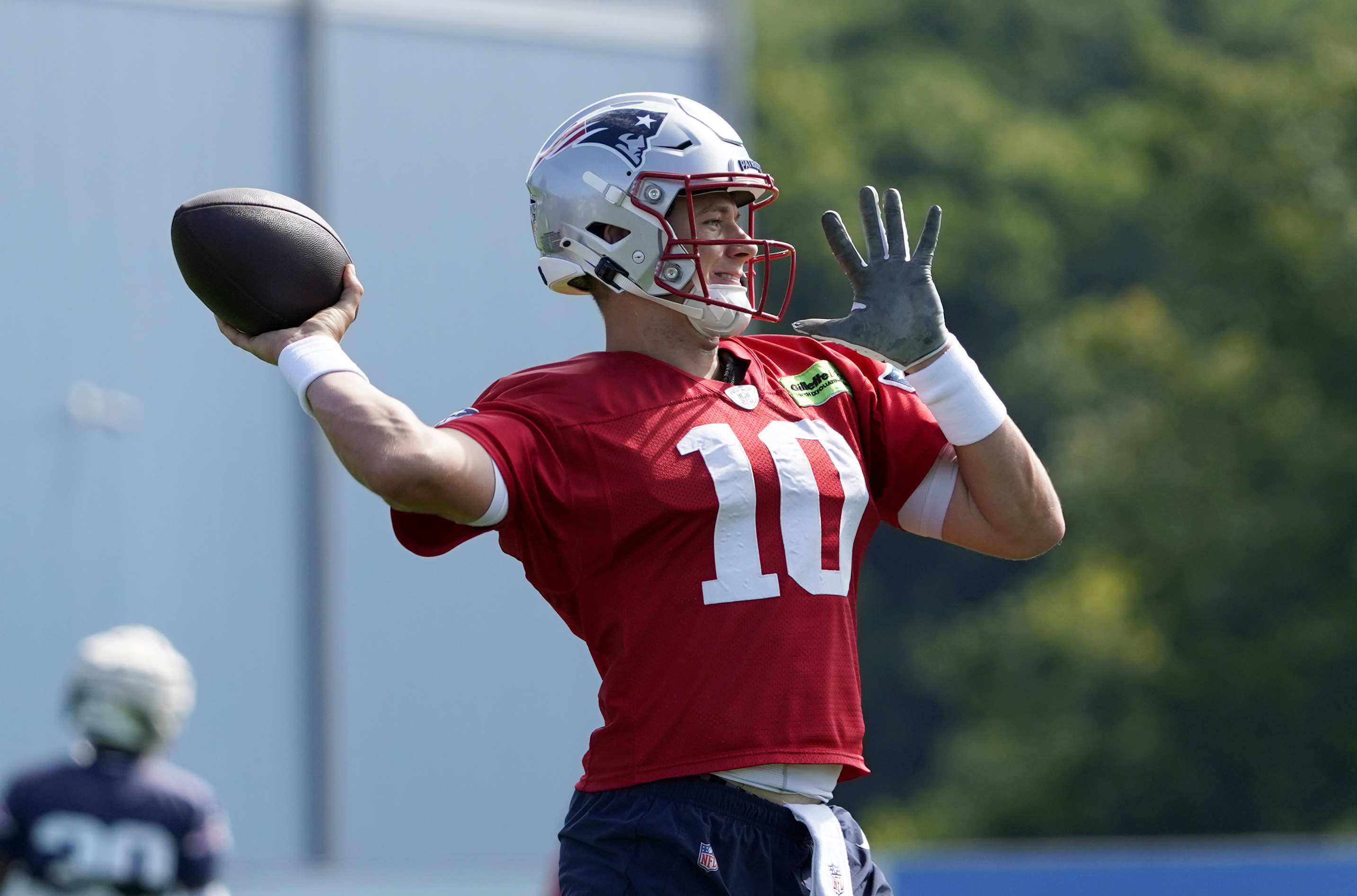 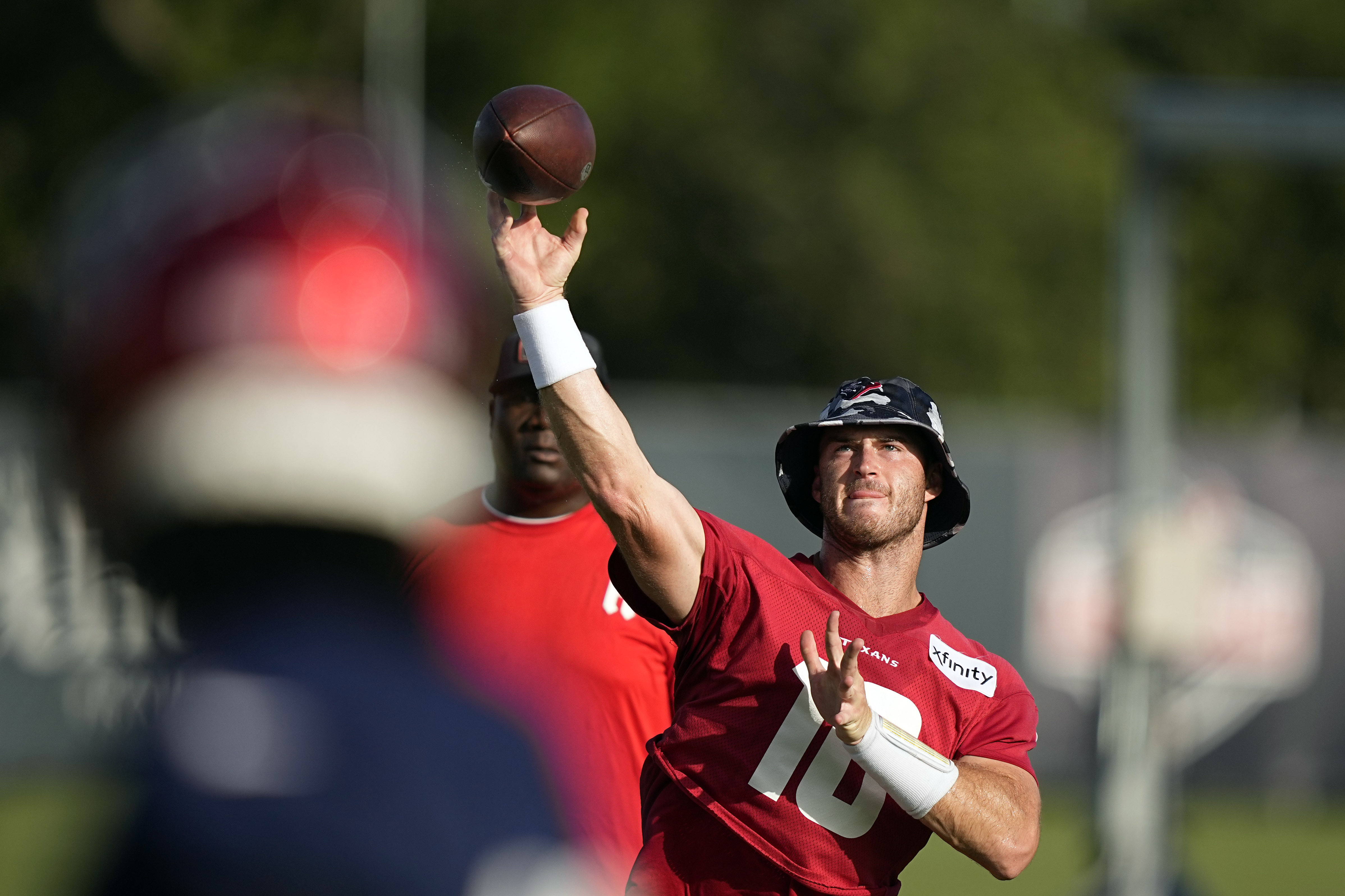