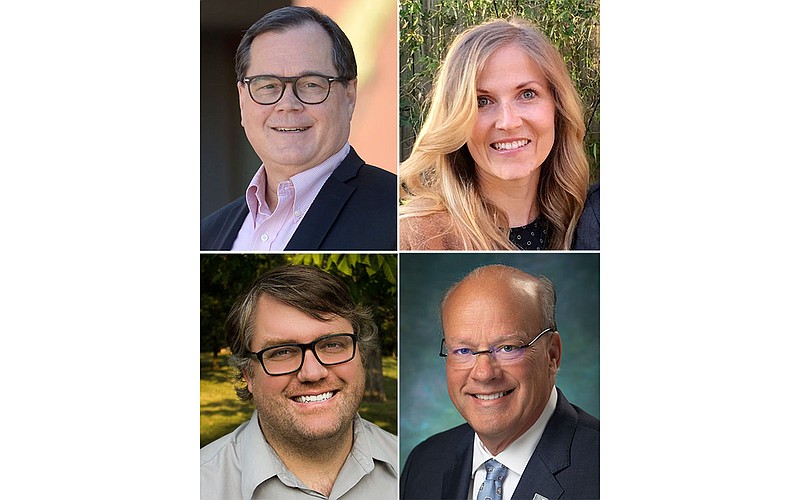 FAYETTEVILLE -- Two of four City Council members will have challengers in November.

The filing period ended at noon Wednesday for nonpartisan municipal and some school board elections.

Mark Kinion, the longest-serving council member, will face a challenge for his Ward 2 seat from community activist Sarah Moore. Kinion has served on the council since 2010.

Sloan Scroggin, Ward 3 council member since 2018, will seek a second term with a challenge from Scott Berna, owner of Nelson-Berna Funeral Home.

Ward 1 council member Sonia Gutierrez Harvey and Ward 4 council member Teresa Turk went unchallenged, each securing another four years in their respective positions. Ward 1 includes the southeast part of town, and Ward 4 is mostly made up of the city's west side.

Kit Williams also went unchallenged and will serve another four years as city attorney, a position he has held since 2001.

Kinion has lived in the city for more than 25 years, is retired and served as sales management executive at GlaxoSmithKline Pharmaceuticals. He also was past president and chief operating officer of Bio-Tech Pharmacal and was a mortgage loan officer at Bank of Arkansas.

Moore described herself as a mom and community advocate who has lived in the city since 1998. She serves as executive director of the Arkansas Justice Reform Coalition, a nonprofit that seeks to build community healing and end systems that cause harm.

Berna and his wife, Paula, have lived in Fayetteville since 1999. He grew up in Van Buren and has served as director or manager of several funeral homes in cities such as Fort Smith; Longview, Texas; and Oklahoma City. His son, Colby, and daughter, Calli, were athletes at Fayetteville High School.

Scroggin is a general contractor who does home repairs. He has lived in the city for 14 years with his wife, 9-year-old daughter and 6-year-old son. He also teaches mathematics at the University of Arkansas, Fayetteville and is a licensed Realtor who owns rental properties. He formerly served on the city's Planning Commission.

The candidates for Ward 2 and 3 will face one another during the general election Nov. 8. Early voting begins Oct. 24. Only residents who live in the ward can vote in those respective elections. Candidates must live in the ward they seek to represent.