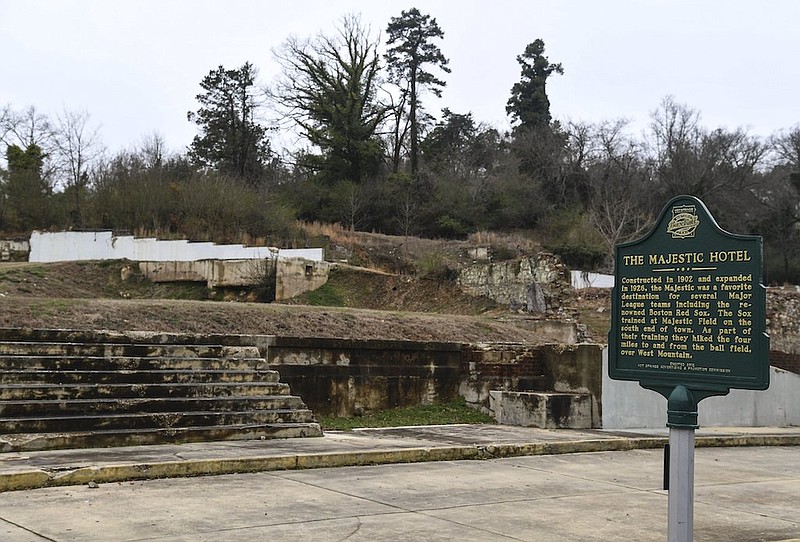 The former Majestic Hotel site as seen from Park Avenue. - File photo by The Sentinel-Record

Little has changed at the Majestic Hotel site since excavators scraped it bare in 2016, despite the Hot Springs Board of Directors making the redevelopment of the historic Park Avenue property one of its top priorities for 2021 and 2022.

Responses to two requests for proposals the city issued in 2020 were few. R.A. Wilson Enterprises had the property under contract for almost a year before terminating the agreement last month. It had proposed building an outdoor entertainment venue operated by the Walton Arts Center.

The city has yet to recoup the more than $2 million in solid waste funds it used to acquire the site in 2015, demolish its condemned buildings in 2016 and remediate environmental liabilities in 2018.

City Manager Bill Burrough told the board last week that city staff will be focused on other priorities in 2023. Moving the wastewater system closer to compliance with the Clean Water Act, securing additional funding to complete the Lake Ouachita water supply project, advancing the city's solar project, enforcing short-term rental regulations and updating the zoning code are on the to-do list.

Issuing a third request for proposals or entering into another real estate contract may have to wait, he said.

"If we start talking about we're going to go through a whole lot of other meetings, I don't think we can handle that," Burrough told the board at its annual goals and priorities workshop. "We are tapped."

He said the Hot Springs Metro Partnership has offered to help market the site. The city contracts the public-private nonprofit for economic development services.

"Maybe they can cast a wider net," Burrough told the board.

"The HSMP and chamber boards have expressed a desire to assist the city in the marketing of the Majestic site," he said in an email. "We would respectfully wait until the city agreed to accept that proposed help to develop and announce a plan."

Enhancing economic opportunities, improving quality of life and enhancing the visitor experience, celebrating the natural wonder of Hot Springs National Parks' thermal waters and respecting the arts, culture and history of the city are guiding principles the 2017-18 board established for the site's redevelopment. Mayor Pat McCabe suggested they be updated before the end of the year.

"I think we need to revisit what we had as priorities," he said. "We've got one chance to do it right, and if we're going to have others get involved we need to set some goals or go out and seek some advice from others on what's the highest and best use of it. That has been studied so much, and the community has never rallied around one use."

The National Park Service said supply lines that connected the Majestic site to the park's thermal water distribution system were removed after the February 2014 fire at the "yellow brick" building. After learning last year that no process is in place to apply for access to the city's namesake thermal springs, the board removed the thermal water piece from its guiding values and added recouping the solid waste fund's more than $2 million investment.

"I tend to agree with the mayor," Burrough told the board. "If the board is going to entertain the Metro Partnership marketing the site, I think you have to revisit the priorities. Anybody who does this needs some sideboards to know what they're doing."

McCabe told the board it may need to consider subdividing the site's four parcels.

"We looked at it as one development," he said. "Maybe that's not the way to look at it anymore. I've had people tell me why don't we just have four or five buildable pads with different uses."

District 1 Director Erin Holliday said she preferred soliciting proposals over entering into another real estate contract. She was the lone director to oppose putting the property under contract last summer.

"Scrambling and trying to get it done is how we ended up in a real estate discussion, not that that was necessarily the wrong discussion, but was it the most right?" Holliday, whose distinct includes the Majestic site, asked the board. "I'd rather not force anything on that at this point."

She asked the board to put off considering subsequent offers for the site.

"I don't want to go through what we just went through with R.A. Wilson," Holliday said. "Somebody can put something on paper, and then all of a sudden we're spending months just having conversations about something that we may not even remotely be interested in doing, but we have to do our due diligence."

Burrough said he'll bring any offers to the board.

"We know there's people out there who are interested in the site," he said.

The appraisal the city commissioned last year assigned a $2.25 million value to the property, about $80,000 more than R.A. Wilson's offer. The Garland County assessor's office increased its appraisal by 28%, raising the value to $1.71 million during the countywide reappraisal that concluded earlier this year.