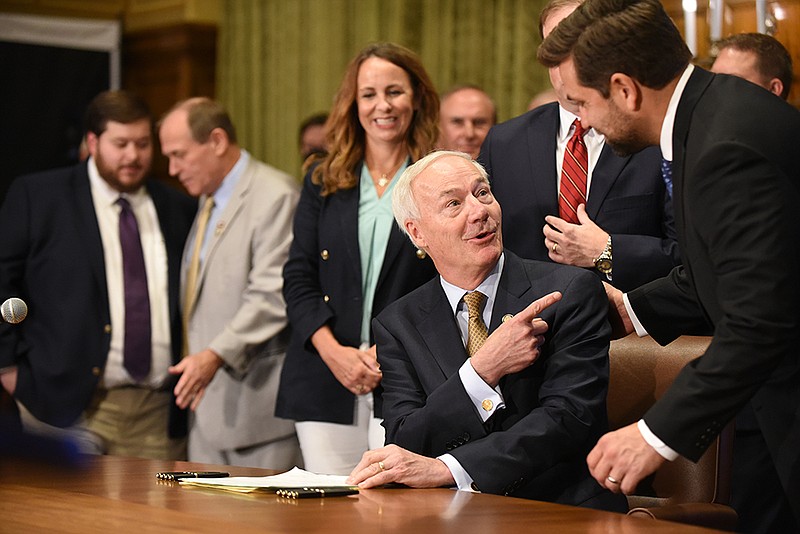 Surrounded by Republican lawmakers, the Republican governor signed House Bill 1002 by Rep. Joe Jett, R-Success, and Senate Bill 1 by Sen. Jonathan Dismang, R-Searcy, into law after the Senate and House approved the respective bills on the third and final day of the special session. HB1002 is now Act 1 and SB1 is now Act 2, Hutchinson spokesman Shealyn Sowers said afterward.

"This tax relief package that has just been enacted takes over $400 million from the state coffers and puts it in individual Arkansans' pockets," Hutchinson said at a news conference in the governor's conference room in the state Capitol. "That is a transfer of wealth from the government to the taxpayer, and it could not come at a more important time."

The finance department projected a general revenue surplus of $914 million in fiscal 2023.

The enactment of the tax cut measure will leave the state with a projected general revenue surplus of roughly $400 million in fiscal 2023, Jett told the House Revenue and Taxation Committee on Tuesday. The state's general revenue budget that supports programs such as the public schools, human service programs, colleges and universities and correctional programs is $6.02 billion in fiscal 2023.

Hutchinson said the state has cut individual income taxes over the past eight years, and increased state reserve funds from zero dollars to more than $2 billion, and "we accomplished this through a smarter and leaner and more efficient state government that has increased funding at the same time for education, public safety and health care."

"We are charting a course for the taxpayers of all income levels to have more money in their pockets to save, spend or invest," he said.

Hutchinson said the state's top individual income tax rate was 7% when he was elected governor in 2014 and the top rate is now 4.9% under Acts 1 and 2.

Dismang said the tax cut bill "doesn't get us where we need to be, but it gets us a step closer."

On Thursday, the House voted 79-14 to send SB1 to the governor as four House Democrats joined 75 House Republicans in voting for the bill, while 14 House Democrats voted against it.

On Thursday, the Senate voted 27-5 to send HB1002 to the governor as a Senate Democrat and a Senate independent joined 25 Senate Republicans in voting for the bill. Five Senate Democrats voted against it.

The Senate voted 24-8 to adjourn the special session and the House voted 61-33 to adjourn before any Democrat in either chamber could make motions to seek a two-thirds vote to extend the special session to consider other matters such as measures to increase teacher pay, to change state law that allows abortions only to save the life of the mother in a medical emergency in order to allow abortions in case of rape, incest or terminal fetal abnormality, and an alternative to the Republican tax cut measures.

Hutchinson last Friday issued a call for the special session, which started Tuesday and adjourned Thursday, to consider tax cuts and providing $50 million in state funding to a restricted reserve account for a school safety program.

"I have not seen a more efficient and orderly and effective special session than we've had," said Hutchinson, who is serving his eighth and final year as governor.

Hutchinson said Thursday that he didn't have the votes to get a teacher pay raise bill through the House and Senate education committees in the special session.

"It makes a lot of sense that you have the adequacy review and ... I have confidence it will be addressed next January," he said. He noted that the Legislative Council last month recommended school districts use certain federal American Rescue Plan funds to provide recruitment and retention bonuses to teachers and classified staff.

But Rep. David Tollet, R-Lexa, who voted against adjourning the House, told colleagues that they didn't need to wait for the House and Senate education committees to complete their educational adequacy report this fall to know teachers in Arkansas are underpaid.

"You don't have to look at an adequacy report to see that the other states' starting salaries are higher than Arkansas," Tollett said. "Whether we do it now or we wait, I hope that this body will make the commitment to not just give teachers raises, but to put teacher salaries at a competitive level with the states that are around us."

"We passed funds for our schools, to fortify their doors, secure their campuses and more, but we've chosen not to fund our educators and staff who work inside those very buildings," said House Democratic leader Tippi McCullough of Litttle Rock.

Senate President Pro Tempore Jimmy Hickey, R-Texarkana, said in an interview that "nobody knows anything for sure, but it's going to be one of those times that I am just almost sure that there is going to be significant teacher raises within this next session after we go through our [educational adequacy] process" based on the specific needs in the state.

More than 1.6 million taxpayers who pay income tax would receive an income tax reduction under HB1002 and SB1, according to the state Department of Finance and Administration.

In the Dec. 7-9 special session, the Legislature and Hutchinson enacted several tax cuts that the finance department projected would reduce state general revenue by $132.25 million in fiscal 2022 that ended June 30 and the amount would gradually increase to nearly $497 million in fiscal 2026.

Under Acts 1 and 2, the tax cut package includes:

• Accelerating the implementation of cutting the state's top individual income tax rate from 5.5% to 4.9%, retroactive to Jan. 1, 2022.

The federal Section 179 depreciation schedule allows businesses to deduct the entire purchase price of new or used equipment up to $1.08 million in 2022 rather than capitalizing and depreciating the asset over the designated useful life of the asset, according to finance department spokesman Scott Hardin. The $1.08 million deduction is reduced dollar for dollar if asset purchases exceed $2.7 million for 2022, he said.

Arkansas previously adopted Section 179 as it existed Jan. 1, 2009, and the dollar limitation on the deduction is $25,000 and the dollar-for-dollar phase-out starts at $200,000, according to Hardin. The federal limitation is adjusted for inflation each year.

Act 3 will allow the transfer of $50 million from the general revenue allotment reserve fund to a restricted reserve fund for a school safety grant program.

States historically are more likely to reduce tax burdens when times are better and, with most state budgets in a strong stable position, "this tendency has played out once again" and "relief has undoubtedly been the the most prominent tax trend in 2022," the National Conference of State Legislatures said in a recent fiscal brief.

At least 10 other states have enacted income tax cuts in 2022, and three of the states (Georgia, Iowa and Mississippi) are moving from graduated income tax rate structures to a flat tax rate. At least several states have reduced or eliminated sales taxes applied to groceries, the conference said.

At least eight states have enacted a new one-time income tax rebate program this year and at least 10 states have approved legislation to provide beneficial tax treatment for Social Security benefits or retirement income, according to the National Conference of State Legislatures.

"Despite the current rosy revenue picture for states, financial concerns are on the horizon," the National Conference of State Legislatures said.

Most states are forecasting weaker tax revenue growth in 2023 and, given inflation rates and public sector job vacancies, states will likely face growing spending and wage pressures, and state tax relief efforts "will probably slow as these issues linger or build momentum," the conference said. 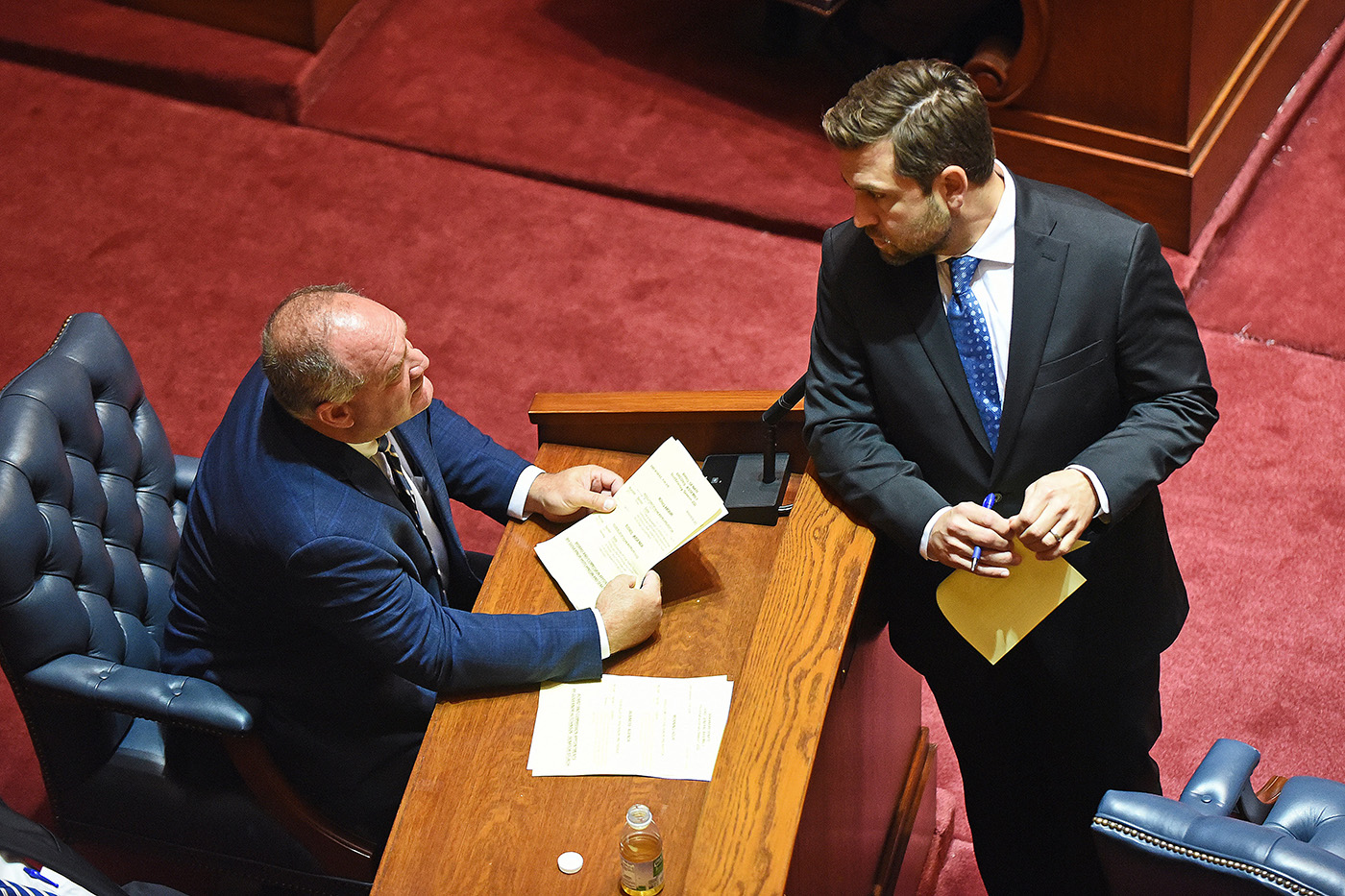 Senate President Pro Tempore Jimmy Hickey confers Thursday with Sen. Jonathan Dismang. Hickey said he is “just almost sure” that significant raises for teachers would be coming in the next regular legislative session. (Arkansas Democrat-Gazette/Staci Vandagriff)