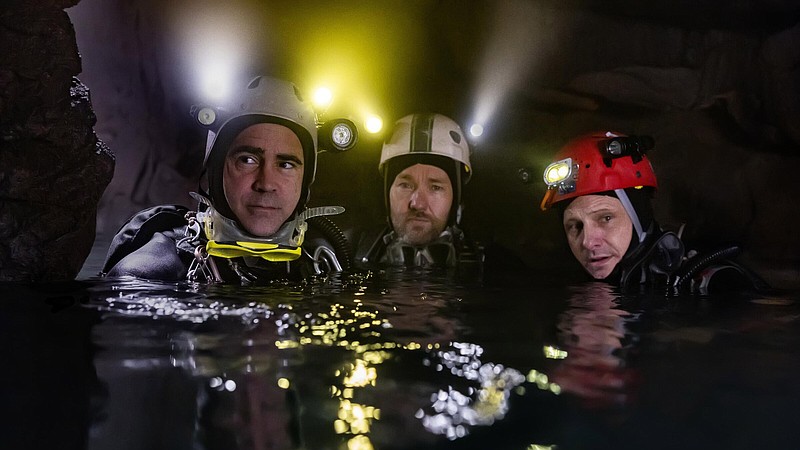 It may sound counterintuitive, but one of the greatest delights of being a critic is being proved wrong.

Last year, in my review of "The Rescue," Oscar-winners Jimmy Chin and Elizabeth Chai Vasarhelyi's breathtaking documentary about the 2018 cave rescue of a boys' soccer team and their coach in rural Thailand, I suggested aspiring filmmakers should find another story to tell. I didn't think we needed another version of the story. (Which has also been the subject of a Thai action drama "The Cave" and the documentary "Cave Rescue.")

Ron Howard probably never read that. If he did, I'm glad he ignored unsolicited advice. Along with screenwriter William Nicholson's "Thirteen Lives," Howard and crew achieve a nearly ideal balance between exposition and story with this film. They seem to have a radar for how to make esoteric information accessible. As with "Apollo 13," the technical information is never dumbed down.

After 12 members of a boys' soccer team and their coach (James Teeradon Supapunpinyo) were stranded in a network of flooded underground caves called Tham Luang, some 5,000 rescuers from all over the world volunteered to try to help. But there were two ticking time bombs. First, the team is trapped because of unseasonal flooding with monsoon season but a few weeks away. During that time the caves will be full for eight solid months.

And the cave where the boys are trapped is running out of oxygen.

The regional Governor Narongsak (Sahajak Boonthanakit) is weeks away from being shuffled to another assignment but appears to be stuck as a sort of fall guy in case the boys die. Nicholson unsparingly depicts how bureaucratic turf wars could have derailed the process from the beginning, but he and Boonthanakit depict the beleaguered official in a consistently humane manner. He unknowingly makes promises that might be impossible to keep, but he also willingly takes the heat as things get more difficult.

The Thai Navy SEALs are as brave and specialized as their American counterparts, but the number of people on the planet who can rescue people in flooded caverns can be counted on the fingers of one hand.

Divers like Brits Rick Stanton (Viggo Mortensen) and John Volanthen (Colin Farrell) use custom equipment and know how to reach places the SEALs, who are trained for open lakes or the ocean, can't.

As the two get past their differences and discover that the boys and their coach have survived the flooding, a host of new challenges emerges. Getting through the poorly lit (actually, nature didn't provide any lighting) watery tunnels takes Stanton, Volanthen and the SEALs hours. Getting the boys -- some of whom can't swim -- through is another matter.

Stanton is consistently skeptical about their chances while Voanthen gives him grief for excessive cynicism. To Nicholson's credit, we discover they're both right. The tactless Stanton is keenly aware of everything that can go wrong, and Volanthen forces both of them to push their expertise to the limit so the boys might live.

Nicholson, who's probably best known for the play and movie "Shadowlands," writes lean and focused dialogue, and characters who are only on the screen for a few minutes leave vivid impressions. Joel Edgerton is terrific as a moonlighting Australian anesthesiologist who has the unenviable task of making the mission work by practically inventing a way to get the boys through the caves alive. His Dr. Harry Harris doesn't show up until near the end of the second act, but Harris' struggles help anchor the later portions of the film.

On a technical level, "Thirteen Lives" captures the danger and the beauty of the caves and the mountain that houses them. As with Howard's previous movie "Rush," the special effects don't look like special effects and complement the naturalism of the performances.

It would be impossible to make a 2½-hour movie that accurately documents how legions of people from 17 nations, including the United States, helped get the boys out. Nonetheless, the film also celebrates how the residents of northern Thailand found several ingenious ways to keep the caves from flooding further and recounts some potential political scandals that viewers following newscasts wouldn't have known about at the time.

Like the people he's documenting, Howard has gone ahead when odds seemed to defy him. That may explain why he can retell a story that's familiar, but never tired.

Rating: PG-13, for some strong language and unsettling images.