The world in brief: Montenegro gunman kills 11 on street 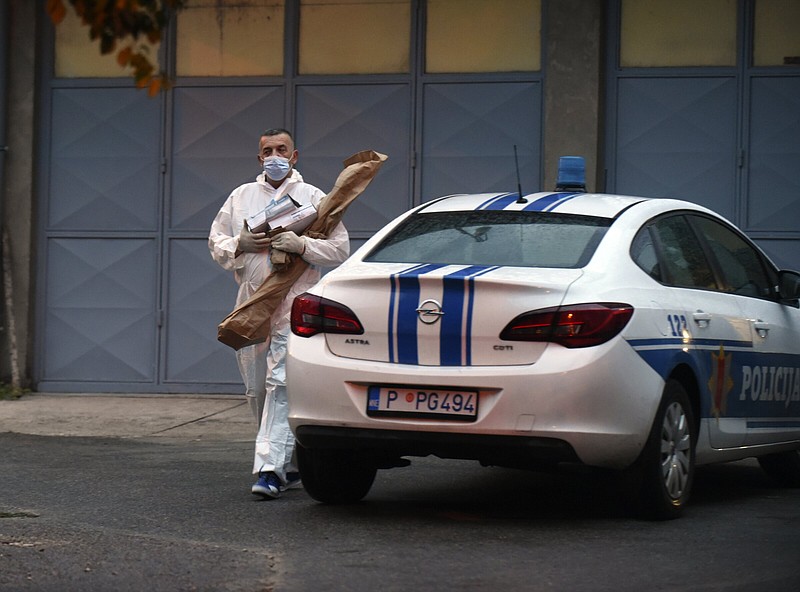 A police investigator holds evidence material Friday on the site of the attack in Cetinje, some 19 miles west of Podgorica, Montenegro. (AP/Risto Bozovic)

CETINJE, Montenegro -- A man in Montenegro went on a shooting rampage Friday, killing 11 people on the streets of a city before being shot dead, Montenegro state TV reported, quoting police sources.

State TV RTCG said the 34-year-old gunman wounded another six people, including a policeman, in the city of Cetinje's Medovina neighborhood, which is near the seat of the former royal government. The city is 22 miles west of Podgorica, the current capital of the small Balkan nation.

RTCG, quoting witnesses, said the attacker was randomly shooting at people walking in the street, including at children. Four of the wounded were transferred to a hospital in Cetinje while two others with serious wounds were sent to the Clinical Center in Podgorica, it said.

RTCG quoted police sources as saying that the attack came after a family dispute, but gave no further details. Police still have not issued an official statement about the attack but have blocked off the site.

The federal government's security undersecretary, Ricardo Mejia Berdeja, said the violence started inside the state prison after 1 p.m. Thursday, when members of the Mexicles gang attacked members of the rival Chapos. In addition to the two deaths, 20 inmates were injured. Then suspected gang members outside the prison began burning businesses and shooting up Ciudad Juarez.

Mejia said four employees of MegaRadio who were broadcasting a live promotional event outside a business were killed in the shooting.

Chihuahua state Attorney General Roberto Fierro Duarte said that a boy wounded in a shooting at a convenience store died later at the hospital, two women were killed in a fire at another gas station convenience store and two other men were shot elsewhere in the city.

Fierro said 10 suspects had been arrested.

Since the start of the rainy season in May, the U.N. Office for the Coordination of Humanitarian Affairs says that an estimated 38,000 people have been affected by the floods across the East African country. The total nationwide death toll remains undetermined. On Wednesday, SUNA reported that two children were killed when floods destroyed their home in the central province of the White Nile.

Sudan's rainy season usually lasts until September, with floods peaking between August and September. In 2021, more than 314,000 people were affected by rains and flooding across Sudan, according to the U.N.

Hunt on for missing migrants off Greece

ATHENS, Greece -- A search and rescue operation was conducted for a third day on Friday for migrants reported missing after their boat capsized south of the Greek island of Rhodes, the coast guard said Friday.

A total of 29 survivors, all men, were picked up by a merchant ship and a Greek air force helicopter in the early hours of Wednesday after the boat sank. Survivors had initially indicated that between 60 and 80 people had been on board, but that figure was later revised, and the coast guard said Friday that a total of 50-60 people were now believed to have been on board.

Two of the 29, who the coast guard said were Turkish nationals, were rescued by helicopter and flown to Karpathos, while the other 27, all nationals of Afghanistan, Iran and Iraq, were picked up by the merchant ship and transported to Kos.

The Turkish coast guard had also said on Wednesday that it had rescued five people.

It wasn't immediately clear why the boat sank, but weather conditions in the area were rough at the time, with strong winds and choppy seas, Greek authorities said.

The most common sea route for asylum-seekers from the Middle East, Asia and Africa has been from Turkey to the nearby Greek islands in the Aegean Sea.

But with Greek authorities increasing patrols in the area and facing persistent reports of summarily deporting new arrivals to Turkey without allowing them to apply for asylum, many are now attempting the much longer, and more dangerous, route directly to Italy. Greek authorities deny they carry out illegal summary deportations of asylum-seekers.