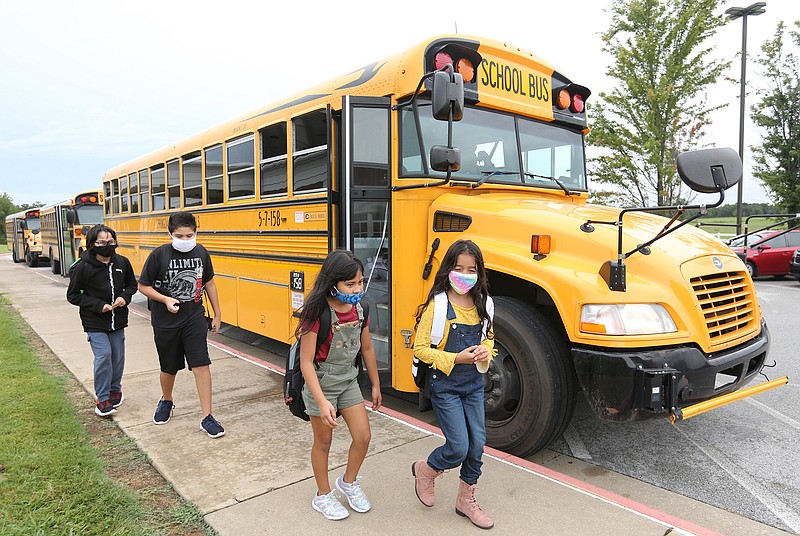 SPRINGDALE -- Students may have a little farther to go to the bus stop when they return to school Monday, but consolidated routes should help make sure kids have reliable transportation to school, according to school administrators.

However, several parents voiced concerns about the new routes at Tuesday's School Board meeting, saying the bus will stop four to five miles from their rural homes, creating a dangerous situation for children.

In the past, some routes stopped at individual student residences, but buses will now pick up all students at fixed locations, according to a news release. The revised routes are designed to prevent canceled routes.

Most bus stops will be within walking distance of students' homes, though some rural stops present a challenge and the district is looking for optimal solutions in those areas, Jones said.

"Canceled routes have stressful ripple effects that impact families and the community," he said. "The updated routes will go a long way toward preventing cancellations in the future and will help families better plan their daily routines."

In the last five years, the district has cut 42 regular bus routes, from 100 routes in 2017-2018 to 58 routes this year, according to transportation director Kevin Conkin.

The problem is not a shortage of buses, but a shortage of drivers, Conkin said. About 45% of drivers are over the age of 65 and 75% are medically at risk for covid-19, according to the federal Centers for Disease Control and Prevention guidelines, he said. Combined with a low overall employment rate, the situation made it very difficult to find bus drivers, he said.

Tricia Zimmerman, a parent, said she lives in a rural area and the new bus stop will be four miles from her home. In addition to the distance, it would be dangerous for her children to walk to the bus stop because they live on winding back roads with no sidewalks.

"What if one gets hit by a car? What if one is attacked by a dog?" she said.

Zimmerman said nine children who live near her home are affected by the changes. She proposed the bus stop a quarter mile from her house to pick them all up. Cutting the bus route saves 18 minutes, but that time is worth a child's life, she said.

"We are all working parents, we can't come and be at the bus stop," she said.

Brandon Cochran, another parent, said he lives near Zimmerman and his house is five miles from the new bus stop.

"We want people to realize people who ride this bus are in kindergarten through seventh grade," he said. "We are not talking about high school kids."

Cochran said he is worried his children will be stranded at the bus stop five miles from home if the bus is canceled this year, like it often was last year. There are no sidewalks, crosswalks or shelters at the new stop, he said.

"We cannot let a lack of hiring drivers override the safety of our children," he said.

On Friday, Jones said Conkin has communicated with the families and reviewed the routes in question. One route has been modified on Wagon Wheel Road and other routes are still under review, Jones said.

Conkin encouraged community members to apply to be bus drivers. Coaches and teachers have also stepped up to get driver training and help out with the shortage, he said.

Springdale is the largest school district in the state with about 22,000 students as of last fall. The Transportation Department oversees 135 school buses, which travel approximately 2.8 million miles per year. District buses transport some 15,000 students to and from school daily.

Families can find their child’s bus route by visiting www.sdale.org/page/transportation or calling 479-750-8830.