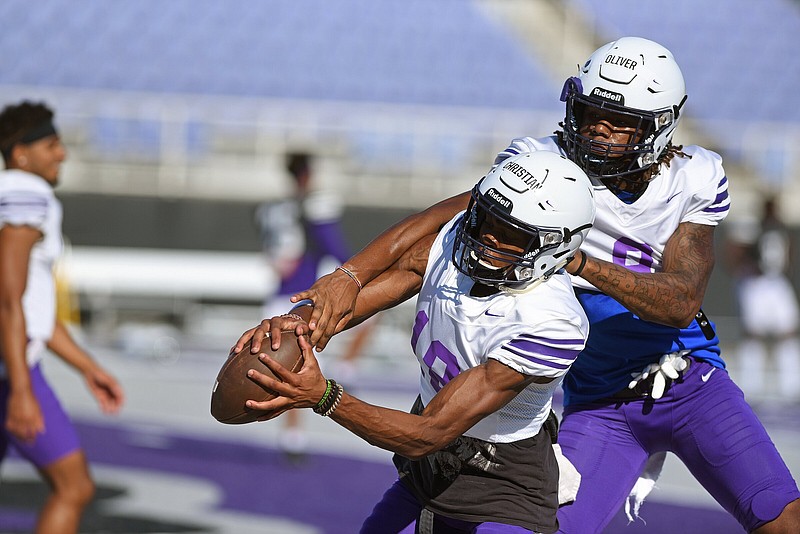 Central Arkansas wide receiver Charles Christian (left) makes a catch as wide receiver Trustin Oliver tries to intercept during a warm-up for Saturday’s scrimmage at the University of Central Arkansas’ Estes Stadium in Conway. Oliver, a 6-4, 215-pound safety-turnedwide receiver, transferred from Colorado and has Coach Nathan Brown “excited about him.” (Arkansas Democrat-Gazette/Staci Vandagriff)

CONWAY -- Will McElvain is going to have plenty of options come Sept. 1.

The Northern Iowa transfer has solidified himself as the University of Central Arkansas starting quarterback for Week 1. And while the same can't be said as to who he will be throwing to quite yet, one thing was clear from the Bears' scrimmage Saturday morning at Estes Stadium -- there is no shortage of options to fill the role.

The Bears are entering 2022 without their top two receivers from last season, and are searching for their replacements. There's no determination as to who will fill those roles, but what was clear from Saturday is that there is a frontrunner in Trustin Oliver.

The 6-4, 215-pound safety-turned-wide receiver transferred from Colorado after featuring in two games for the Buffaloes. He has three years of eligibility remaining. Now with UCA, he's cemented himself as the go-to outside option for Coach Nathan Brown.

"Trustin Oliver as a transfer that came in in the spring and really was just kind of figuring out his role and trying to learn the offense, and he's had a huge two weeks. I'm excited about him," Brown said.

There were three notable absentees on offense for the Bears. Receivers Jarrod Barnes and Christian Richmond, as well as running back Kylin James, suited out for Saturday's practice but were limited and did not participate in the scrimmage. Richmond's involvement was limited to two simulated kickoffs, returning one himself, while the other two did not feature.

In Richmond's place, University of Arkansas transfer John David White scored a touchdown. He's quickly become a mainstay at the inside receiver spot for UCA.

"I mean, he's just so efficient when he's in the ball game," Brown said. "He's gonna catch a lot of balls for us this year."

With James sidelined as a precaution, UCA turned to freshman Isaiah Broadway. The 6-0, 195-pound freshman from Lancaster, Texas, has impressed coaches and teammates with his smooth running style and pass-catching ability. Broadway began the scrimmage with the third string but received snaps with all three units.

"He's a very dynamic player," Brown said. "He's a great running back, but he's got really, really good ball skills. He can run routes. We're going to use him in a lot of ways.

The catch of the day came from sophomore Myles Kitt-Denton who was on the receiving end of junior quarterback Clifton McDowell's second touchdown pass, this one over a defender near the back corner of the end zone.

McElvain is the undisputed starter for the Bears, but Saturday was an opportunity for McDowell and the rest of the quarterback room to show who should be his backup.

McDowell, a Louisiana-Lafayette and Kilgore (Texas) College transfer, played every snap for the Bears' second unit and has consistently been the No. 2 behind McElvain. Local products Austin Myers (Vilonia) and Caden Sipe (Harding Academy) split time with the third string. Brown said building depth behind McElvain is going to be crucial.

"I thought the whole quarterback room did a great job of managing the game," Brown said. "... Obviously you bring every recruit and every player in to make an impact and be a player, and that's part of knowing your role is when you are a backup, and in particular a quarterback, one guy plays. It's not like you can have multiple quarterbacks on the field at a time, so you always have to be ready when your number's called.

"A scrimmage situation like this is a great opportunity for those guys to get some live reps, and get the bullets flying by them and see how they're gonna react and respond, and I think our young group did a good job." 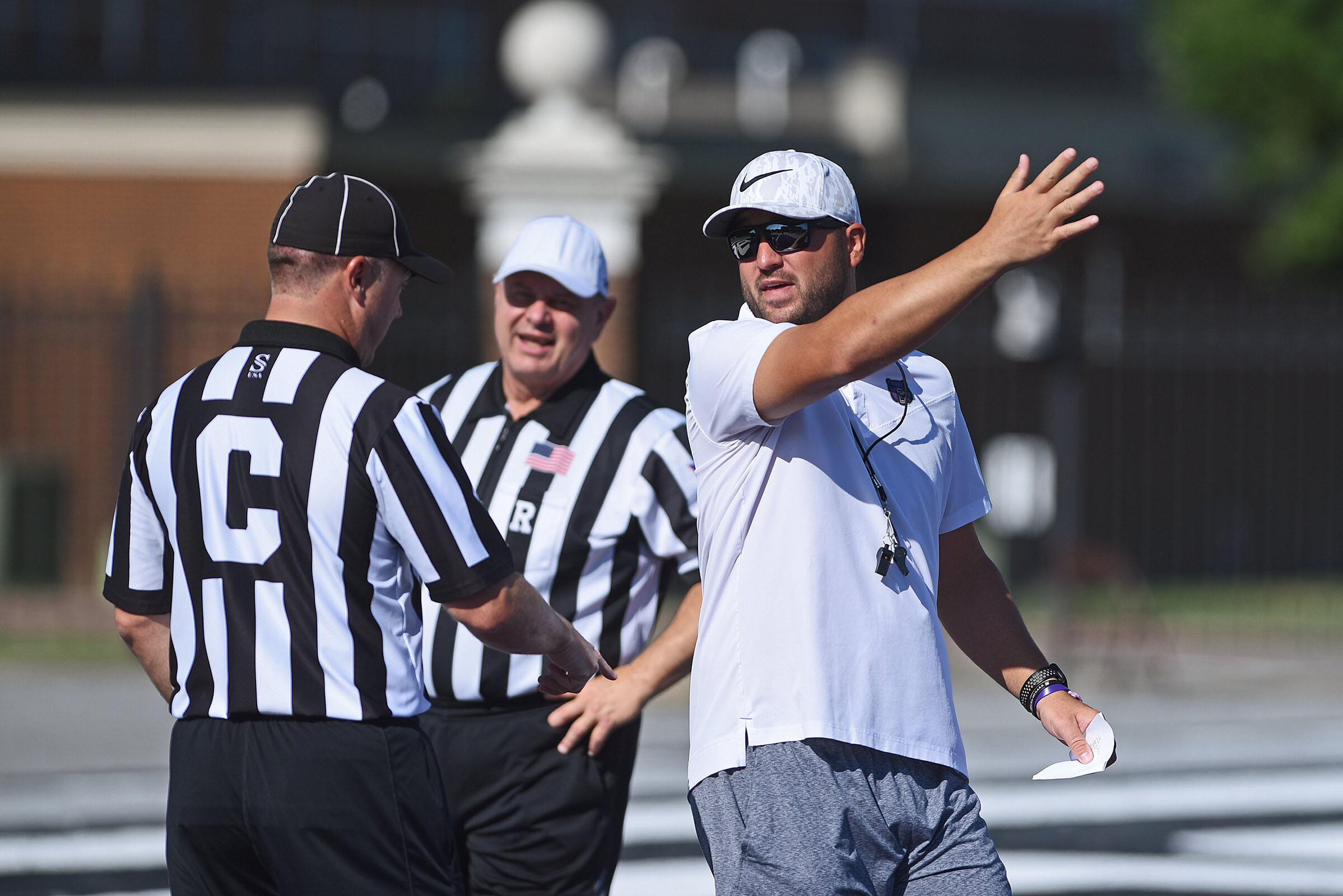 University of Central Arkansas Coach Nathan Brown (right) talks to the referees during the Bears’ scrimmage on Saturday at Estes Stadium in Conway. (Arkansas Democrat-Gazette/Staci Vandagriff)