TELEVISION: ‘A League of Their Own’ series up to bat 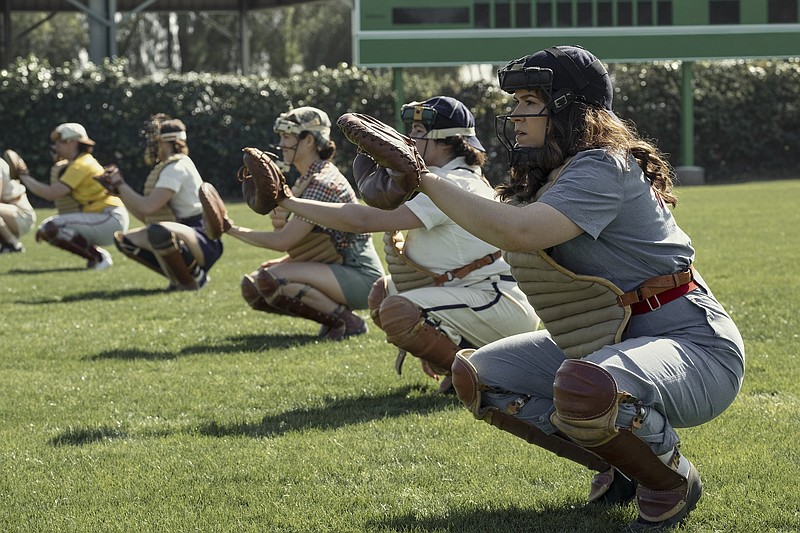 Before becoming the Rockford Peaches, women went through a series of tryouts, as depicted in “A League of Their Own.” (Prime Video/TNS/Nicola Goode)

I, like many women of my generation, absolutely loved the 1992 movie "A League of Their Own." Because of that, I got goose bumps the first time I saw the trailer for the new "A League of Their Own" TV series, which premiered Friday on Amazon's Prime Video. The previews of the eight-episode reboot have fans like me excited to get another glimpse of the world of women's baseball in the '40s. But that doesn't mean we're not apprehensive, nervous about what we'll see and how it compares to the nostalgia felt about that film.

In an interview with The Hollywood Reporter, co-creator and star Abbi Jacobson warns viewers that the show will be "as original as we could make it, being based on that real league," referring to the All-American Girls Professional Baseball League, but adds there will be nods to the movie. The trailers hint at racial tension and same-sex romance — and at first blush it appears the beloved movie has been updated to bring issues of race and sex to the forefront.

Of course, there are going to be differences between a two-hour movie and an eight-episode show simply because there is so much more time. And that's really what this show is about in a sense — turning the volume up on things the movie was only able to briefly touch upon while also muting things that were at the center of the film.

The show opens in 1943, in the fictional town of Lake Valley, Idaho, with catcher Carson Shaw (Jacobson) running down a tree-lined dirt road, a train slowly passing just beyond her.

Then, in a nod to the Penny Marshall movie starring Geena Davis and Tom Hanks, Carson nearly misses the train, throwing her bags in just as Davis' character, catcher Dottie Hinson, did in the film. This time, however, the conductor is not pleased and after she makes her way to her seat, a little boy looks back at her and says, "You look crazy." That (and the swearing) is your first clue the show isn't going to be just like the movie.

When we meet Carson, she has already been scouted (Jon Lovitz's problematic scout Ernie Capadino apparently deemed extraneous). When she lands in Chicago for tryouts and walks onto the field, we're almost eight minutes into the episode and already at tryouts (as opposed with nearly a half-hour in the movie).

The film's central struggle between Dottie and her grousing sister Kit Keller (the incomparable Lori Petty) is eliminated. Carson has a sister — but she's only seen off-screen (and is incredibly unsupportive of Carson's baseball antics). Instead, the show highlights the relationships the players develop, showing how a group of strangers with myriad personalities bump and bristle against one another on their way to becoming a team.

Also shoved to the background is the role of the coach — portrayed here as the slippery former MLB player Dove Porter (Nick Offerman), who is decidedly uncharismatic. And before anyone thinks the movie was squeaky clean — remember that charismatic coach Jimmy Dugan (Hanks) signs a baseball for two boys with the inscription, "Avoid the clap, Jimmy Dugan" and tells someone: "Girls are what you sleep with after the game, not what you coach during the game."

This truly is a show about the women.

First, there are several nods to the original movie. When Carson steps off that train she's in a baseball uniform with the words "Jensen's Seed" on the back, styled almost exactly like the "Larsen's Dairy" jerseys Dottie and Kit wore in the film. Many of the players in the new show are styled similarly to ones in the film. The pinup-esque Greta Gill (D'Arcy Carden) is an obvious nod to Madonna's sultry Mae Mordabito, just as Jo De Luca (Melanie Field) brings to mind Rosie O'Donnell's wisecracking Doris Murphy. There's a sweet, giddy blonde in the style of Evelyn Gardner (the recipient of Jimmy's iconic "no crying in baseball" line) and a stern, unflinching chaperone.

However, the looks are where the similarities end. There's room for these characters to breathe and become three-dimensional in a way Mae and Doris couldn't. There's also more time spent with other players on the team that lends a richness to this world that goes beyond flashy baseball montages.

And while the original film gave only the briefest of nods to Black women and their inability to participate in the League, the show fully integrates those characters with fiery pitcher Max Chapman (Chante Adams) and her comic book-loving artist best friend Clance Morgan (Gbemisola Ikumelo).

It also amplifies same-sex relationships and all that implied during a time when being what the show calls an "invert" or queer was punishable by law. There is a scene in the second episode where the players attend a similar sort of charm school as was seen in the film (and in real life), except this time not passing as ladylike didn't just mean the player got more makeup, it meant their dismissal.

"It's so we don't look like a bunch of queers," Greta hisses at Carson, who is making light of the situation.