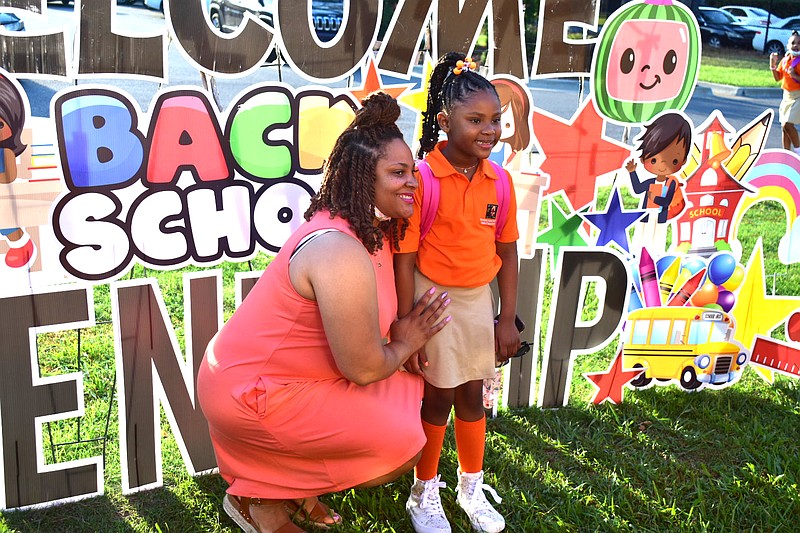 The start of a new school year was, as Harris called it, a celebration of education.

"The first day of school, as we all can remember, was traumatic," Harris said, wishing kids and their families "Good morning" one by one. "When you create an environment that's fun, welcoming and exciting, the kids respond, but more importantly, the families. You see a lot of parents who volunteered today."

Organizations such as Friendship's parent-teacher association and Kappa Alpha Psi helped welcome the kids to a new school year. DJ Wavyravy, aka Raven Gammage, spun the R&B tunes before the first bell.

Getting started the week ahead of the regular schools, Harris said, allows students to get settled earlier.

"When school starts is really important," he said. "The more you have kids in school, the more opportunities you have for learning. If we had our way, kids should be in school and learning year-round. Going to school allows us to stabilize things. It allows our parents who have multiple kids to give them special attention. Kids that start with Friendship start a little earlier than some of the other kids. Parents can go up and show up with their kids on the first day as well.

That's what many parents did as they escorted their kids out of vehicles and had them pose next to a pop-up display facing South Hazel.

"It's a great time, and we wanted to make sure our children came back with a bang," Glover said with a crescendo of excitement at the end. "We're so very excited."

As for getting started earlier than other schools, Glover remarked: "It just means an extra week of goodness."

Soon, the Friendship charter system will operate a third Pine Bluff campus at 700 S. Main St. Some kindergartners and first-graders will attend classes in that location starting in November (exact date yet to be determined) to accommodate a waiting list of families wanting to enroll their children at Friendship.

The Friendship downtown and Southeast campuses will use a slow-growth model, adding a higher grade level each school year. The middle school, which is enrolling fifth and 12th grades, will add sixth grade in August 2023 as it phases out the high school program it took over from Southeast Arkansas Preparatory School in 2020. (The plan is for the present fifth graders to progress through 12th grade at the Southeast campus.)

"It is bittersweet, but I do know that all that we offer a high school level, we can get started early now to ensure that our students will be college-ready students upon graduating from Friendship Academy Southeast," high school Principal Anitra Rogers said, awaiting the arrival of students amid ongoing construction to expand the Southeast campus into a school for grades 5-12.

"That renovation for that building, which is really exciting, is going to include 24 additional classrooms, a full gym, a full kitchen," Harris said. "We'll share with the community the design as we move [ahead], but we're excited about the design of that construction, too."

Parents expressed to Rogers some skepticism about having students seven years apart in grade levels on one campus, but she sees one benefit in the temporary alignment.

"The students are excited because it gives them an opportunity to do mentorships with the younger students," she said. Otherwise, the students will remain separated by grade, she clarified.

The downtown campus will start with grades K-1 for this school year, add second grade in August 2023 and third grade in August 2024, leaving the Hazel Street campus K-4. Where the younger students attend elementary school will depend on the parents' preference, Harris said.

"That building is going to be incredible," he predicted. "It's going to be one of the best schools in Arkansas, state of the art, and so a lot of parents are attracted to that. For a lot of kids, that downtown school will focus on the fundamentals of reading, and in partnership with the library next door, that's actually going to be a reading classroom, so we're really excited about the downtown campus is going to mean for kids in their earliest of learning, K-1 to K-3."

Elementary Principal Jherrithan Dukes said about 607 students enrolled in grades K-5, a big increase from about 400 during last school year.

"Just us doing what we said we're going to do, making sure that all of our kids are growing," Dukes said, explaining the reason behind the surge.

"The culture, the expectation and everything we're doing for the community, that's what's leading to the success," assistant principal Timothy Scott said. "The parents and the students wanted to be here."

On the other side of Pine Bluff, Lighthouse Charter School started a new school year with 215 kindergartners through eighth-graders enrolled, the school's first-year principal said. That's an uptick of three students from 2021-22.

"That's a plus for us," said Gabriel Jackson, who was most recently an English and AP literature instructor for seniors at Pine Bluff High School but also has experience as a principal. "As far as today, first things first, off to a good start. We've had positive interactions with parents and students coming in. I was telling someone if we can have another 177 days like this, we'll be OK."

Jackson broke down his goals for Lighthouse into four "anchors": a professional learning community, curriculum building, flexible age-grouping (students working together according to data) and project-based learning.

Jackson said his mission is to "be a champion for students" and maximize opportunities for student achievement and stakeholder involvement.

"Those ideas give us a fresh outlook in our learning to provide a positive outcome for Lighthouse to go from second thought to a first thought in the academic community," he said.

Bus routes and parent pick-up information for the Watson Chapel School District is available at each campus, the district announced. Bus routes may also be viewed at the district website -- wc-web.k12.ar.us -- under the Parent Resources and Transportation Department pages.

The district also reminds parents that students will be released earlier than usual each Wednesday. Regular class times for each elementary campus are 7:55 a.m. to 3:10 p.m., but on Wednesdays, the final bell will ring at 2:30 p.m. Junior and senior high students will be in class from 8 a.m. to 3:30 p.m. every weekday except Wednesday, when school is released at 2:30 p.m. 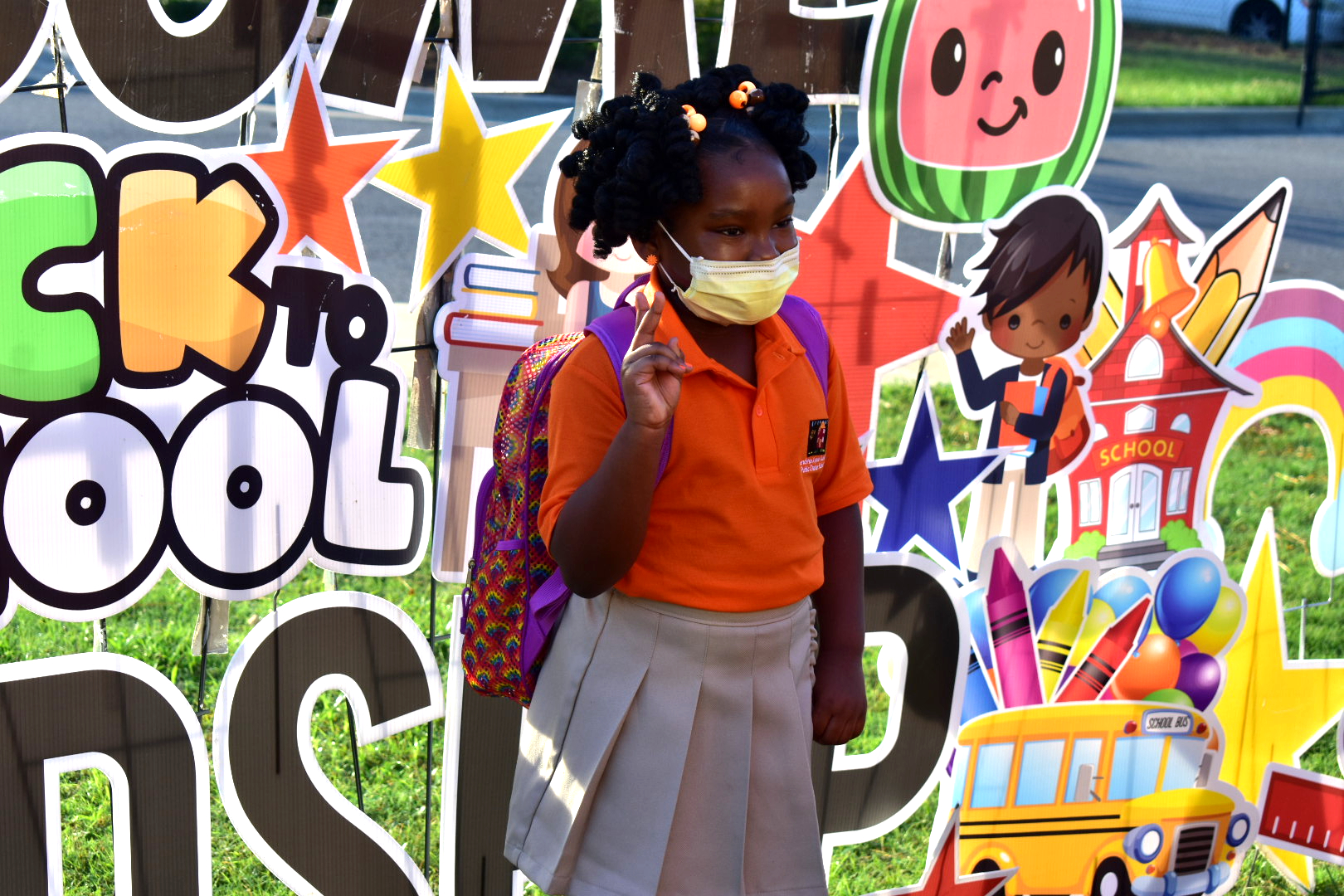 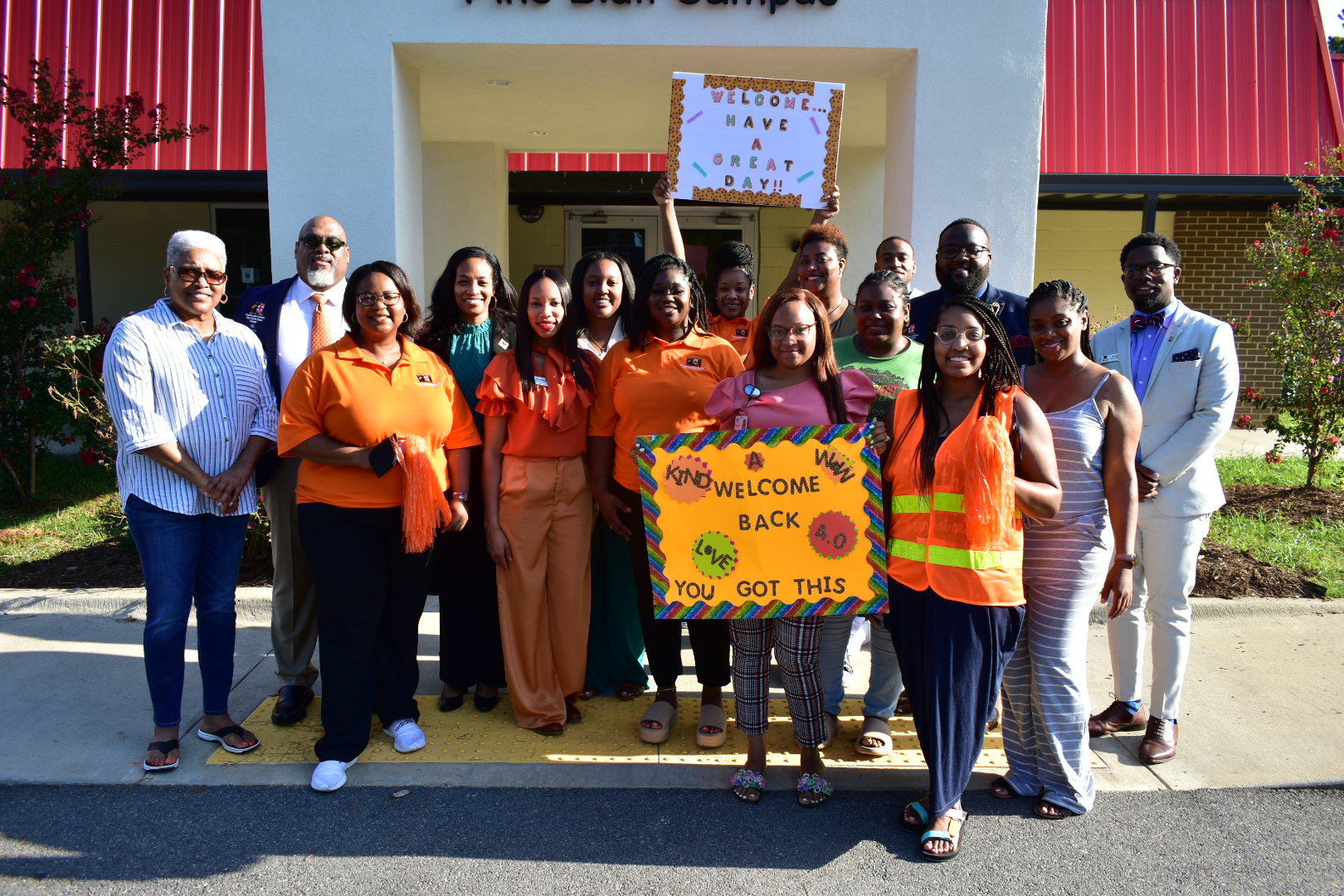 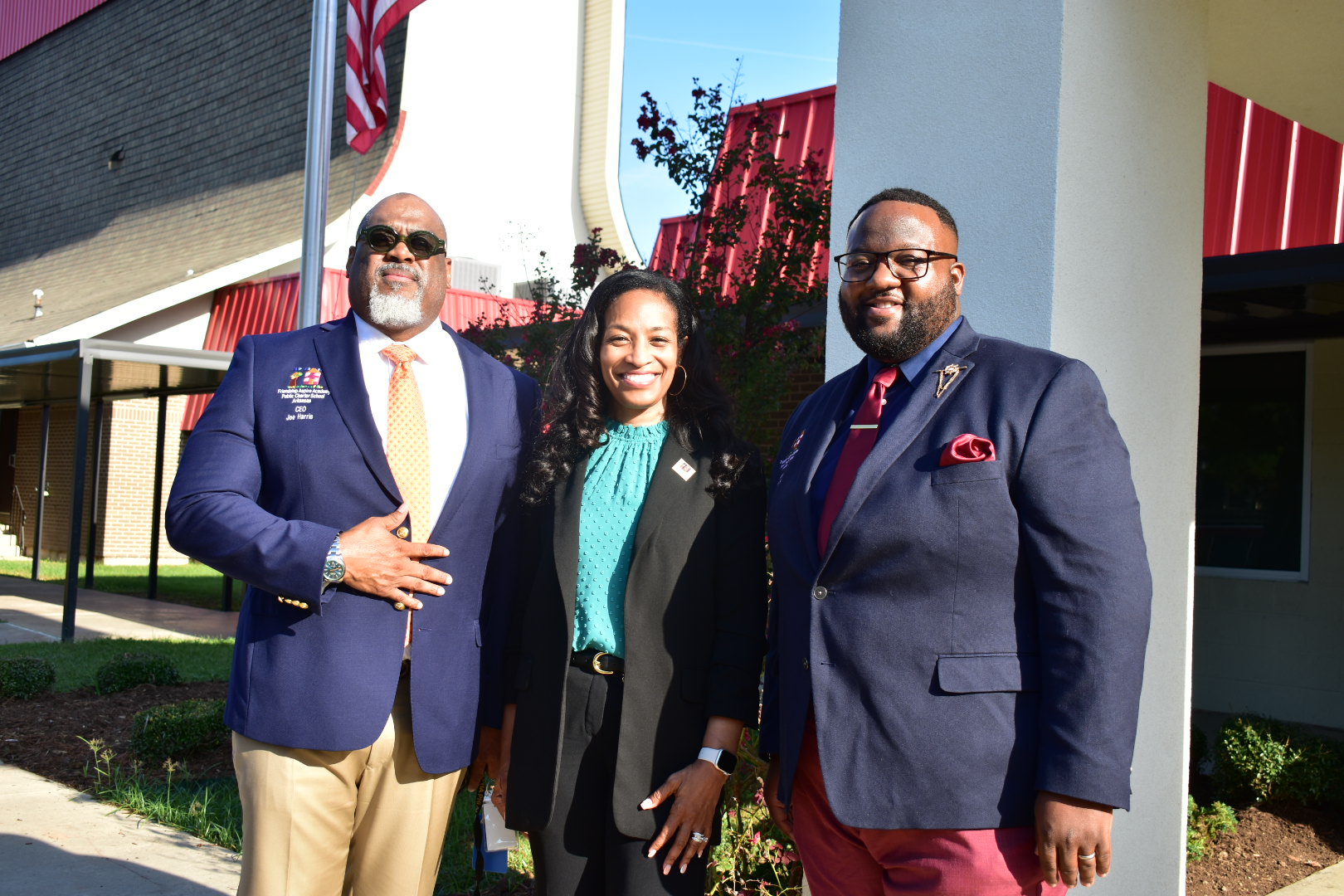 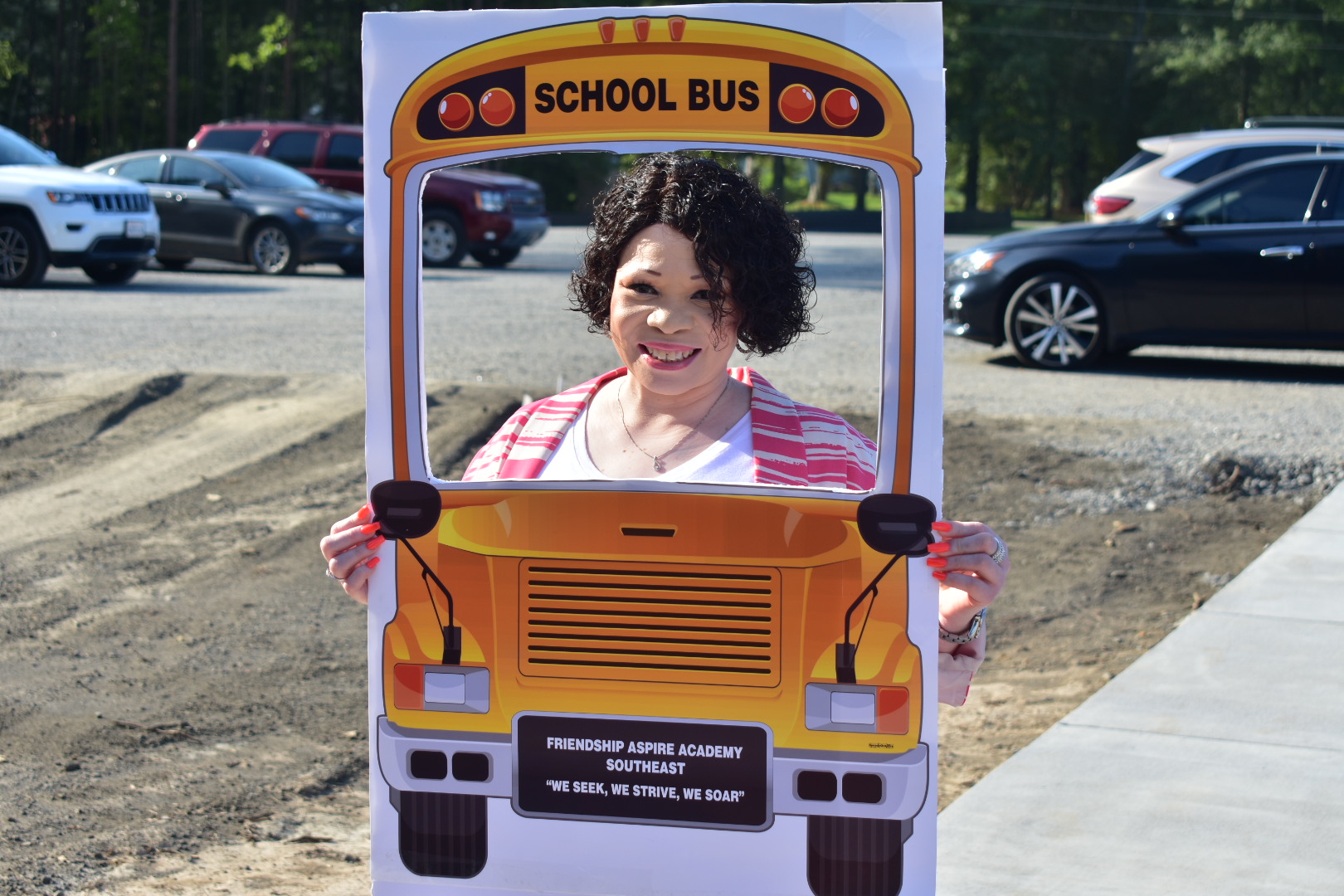 Kendra Jackson, an English language arts teacher at Friendship Aspire Academy Southeast Campus, takes a selfie with a cutout of a school bus in front of a graded plot of land before school begins Monday. The campus is phasing out the last remaining class from the former Southeast Arkansas Preparatory School, but construction is ongoing to expand it into a grades 5-12 school, adding a grade level each year. (Pine Bluff Commercial/I.C. Murrell)