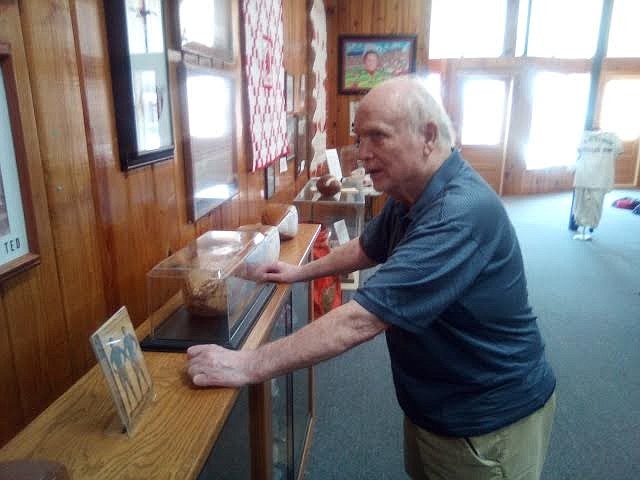 Coach Larry Lacewell looks at his memorabilia at the Dallas County Sports Hall of Fame in 2020. (Special to The Commercial/Richard Ledbetter)

Lacewell served on the coaching staff at seven colleges and universities as well as head recruiter for the Dallas Cowboys for multiple Super Bowl titles. Wherever Lacewell landed in his storied career, he always brought success to his team.

In high school, he played halfback for the Fordyce Redbugs. During his junior and senior years in 1953 and '54, Lacewell helped launch famed Coach Jimmy "Red" Parker's 76-15-4 Redbug championship run before receiving a scholarship to join the ranks of the Arkansas A&M (now University of Arkansas Monticello) Boll Weevils where he was an All-AIC running back in his junior year.

In a popular radio advertisement for a pest control company from a few years back, Lacewell began by saying, "I was a Chigger [the fifth and sixth grade Fordyce football mascot], a Redbug and Boll Weevil so I should know something about bugs."

He began coaching as a graduate assistant with Alabama Coach Paul "Bear" Bryant in 1959. Lacewell's elder son, Layne, shared how his father called Bryant for advice one day after receiving a phone call from the University of Oklahoma in 1969, offering him the job of offensive coordinator.

Lacewell told the Bear, "I didn't accept it yet and just wanted to know what you think?" Bryant responded in his deep thundering voice, "Are you crazy? You can't turn down an opportunity like that. You call them back right away!"

With Lacewell steering the Sooner offense, OU won six consecutive Big Eight championships from '72-'77 and a pair of national championships two years running in '74 and '75. He next took the position of head coach for Arkansas State University in Jonesboro, where he led the Red Wolves from 1979 to 1989 to a 69-58-4 record, making him the most successful coach in ASU history. His tenure in Jonesboro saw four back-to-back NCAA Division 1-AA championship finals, cinching the coveted title in '87 over Georgia Southern in a 48-21 contest.

The next big stop on Lacewell's journey was the University of Tennessee where he served as defensive coordinator for the Volunteers, helping guide them to the 1990 SEC championship.

Following UT appearances in both the Sugar Bowl and Fiesta Bowl, Dallas Cowboys owner and fellow Arkansan Jerry Jones contracted Lacewell to be his scouting director in 1992.

"Larry was the guy who recognized talent and helped the Cowboys get a lot of great players. I went to Dallas because of Larry," Switzer said.

Working alongside yet another person with roots in Arkansas, Dallas Head Coach Jimmy Johnson, Lacewell was a vital component on the Cowboys' staff during their three Super Bowl titles from '93 to '95.

Lacewell also spent time coaching with Arkansas A&M in '62 and '63, as well as Kilgore Jr. College in '64 and '65, leading them to a NJCAA national championship and also coached at Wichita State and Iowa State before settling in Oklahoma in '69. He retired from the Cowboys and a 45-year coaching career in 2004, returning to Jonesboro to live out his days.

At the private gathering in Fordyce's historic Oakland Cemetery, sons Layne and Logan along with their mother Criss Lacewell, Larry's brother Kenny and close family friend Nicole Jackman, quietly said their good-byes to a man who loomed large on the American football scene.

"I knew Larry for 56 years and all I can say is he was one hell of a recruiter," Criss Lacewell said.

Clearly, it was a title Lacewell deserved.

Brother Kenny said laughing, "All he studied all his life was sports."

Among these, Lacewell holds a special spot in the hearts and minds of his hometown as shown by the recent renaming of a street to Larry Lacewell Lane where Redbug Field and Paul "Bear" Bryant Stadium is located.

In a final gesture before interring Lacewell's ashes next to his parents, the family shared a small portion of his cremains, spreading them on the 50 yard line of Redbug Field. 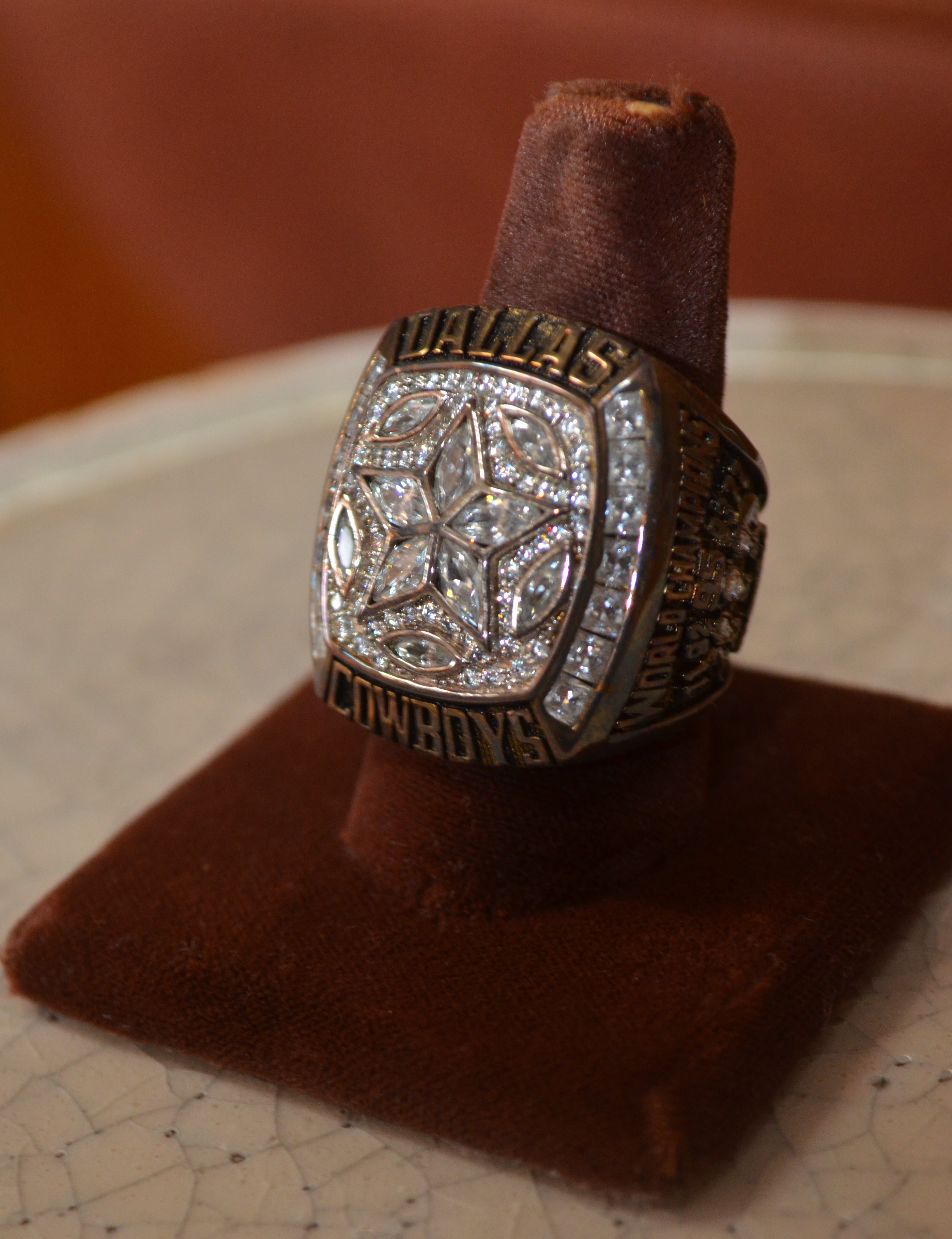 Larry Lacewell had a replica made of his Super Bowl championship ring which he gifted for display in the Dallas County Sports Hall of Fame. (Special to The Commercial/Richard Ledbetter) 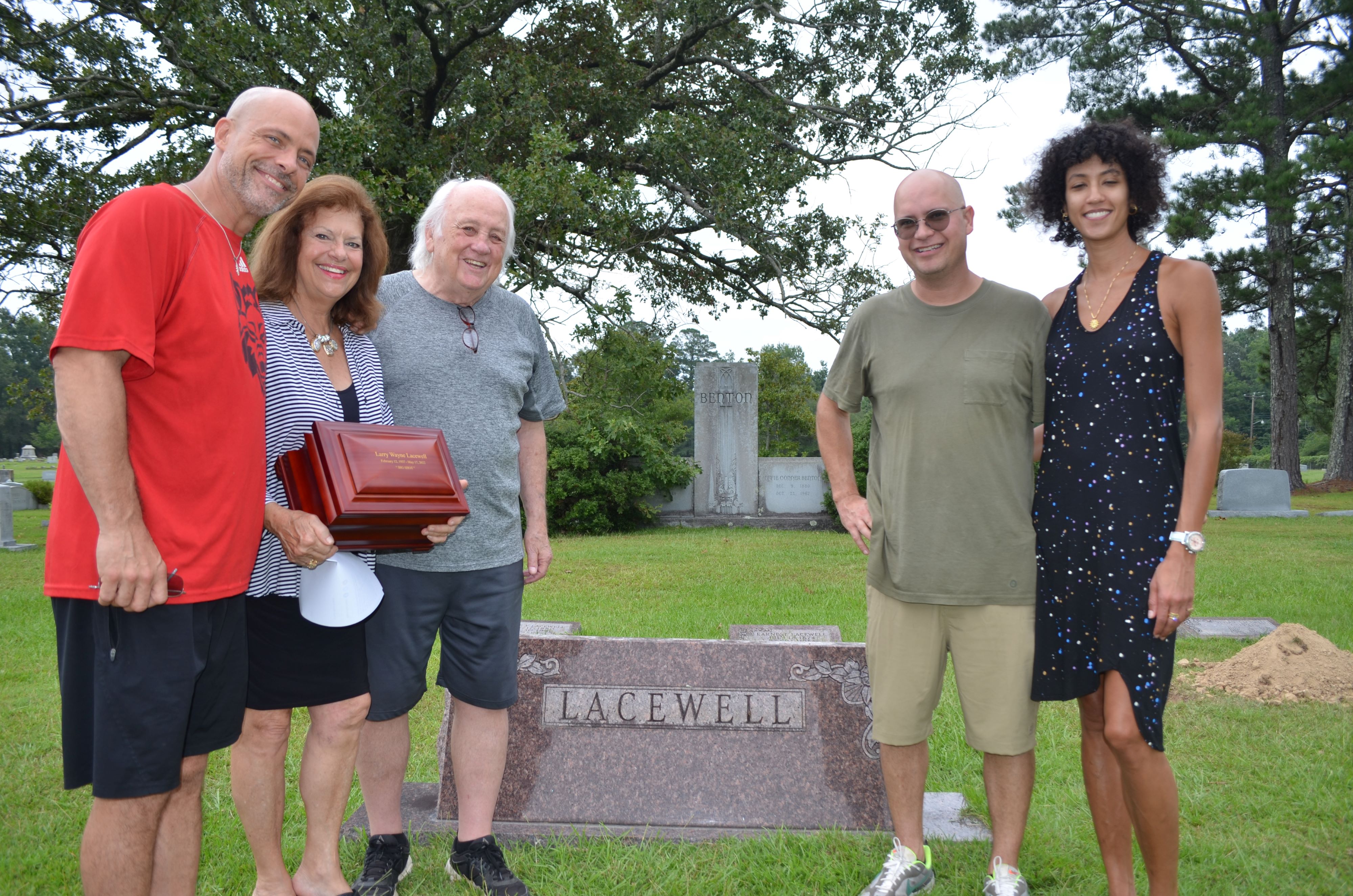