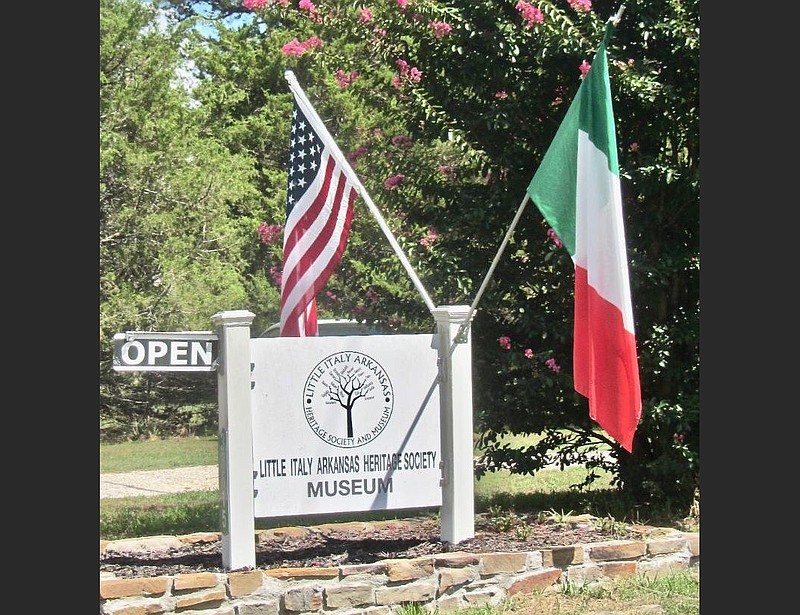 LITTLE ITALY — At Little Italy Arkansas Heritage Museum, no shame is attached to the bootlegging of illegal alcohol. In fact, exhibits celebrate the residents' Prohibition Era making and selling of wine as a mark of ethnic enterprise.

Little Italy was in the news in 2015 when some of the area's 400 or so residents sought incorporation as a municipality. That effort was denied in court due to objections related to protecting the surrounding watershed. But the communal effort helped inspire the Little Italy Arkansas Heritage Society's creation of the museum along Arkansas 300 on the line of Perry and Pulaski counties.

The site's brochure cites the hundreds of items that "illustrate the attainment of the immigrants' American dream, their culture of hard work, their devout faith, and the unique economy of a Prohibition Era alcohol oasis nestled in the hills of Arkansas."

Along with displays about the making of wine, visitors get "a glimpse into the life of early 20th-century immigration into the United States. The museum's five galleries weave a narrative of the hardships and adversity faced by Italian families who settled in the Arkansas wilderness more than a century ago."

It may be debatable whether the fringe of Pulaski County qualified as "wilderness" in 1915. But adversity, including prejudice against Italian-Americans, seems to have been real enough. That is evident in a posted comment by Brunetta Vaccari Carosariol, a daughter from one of the early families:

"At school they made fun of us. They always heard that Italians are mean and cut-throats. And see, like my teacher didn't know how to pronounce my name, which was Brunetta. So that's why I am known as Bernice because she didn't know how to say Brunetta."

One exhibit makes the point that "music was a key form of entertainment in Little Italy. For many musicians, the accordion was the instrument of choice, because its sound reminded them of the songs of their homeland."

A display case contains an assortment of spheres roughly the size of grapefruits. These were deployed in the Italian game of bocce. The balls on display were used for the lawn-bowling pastime at Little Italy Beer Joint, which maintained one of the settlement's several bocce courts.

Families planted vineyards almost on arrival. Exhibits make clear the hard work involved in growing and harvesting grapes. The vines became much more profitable after the 18th Amendment's ratification in 1919 made the selling of alcoholic beverages illegal in the United States. 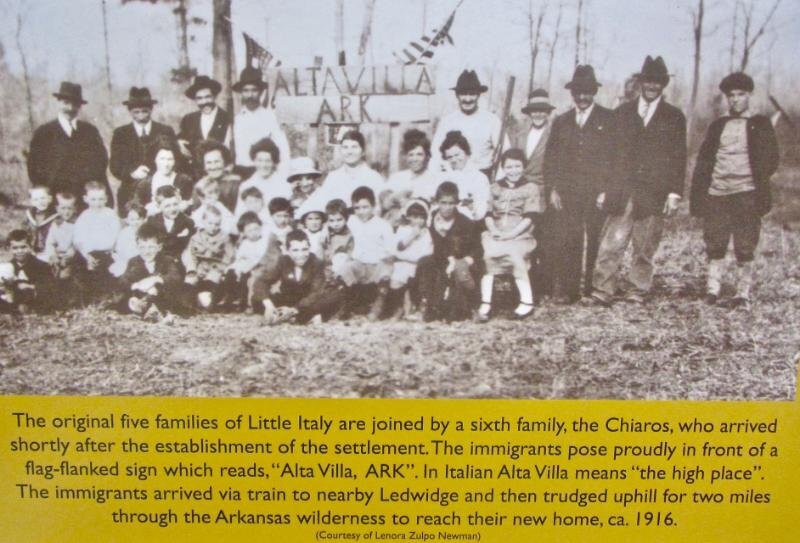 The settlement’s first five families pose in 1916 when the name was still Alta Villa. (Special to the Democrat-Gazette/Marcia Schnedler)  A quotation posted at the museum from an article in the Pulaski County Historical Review portrays the Little Italy bootleggers as actual good citizens during the 14 years that the amendment remained in force.

"The Prohibition-era political establishment of Central Arkansas recognized the life-saving service Little Italy's residents provided to the wider community by guaranteeing safe alcohol to the people of the region.

"The quality of the products made by the Italian winemakers, and the cooperative spirit through which they operated, drove down competition from lesser-quality bootleggers in the area, resulting in fewer cases of alcohol-related deaths ... compared to other regions of the nation.

"Thus the region's politicians guaranteed that local consumers from the state's largest metropolitan area purchased clean, reliable alcohol from skilled immigrant vintners rather than the unidentifiable bathtub gin commonly found in other regions of the country."

By the end of national Prohibition in 1933, safe-to-drink wine was coming from four thriving enterprises: Segalla Winery, Balsam Winery, Solda and Vaccari Winery, and Ghidotti Winery. After World War II, the local wineries were devastated by vine diseases. Wine is made locally today only for family consumption.

That leaves the museum to toast the years when bootleg wine made Little Italy the life of the party.