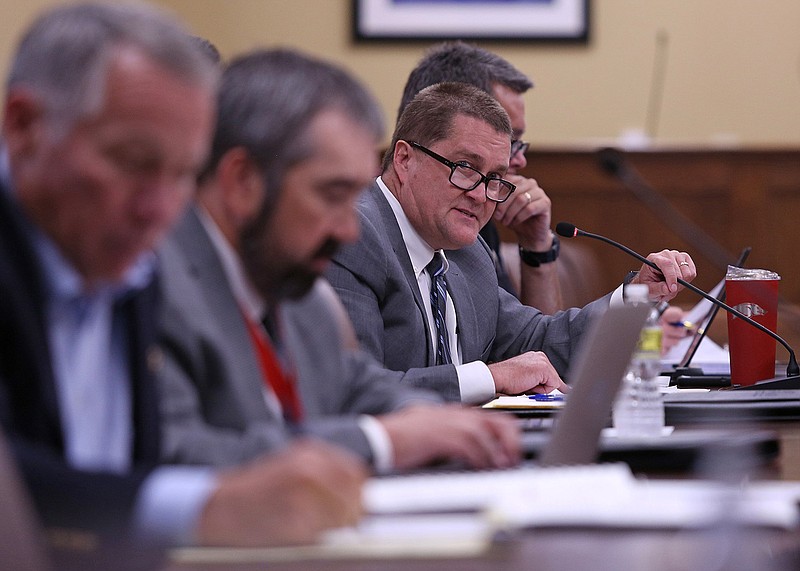 Tim Cain, Director of the Division of Elementary and Secondary Education - Office of Public School Academic Facilities and Transportation at center, addresses a meeting of the Arkansas School Safety Commission at the state Capitol on Tuesday, August 16, 2022. (Arkansas Democrat-Gazette/Colin Murphey)

A new set of finalized recommendations from the Arkansas School Safety Commission focuses on ensuring the state is on the same page when it comes to training and protocols.

• Having an armed presence in each building on campus and, if not financially possible, to hire the needed law enforcement personnel to have armed security or staff available to provide the armed security detail for the day.

• District campuses allow their security cameras to be accessed by select individuals, including law enforcement during a critical incident.

• All exterior and classroom doors be closed and locked during school hours.

• Allowing for law enforcement to create educational programs and community relationships to encourage the reporting of suspicious activity.

• That school districts should use the free phone app SITE ASSESS, developed by the U.S. Department of Education, to conduct school safety assessments.

• That school districts do routine safety checks to ensure safety policies and procedures are being followed.

• That all school staff who interact regularly with students be required to take at minimum the free online one-hour mental health basic awareness class if they haven't gone through training in Youth Mental Health First Aid.

• That behavioral assessment teams undergo training from the Arkansas Center of School Safety to identify and assist an at-risk student.

• That if a school has an anonymous reporting system, the district is required to have a behavioral threat assessment team.

Other recommendations are expected in future meetings.

Legislators in a special session last week approved a $50 million grant program that will be used to address recommendations made by the state's safety commission.

Republican Gov. Asa Hutchinson said he hopes schools will use the commission's recommendations when making requests for funding.

Hutchinson reinstated the School Safety Commission on June 10 in the aftermath of several mass shootings across the nation. The state's original school safety commission, created in March 2018, submitted 30 recommendations in its 124-page report. Some schools have implemented portions of the original recommendations, but schools are not mandated to follow the recommendations.

Under the governor's executive order, the current commission is charged with reviewing the previous commission's report published in November 2018 and providing an update on the status of school safety across Arkansas.

Chris Chapmond, chief of the Hot Springs Police Department and head of the communications subcommittee, also made a recommendation requiring that anyone who interacts with school district devices such as laptops, smart phones or other devices to go through an annual cybersecurity awareness training along with monthly reminders on cybersecurity safety.

"It will cover students, not only staff," he said. "We have learned that schools are one of the most vulnerable entities to cyberattacks. In the state, four out of 10 schools have had confirmed data breaches. We believe this number is actually underreported. It's a bigger problem than we realize and something needs to be done to address this at a statewide level."

Mike Hernandez, executive director for the Arkansas Association of Educational Administrators, told commission members he liked the idea but said the annual training to go along with monthly updates gave him pause.

"I feel like an annual cybersecurity session could get repetitive very quickly," he said.

Hernandez suggested that the training be required for every new hire into a school district and then have the training every two or three years to go along with monthly training.

Dr. Cheryl May, director of the Criminal Justice Institute, also talked about using the 2022 State of School Safety Report, compiled by the Safe and Sound School national nonprofit organization, as a potential guide for the commission in coming weeks.

May said the annual report is a nationwide survey sent out to students, parents, educators and members of public safety on school campuses. She said the report revealed that students fall behind all other groups when it comes to the general feeling about safety.

"This indicates a general lack of confidence and/or knowledge of safety preparedness efforts among the most important stakeholders of safety, a trend which has persisted year over year in this annual study," the report stated. "Re-education on safety procedures and reporting systems may be necessary to combat the decline in safety perceptions."

May said she was intrigued by the finding and that she believes it's an important point to consider.

"One of the things that we have never talked about was how much school districts communicate with students about school safety," she said. "We know staff goes through drills, but when it comes to students and parents, I don't know what kind of communication they have with them."

The school safety commission is still receiving results from its own survey that was sent out to schools last month.

"We are up to 210 responses to the survey, which means we are at an 81% response rate," May told the commission. "We have 51 school districts that have not completed the survey. We were having discussions earlier today on how to prompt them to do so."