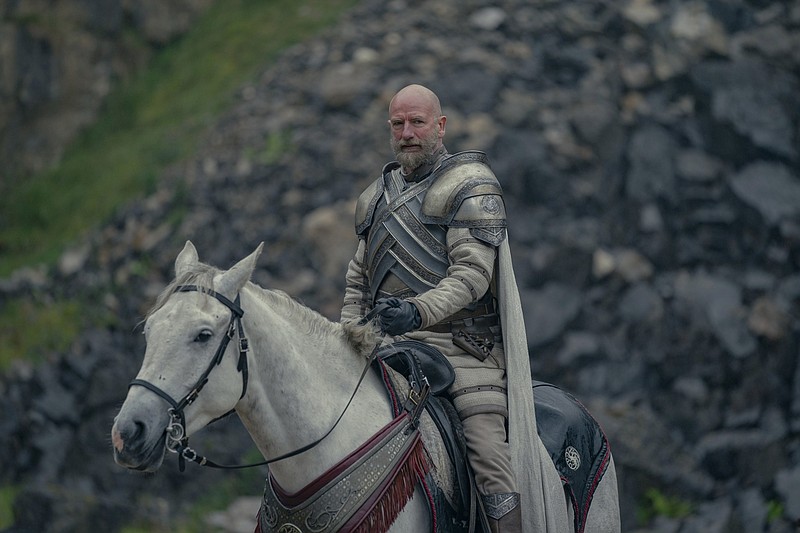 Graham McTavish plays the good guy in “House of the Dragon.” (HBO/TNS/Ollie Upton)

Anticipation for the first "Game of Thrones" spinoff series has been hotter than a dragon's breath.

The opening episode of "House of the Dragon," premiering Sunday on HBO, has everything "Thrones" fans would expect from a sister show — love, betrayal, brutality, battles, sex, shock and, of course, dragons.

But amid the madness, a rare noble character, Ser Harrold Westerling, strives to uphold integrity in the fictional continent of Westeros.

"In a world of vipers, which is the world of anything to do with 'Game of Thrones' or 'House of the Dragon,' he's a straight arrow," Graham McTavish, who plays Harrold, said. "He's a moral center in the story.

"He's not corrupt. He's not personally ambitious in the same way that other characters might be. He doesn't have that kind of agenda. So he represents something quite pure in a world where that's hard to come by."

The new show, a prequel set 200 years before "Game of Thrones," centers on House Targaryen and the members of that family that rule over the Seven Kingdoms of Westeros. They're the ancestors of Daenerys Targaryen, the silvery blond-haired beauty who was revered as a slave liberator before she went mad and unleashed her dragon to torch her enemies and innocents in the last season of "Thrones."

In "Dragon," Ser Harrold is a longtime Kingsguard who gets promoted by King Viserys Targaryen early in the season to Lord Commander of those royal bodyguards. He's tasked with protecting and serving Viserys and his first-born child, Princess Rhaenyra.

"He becomes the principal protection and shadow to everything that the king is involved in," McTavish said of Harrold. "The Kingsguard, they're a sort of warrior monk-type. They get chosen as children, they're not allowed to marry, they don't have relationships, they don't have any money, they forsake all their land and estates. They are simply focused on looking after, in this case, the princess and the king."

An intense conflict emerges in the first episode as to who will eventually succeed Viserys on the Iron Throne, with Rhaenyra in the running as well as Prince Daemon, the king's younger brother.

"It always sounds a little boring, but he's a very interesting counterpoint to the other stuff that's happening," he said.

"House of the Dragon" is based on George R.R. Martin's 2018 "Fire & Blood" novel. Martin, who's a co-creator of the prequel show, also wrote the fantasy novels that were adapted into "Game of Thrones."

"Dragon" is far from the first onscreen project McTavish has appeared in that stemmed from fantasy novels. He played Dwalin in "The Hobbit" film series, and both Dougal MacKenzie and William Buccleigh MacKenzie in the Starz show "Outlander."

"I have a habit of really not reading the source material for these things, because in the end you're working from the script," he said. "I want to also have the imaginative freedom to think, this is how I see Ser Harrold. I always try and approach these things without that baggage so it's a little more of a clean slate, so that you make your own imprint."

Similarly, McTavish said he did not focus too much on the pressure of "Dragon" following the enormous success of "Thrones," which was HBO's most-watched show ever. Nor did he dwell on the feelings of some fans who weren't happy with the last season of "Thrones."

"There is a very loyal fanbase," McTavish said. "They have their views and there are the stories themselves, but at the same time, we also needed to make it our own. So my version or [the other actors'] versions of any of the other characters, they're down to us and in collaboration with the writers and directors."

The 10-episode first season of "Dragon" will have a midseason time jump of 10 years. Some of the younger characters, including Rhaenyra, a teenager when we first see her, will be played by more than one actor.

"They do less-drastic stuff for me," McTavish said. "Basically, I had a darker beard in the first half. In my case, it was a slow deterioration from someone who was 50 to someone who was 60. I was very pleased. There were no wigs or anything like that."

McTavish says the shock factor of "Game of Thrones" was what helped draw him in.

"Right from that moment where poor old Sean Bean (Ned Stark) has his head chopped off in the first season, I was completely hooked," he said. "We'd never seen anything like that before. You're like, 'What? You're killing Sean Bean? This is going to be an interesting show.'

"And this very much lives in that tradition," he said of the prequel. "There are lots of surprises and shocks."