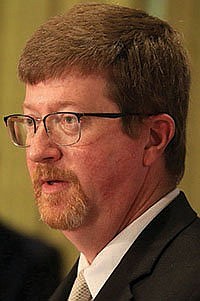 Keefer's appointment was announced Wednesday by Arkansas Education Secretary Johnny Key, who called Keefer "a perfect fit for the job as we continue to support school districts as they work to ensure the safety of all students."

He replaces Suzanne Jones, the previous coordinator, who has retired from the position.

As the safe schools coordinator, Keefer will serve as the Division of Elementary and Secondary Education liaison to school districts, the Criminal Justice Institute, Arkansas Center for School Safety, Arkansas State Fusion Center, and other agencies. Additionally, he will assist with carrying out the recommendations from Gov. Asa Hutchinson's Arkansas School Safety Commission.

And he will collaborate with the different units within the Elementary and Secondary Education Division -- including Equity Assistance, School Counseling and School Health Services -- to share information regarding cyber security and physical and environmental security, as well as implement and manage the STOP School Violence Prevention and Mental Health grant.

He will coordinate and serve on the agency's School Safety Committee and will provide school safety training around the state and at conferences, according to the announcement of his appointment.

Keefer has been a special agent in charge for the Arkansas Attorney General's Office since November 2020. During that time, he managed a budget of more than $1 million and supervised the Executive Protection Unit, Internet Crimes Against Children Investigations Unit, Digital Forensics Laboratory, Public Integrity Division, Metal Theft Prevention Program, and the Training Unit.

"Special Agent in Charge Keefer's leadership has been instrumental to the success of my administration's ability to protect children from online exploitation and those who seek to harm them," Attorney General Leslie Rutledge said. "SAC Keefer is a well-respected and dedicated member of law enforcement whose expertise will benefit the Department of Education, but more importantly, the schoolchildren of Arkansas."

Keefer has been a patrol officer, detective, Special Response Team member, training officer, and support services sergeant for the Jacksonville Police Department from February 2001 to April 2015. Before that, he was a detention deputy for the Pulaski County sheriff's office and served in the U.S. Army from June 1994 to August 1996.