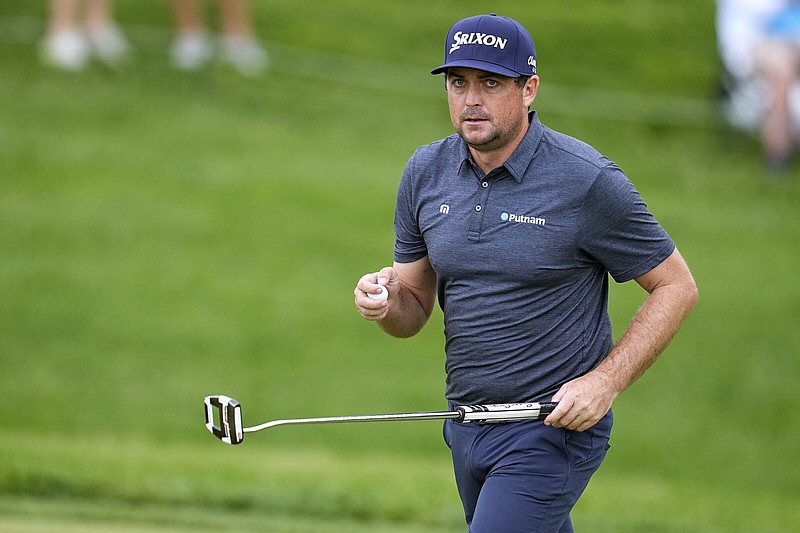 Keegan Bradley walks on the 18th green during the first round of the Memorial golf tournament, Thursday, June 2, 2022, in Dublin, Ohio. (AP Photo/Darron Cummings)

Keegan Bradley hasn't been to the FedEx Cup finale in four years, and he started the BMW Championship in Wilmington, Del., on Thursday like he was in a hurry to get back. Bradley matched a career low with a 29 on the front nine at Wilmington Country Club and finished with a 7-under 64 to take a one-shot lead over Adam Scott. Bradley is at No. 44 in the FedEx Cup and likely needs a top 10 -- he hasn't had one since the U.S. Open -- to be among the 30 players who advance to the Tour Championship in Atlanta to chase the $18 million prize. Scott started the postseason at No. 77 and tied for fifth in the playoff opener last week just to make it to the second stage. Now he's at No. 45, giving him a chance. It also meant being paired with Bradley, and they put on quite a show. They combined for 15 birdies. PGA champion Justin Thomas put a different putter in the bag and responded with a 66 to leave him in the group with former British Open champion Shane Lowry and Harold Varner III. Former University of Arkansas golfer Taylor Moore shot a 2-over 73.

Louis de Jager shot an 8-under 64 to to equal the course record and take a one-shot lead over two-time champion Thomas Pieters after the opening round of the Czech Masters on Thursday. Seeking his first European tour title, the South African completed a flawless round with an eighth birdie on the par-4 18th. Pieters, who is the highest-ranked player at the event at No. 35, set the pace with three birdies on the opening three holes. He added two more birdies on the sixth and eighth before dropping a shot on the par-5 10th. Former University of Central Arkansas golfer Pep Angles of Spain shot a 4-under 68.

Philip Knowles posted a 10-under 61 to lead at the Korn Ferry Tour's Boise Open. Knowles holds a two-stroke lead over Min Woo Lee at the Hillcrest Country Club in Boise, Idaho. Nicolas Echavarria (Razorbacks) hit a 4-under 67. Zack Fischer (Benton) and Austin Cook (Jonesboro, Razorbacks) each shot a 1-under 70. David Lingmerth (Razorbacks) finished with a 2-over 73.

FIU football player Luke Knox, who appeared in 23 games at Mississippi before joining the Panthers and was the brother of Buffalo Bills tight end Dawson Knox, has died, the university said Thursday. Luke Knox died Wednesday evening, school officials said. The cause was not revealed, though the university said police do not suspect foul play. Knox, who studied business, was 22. FIU players were told of Knox's death late Wednesday. Thursday's practice was canceled, and grief counselors were brought in to meet with the team and others from the university community.

The Green Bay Packers claimed wide receiver Travis Fulgham off waivers from the Denver Broncos. Fulgham had 38 catches for 539 yards and 4 touchdowns for the Philadelphia Eagles in 2020 but was released after training camp the following year. He appeared in one game for Denver in 2021 and spent the rest of the season on the practice squads of the Broncos and Miami Dolphins.

American Madison Keys upset No. 1 Iga Swiatek 6-3, 6-4 to reach the Western & Southern Open quarterfinals in Mason, Ohio, on Thursday. Swiatek, a two-time Grand Slam champion, hasn't gotten past the round of 16 in four tournaments since winning Roland Garros in June. The win was the 24th-ranked Keys' first in six matches against a top-ranked opponent. She had never won a set against a No. 1 player. After dropping the first set and losing the first five games of the second, Swiatek rallied to win four in a row, fighting off one match point before Keys clinched with a forehand winner to the ad court off a shot that clipped the net. Swiatek won her first two matches against Keys, including 6-1, 6-0 earlier this year at Indian Wells. Keys is scheduled to next meet Wimbledon champion Elena Rybakina, who easily advanced with a 6-2, 6-4 win over Alison Riske-Amritraj.

Nazem Kadri is going to the Calgary Flames, leaving the Colorado Avalanche after helping them win the Stanley Cup for the first time since 2001. Calgary announced a $49 million, seven-year contract Thursday, meaning Kadri will count $7 million against the salary cap through 2029. The move came shortly after the Flames traded forward Sean Monahan to the Montreal Canadiens to free up space under the salary cap. Kadri, who turns 32 before opening night, had arguably his best NHL season in his third year with Colorado. He set career highs with 59 assists and 87 points in 71 games, and that success continued into the playoffs.

Kurt Busch said Thursday he'll miss the final two races of NASCAR's regular season, bringing it to six races the 2004 champion has been sidelined with concussion-like symptoms. Busch wrote on Twitter he'll miss Sunday's race on the road course at Watkins Glen International and then the Aug. 27 regular-season finale at Daytona International Speedway. Busch crashed July 23rd during qualifying at Pocono and has not driven the No. 45 Toyota since. Ty Gibbs will continue to drive for Busch.

A prominent New York-based horse trainer whose Early Voting won this year's Preakness Stakes is facing a domestic violence charge for allegedly pushing a woman down a flight of stairs and trying to choke her, authorities said Thursday. Chad Brown, 43, was arraigned Thursday morning in Saratoga Springs on a charge of obstruction of breathing, a misdemeanor. Police received a complaint at around 11 p.m. Wednesday from a caller who said "they were in an altercation with Mr. Brown," Saratoga Springs Police Sergeant Paul Veitch said. Brown was arrested and spent the night in a police holding area pending arraignment. Assistant District Attorney Kayla Potter told the judge that Brown pushed the woman down the stairs, pinned her to the floor and tried to choke her before throwing her out of the house. 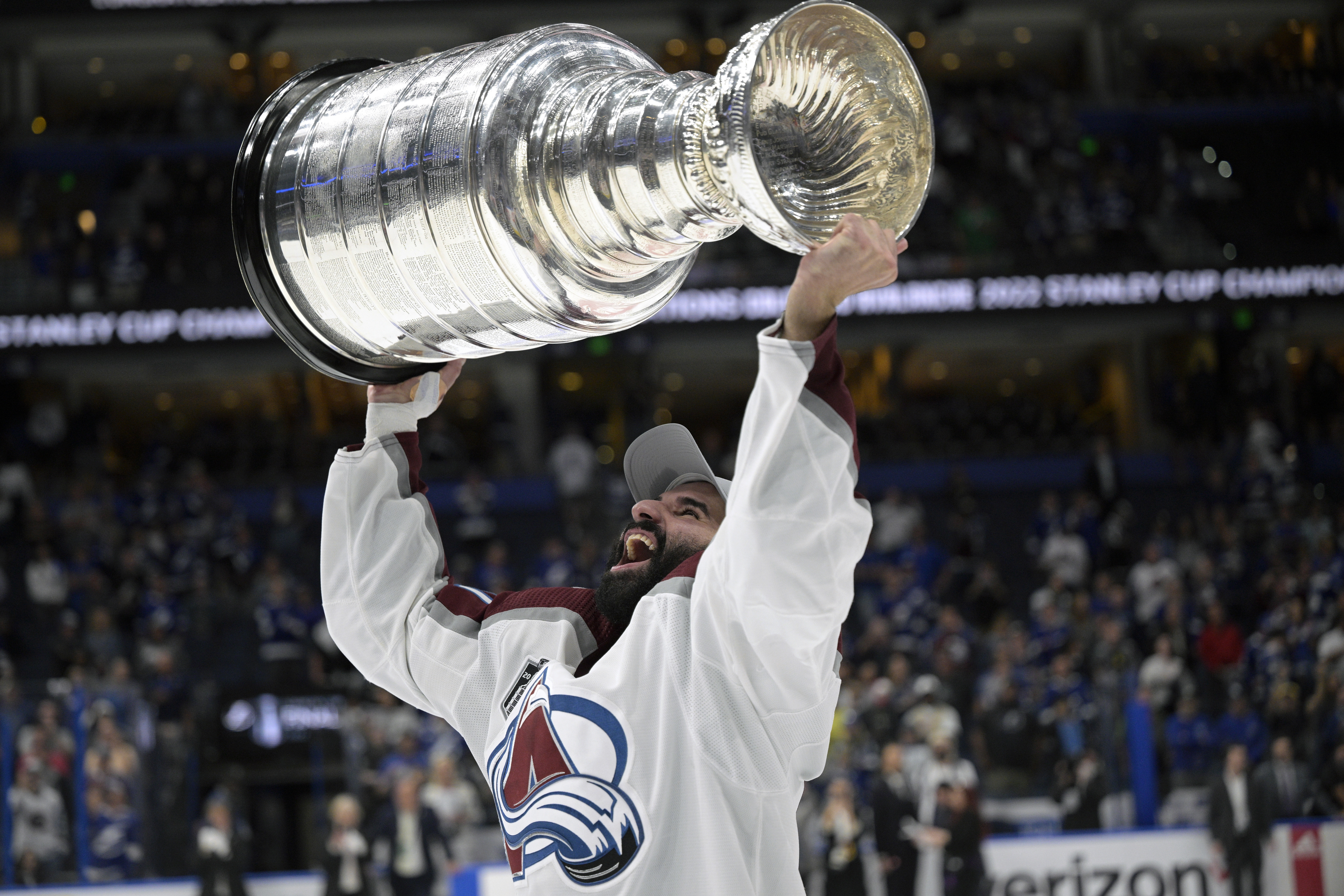