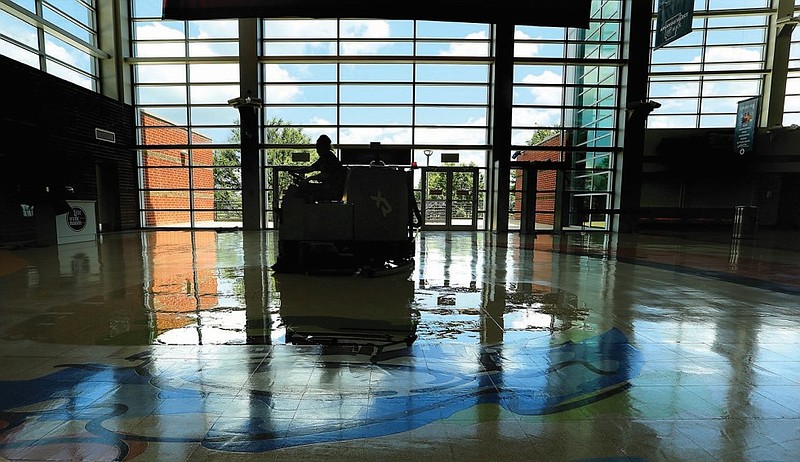 NORTH LITTLE ROCK -- Operators of the Simmons Bank Arena in North Little Rock have notified school systems and higher education institutions that they will no longer make the large venue available for graduations.

"It's due to safety concerns," Jana DeGeorge, the arena's director of marketing, said Thursday. "In 23 years we have had three shootings outside of the building and they all have been at graduations."

Shots were fired most recently May 17 after the North Little Rock High School graduation that night, according to police and DeGeorge.

Officers responded to the shots around 9:15 p.m., according to reports by police at the time. Shortly before the shots, police had been alerted to a possible disturbance with a weapon near the intersection of Riverfront Drive and Olive Street, about a block south of the stadium. No injuries were reported and no weapons were located at the scene.

That was preceded just days before by a shooting after a May 12 graduation in Hot Springs, DeGeorge noted.

"We want it to be safe and it's not safe, so we are not going to do it," DeGeorge said about forgoing graduations in the arena that can hold as many as 18,000 people. "I'm sure there are some [institutions] that are not happy, and I totally understand that."

The arena typically hosted 12 to 15 graduations a year, DeGeorge said.

"All the schools have been called earlier this month to let them know that we weren't going to be hosting graduations anymore. That includes UAMS and Baptist Health. It's not just high schools," she said.

The North Little Rock School District highlighted on its website this week the news about Simmons Bank Arena, and that, as a result, the high school's Class of 2023 graduation ceremony will occur across the Arkansas River, June 1, 2023, at the Jack Stephens Center on the campus of the University of Arkansas at Little Rock.

"We wanted to share this information well in advance so that our seniors and families can prepare for this big day," district spokesman Dustin Barnes posted on the website.

Leslie W. Taylor, vice chancellor for communications and marketing for the University of Arkansas for Medical Sciences, said the university has used the North Little Rock arena for commencement exercises for several years, most recently at a cost of $24,389.

"It has been a wonderful location and provided us with enough seating for our nearly 1,000 graduates taking part in commencement and their family members," Taylor said. "This year we had several thousand people in attendance and most of the arena was full, even a great deal of the upper deck. We appreciate all of the staff of the arena and have enjoyed working with them on this event.

"We are moving commencement to Barton Coliseum for May of 2023," Taylor said.

The Bryant Class of 2022 graduation ceremony was hosted at Simmons, as was the ceremony in 2019 and years prior to that, Bryant spokeswoman Devin Sherrill said Thursday.

The Bryant High School event that attracts as many as 10,000 people used War Memorial Stadium in the spring of 2021.

After recently learning that Simmons would not be available, Bryant district leaders are currently evaluating venues for the Class of 2023's graduation ceremony, Sherrill said.

The Little Rock School District in the past two years has taken the graduation ceremonies outdoors -- using War Memorial Stadium in Little Rock -- and will do so again.

The district first used the stadium in 2021 and again in May 2022 at least in part as a way to limit the spread of covid-19. The outdoor stadium seats more than 50,000 people and attendees could practice social distancing. War Memorial has been selected for the 2023 events, district spokeswoman Pamela Smith said Thursday.

The Pulaski County Special School District has in recent years held its graduations at the Jack Stephens Center at UALR.

The North Little Rock-based Simmons arena opened as Alltel Arena in October of 1999, as a central Arkansas site for sports, entertainment, and meetings and conferences. The arena was later renamed Verizon Arena before becoming what is now the Simmons Bank Arena.

The arena is publicly owned by the Multi-Purpose Civic Center Facilities Board for Pulaski County. The arena was funded by a combination of local, state and private monies.