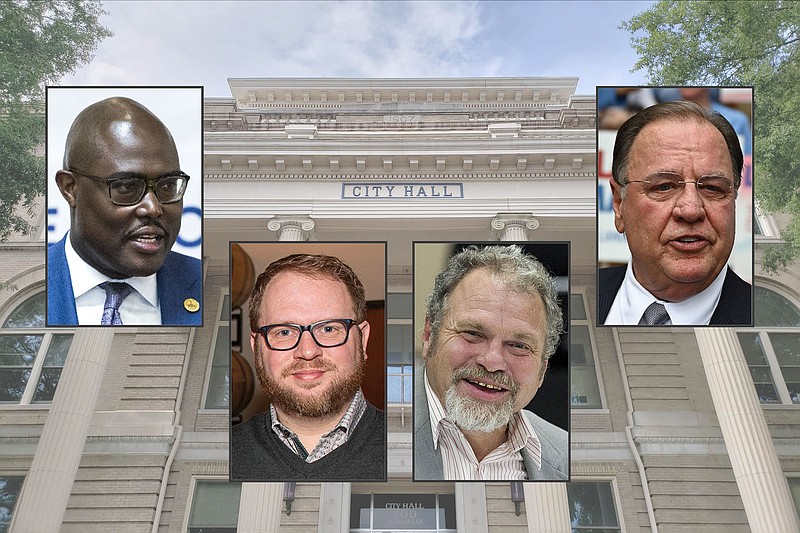 Three challengers have filed to run against Little Rock Mayor Frank Scott Jr. this fall as of the close of the city's filing period, which began July 29 and ended at noon on Friday.

Glen Schwarz, a perennial candidate in local races, filed to run for mayor on Thursday, joining Greg Henderson and Steve Landers Sr. in the Nov. 8 contest against Scott, who is seeking a second term.

Additionally, three of the six ward-specific seats on the ballot in November will be contested.

Incumbent City Directors Ken Richardson of Ward 2, Kathy Webb of Ward 3 and Brenda "B.J." Wyrick of Ward 7 did not draw any challengers by the time the filing period closed.

Schwarz previously ran for mayor in the 2018 contest to replace then-Mayor Mark Stodola, who declined to seek a fourth term. Schwarz came in fifth out of five candidates during the initial round of voting in November 2018.

In 2020, Schwarz sought the at-large city board seat then held by the retiring City Director Gene Fortson. Antwan Phillips, a local attorney, defeated Schwarz and five others to win the seat.

Henderson is the president/publisher of the food blog Rock City Eats as well as a real-estate agent. He unsuccessfully ran for positions on the city board in 2018 and 2020.

Landers is a first-time candidate and member of the Arkansas Racing Commission who built a series of car dealerships beginning in the early 1970s with his father.

If no mayoral candidate wins at least 40% of the vote on Nov. 8, a runoff election between the top two individuals will take place the following month. The runoff threshold does not apply to ward seats.

In Ward 1, City Director Virgil Miller Jr. is expected to face Herbert Broadway and Kenyon Lowe Sr. this November in an attempt to win a full term of his own. City board members appointed Miller last year to fill the remainder of the term of Erma Hendrix, who died in office in September at age 91.

Lowe is the chairman of the board of Little Rock's federally funded public housing authority.

In 2018, Broadway and seven others, including Henderson, ran unsuccessfully against Hendrix, who was reelected.

Hendrix's daughter Loretta Hendrix initially announced a bid for mayor in January and later said she planned to run for the Ward 1 seat.

However, by Friday's filing deadline, Hendrix did not appear on the list of candidates provided by the city clerk's office. She did not return a voicemail Friday.

Ward 1 encompasses downtown Little Rock as well as nearby communities that run east to the Arkansas River and west to South University Avenue. The ward's population of 28,232 is roughly 71% Black, 22% white and 7% Hispanic, according to the city.

City officials must verify the qualifications and petition signatures of the individuals who file to run. Winners during the current election cycle will serve four-year terms that begin Jan. 1.

The November election will be the first time voters elect ward representatives since ward boundaries were redrawn late last year to account for population changes reflected in the 2020 census.

Although the mayor presides over meetings of the city board, he or she does not vote except in the event of a tie. The mayor holds veto power over measures the city board approves, but a veto can be overridden with a two-thirds vote by the board.

As a result of a 2007 Little Rock referendum, the office of the mayor is a full-time position. Nevertheless, the government structure also includes a city manager who serves as chief administrative officer and oversees many day-to-day activities.

According to the city clerk's office, the complete list of candidates who have filed to run for municipal office is as follows: