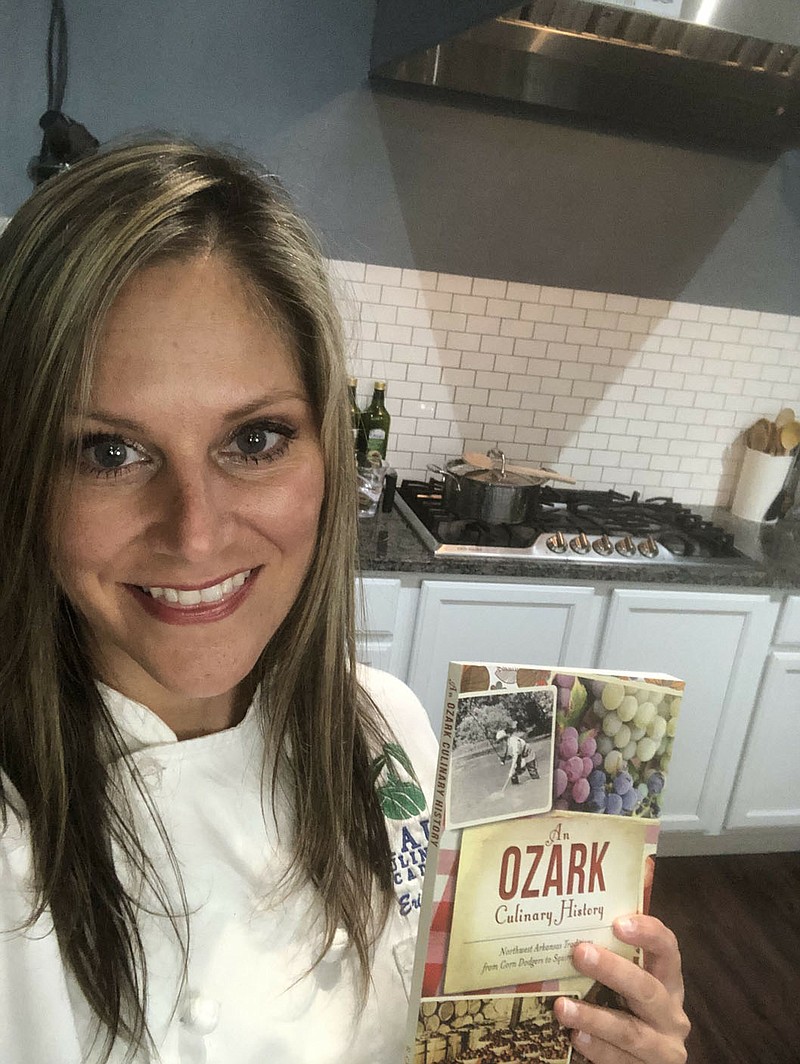 This year Chef Erin Rowe booked Cane Hill’s historic farmouse on the hill, which was built in 1895, for the recording of a PBS show on Ozark foodways. In the Emmy Award-winning show, she and Chef Rob Connoley discuss the roots of Arkansas food and the importance of that food history. Catch it on Arkansas PBS and find out more at myarkansaspbs.org. (Courtesy photo)

Chef Erin Rowe has always had a fascination with those recipes so many of us get from our grandmothers. You know the ones: They have no measurements because she never measured it herself, and you try again and again to replicate it but it's never quite right -- something's always missing.

When Rowe came back from culinary school at the University of Hawaii Maui College, where she'd had some early experience as a food writer, the rich food history of Northwest Arkansas was something that kept rolling around in the back of her mind as something worth writing about.

Since the publication of her book "An Ozark Culinary History: Northwest Arkansas Traditions from Corn Dodgers to Squirrel Meatloaf" in 2017, Rowe started making even more use of all that local history research she did by offering culinary tours to groups. The events combine food tastings and stories of the Ozarks that you might not know or hear elsewhere.

Most people come up with a book idea first and then find a publisher. How did your book come about?

It was the opposite direction for me. The book contract was God-ordained. I was managing a gift shop when I was approached by a publisher who wanted me to sell a certain book. I recommended that it wouldn't sell (there) but what would was a book about food history of the Ozarks and asked "Do you have that book?" They didn't, so I launched into a plan: "Here's how it should be structured" ... and went on a tangent, noting local people to interview and what it should cover and (at the end was like) "Well, you know what? I guess I could write the book."

I had a unique position, having a culinary degree and being from here, so I set out on a year and a half adventure researching and writing about the Ozarks.

The book description says that you picked Muscadines, gathered wild watercress and tracked honeybees. It sounds like you really got into the thick of it, like you really experienced the traditional Arkansas methods to be able to write this in an informed way.

I was going around Northwest Arkansas getting the stories from people, collecting an oral history, not sitting in a library and seeing what's already been documented. I drank a ton of sweet tea and moonshine and ate the best cornbread I've ever had, any which way people make you feel welcome in the Ozarks. That's how I took recipes passed down by oral tradition and got them written down for the first time, from people who have never measured and would say, "I don't know, a little of this, little of that."

Like a field reporter, I got my hands dirty.

What were some of those one-of-a-kind experiences you had while gathering folks' recipes and stories?

I canned hominy 40 jars at a time with no air conditioning in August. It made me want to strip down to my itty bitties, but we had just met. At one point, she said, "OK, my back went out," and had me take over, but warned, "Don't blow a hole through my ceiling!"

Another day I pulled over to the side of the road, where men in cowboy hats were selling grapes. I asked them about the concord (grapes) and where they picked them. There was still dew on them. They said they had picked them that morning right there in Tontitown and that the practice went five generations back (in their family who had been there) since Tontitown founded. I asked if I could come pick grapes with them and they said, "Sure thing." They gave me the address, and I showed up at dawn.

How long did it take you to put the book together, once the research was done?

I took a year and half to research, and I enjoyed it so much. By the time I did that, the book was due in 12 days and I wrote it then. But to keep it to 150 pages, I would end up using only one quarter of the information I got. I could have written three more books.

Your subtitle includes "corn dodgers," but I have to admit I've never heard of them. What are they?

A corn dodger is a poor man's cornbread. There was a corn dodger poem (by) the Arkansas Traveler that talks about corn dodgers. They're only three ingredients: salt, lard and cornmeal rolled into a cone and fried on the skillet or on the grill. People who didn't have much money (could make that cheaply).

And I can't help it, I've got to know more about this squirrel meatloaf.

I participated in the (World Champion) Squirrel Cook Off (in Bentonville) with friends and about 50 other teams during 2016 when I was researching the book. We got third place. It was interesting to see people participate around a meat that most people would turn up their nose to. One recipe is squirrel meatloaf, but you could make it with rabbit. These are Ozark traditions, something you would have normally seen at people's houses, but now it's not (common). That cookoff was also the first place I sold books, from the back of a wagon, while wearing an apron.

What if someone is not much of a cook? Could they still get something out of this book?

Yes, I always tell people that it's more a history book than cookbook. It's food history with the Ozarks interwoven, and I reflect on the stuff in the history. There are 30 or 40 heirloom recipes.

Are the recipes easy enough to make?

Yes, these are ones that children would have been taught before they could read or write things down. [They] would memorize these to make them, so they're very easy. But there are some gourmet as well. The ingredients are easy to access too; the only thing hard to find is lard. This is for the average cook and represents a heritage.

Which recipe(s) do people make the most?

Many have made the cornbread and said it's the best cornbread they've ever had. It was one of those that had been passed down orally and never written -- I had to write it down because they had never measured it. Like other traditionally Southern cornbread, it is not sweet and it's made in an iron skillet. It's more savory, good with duck or fried chicken or on its own with butter.

Also the 48 hour refrigerator pickle. It's easy to make with kids at home just putting vinegar over the cucumbers, setting it on the counter and then (transferring to the) fridge and you're good to go.

The last in the book is the chocolate gravy recipe. It's more of a sweet dessert, but one of those that nobody has their recipe from mom or grandma. The reviews on Amazon mention this one a lot: "I hope it's like my grandma's!" or "I finally found it, I'm so excited!" I love how happy they were.

Since you have so much material, will there be a second or third volume of Ozark Culinary History?

I've thought about another ... but right now I'm focusing on food tours. Ultimately I got the idea for these tours while writing the book, these guided walking tours downtown to tell history and unique culinary (elements of the region), which is what I do for a career. But maybe down the road.

What's one of the biggest things that came out of the making of this book?

Something that impacted my life ... I met so many people in the process of interviewing. Wonderful people who feel like family. Now I make a pilgrimage to Cane Hill once a quarter and stay with friends out there I made through research of this book. Some hadn't (ever) worked in the corporate world; people who are still making it on the old way of life. I just love going back there. I feel like I'm the adopted daughter of the Cane Hill community.

April Wallace is the Profiles writer/editor/coordinator for the Northwest Arkansas Democrat-Gazette. Email her about new books you love at awallace@nwaonline.com.

Print Headline: Chef’s unique experiences led to a compiled history previously only carried on by word of mouth