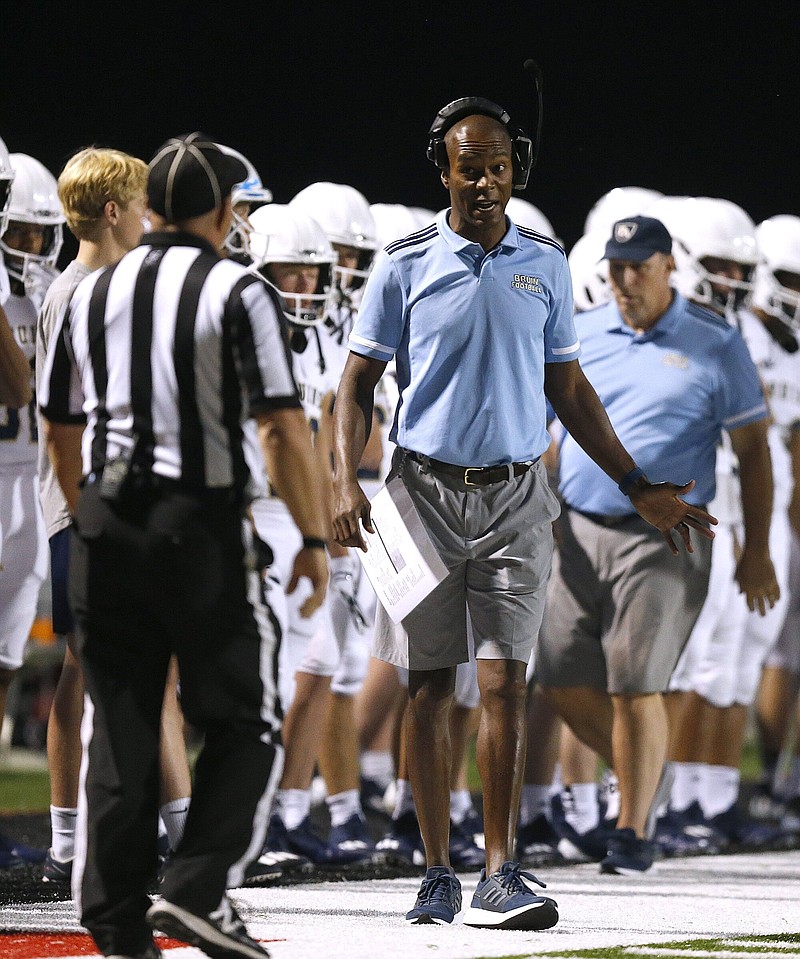 There's a buzz around the Pulaski Academy program this year. It's a feeling that's been brought about by a new challenge -- one that has been absent for quite some time in west Little Rock.

Pulaski Academy, the Arkansas Democrat-Gazette's preseason No. 1 team, is moving up to Class 6A this season, having won seven of the last eight Class 5A state championships while playing in the other.

The Bruins have seen unprecedented success at the Class 5A level over the last decade, so the chance to change classifications and face new opponents is a welcomed one.

Pulaski Academy Coach Anthony Lucas succeeded longtime successful Kevin Kelley prior to last season, following nine years as an assistant. Lucas led the Bruins to a 13-1 record, going undefeated within the state of Arkansas and winning a state championship in his first attempt.

Lucas said it won't be easy to maintain the level of success his program saw at the Class 5A level but isn't going to change what has worked in the past.

The Bruins routinely seek out elite non-conference competition out of state, and 2022 won't be any different as they travel to face 2021 Mississippi state champion Madison-Ridgeland Academy in Week 2.

Lucas believes the practice of seeking out the best competition, regardless of state, will pay dividends as his team changes classes.

"That's why we play the non-conference schedule we play. To get ourselves ready for tough play in conference play, whether it's 5A, 6A, we're very excited about it," Lucas said.

The Bruins featured the nation's second-most passing yards, just shy of 5,000. But quarterback Charlie Fiser, the director of that offense is gone and so is 2021 Arkansas Player of the Year Joe Himon at running back.

Replacing them will be junior quarterback Kel Busby, who has garnered Division I interest as a baseball pitcher, and junior running back Kenny Jordan, who racked up 10 touchdowns and 1,137 all-purpose yards complimenting Himon.

"Since Kel got here in spring football, from that time until now he's really come a very long way," Lucas said. "He's still not there. But he has improved and I feel really good about our quarterback situation."

Busby will have the luxury of throwing to arguably the state's best receiving core, headlined by Jaylin McKinney.

The Bruins won't be without challengers, however.

Along with Pulaski Academy, Little Rock Christian moves up a class and into the 6A-West. The Warriors are the Arkansas Democrat-Gazette's preseason No. 3 team, led by junior quarterback Walker White who has received scholarship offers from the University of Arkansas, Ole Miss and Florida, among others.

The pair move into what is arguably the toughest conference from any classification in the state. They will join 2021 Class 6A runner-up Greenwood, the Arkansas Democrat-Gazette's preseason No. 2 team, 2021 Class 5A semifinalist Greenbrier, which is also reclassifying and 2021 Class 6A quarterfinalist Lake Hamilton.

"Our conference is as good, top to bottom, as any conference in the state. I'm not sure how they came up with the idea to put all those things in our conference," Greenwood Coach Chris Young said jokingly. "But we want to play good football teams."

His Bulldogs won the 2020 Class 6A state title but fell to El Dorado in the final last season. They have consistently been among the elite of the class and don't look to be going anywhere in 2022.

Young feels the deep playoff runs his senior class have experienced will pay off as they look to reclaim the class title.

"If you look at our seniors, they've been to the state championship two out of the last three years. That's eight extra football games," Young said. "They got to play almost a whole season, so it's a huge advantage for us not only having played in those ball games, but those eight extra weeks of practices that we've had the last two years versus a team that didn't make the playoffs."

On the other side of Class 6A, the East features a stout competition for the top spot between Marion, defending state champion El Dorado and Benton, the Arkansas Democrat-Gazette's preseason Nos. 4, 5 and 6 teams, respectively.

Benton went undefeated in conference play a year ago, and El Dorado rode a nine-game win streak to its first state title since 2013.

With new challengers adding to an already strong conference, each week in the Class 6A will be full of matchups with playoff implications.