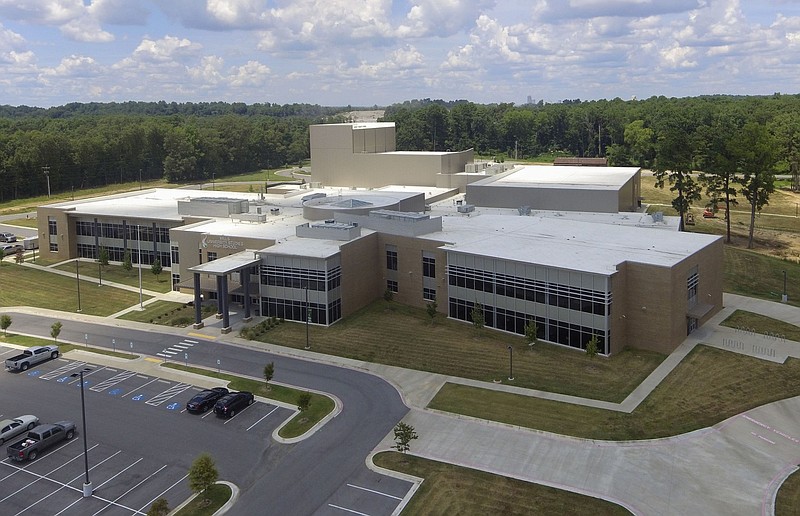 Pulaski County Special School District attorneys told a federal judge in a long-running school desegregation lawsuit last week that it is going to cost more than the $19 million previously expected to "square up" Mills University Studies High School campus with that of Robinson Middle School.

The district's legal team, headed by Devin Bates, raised the issue of escalating building costs in a status report on construction plans for Mills. The status report was requested earlier this year by Chief U.S. District Judge D. Price Marshall Jr., the presiding judge in the 39-year-old lawsuit.

The two schools were built at the same time and opened to students in August 2019 at a time when the district was obligated in the desegregation lawsuit to equalize the condition of its school buildings.

The district responded to the judge later in 2021 with plans to add 10 classrooms, a 2,200-seat arena, a softball field and a renovated JROTC building at Mills.

In the latest report, district leaders told the judge that they have tweaked the plans for 10 classrooms to make six traditional rectangular rooms plus a more open space area equal to four classrooms that will allow for flexible use.

"The proposal is a modern technologically enabled open concept academic space," the report states. "What it lacks in internal walls and convention, it makes up for in versatility and adaptability.

"True to the name Mills University Studies High School, these academic spaces will feel more like a university and less like the traditional four walls of a high school classroom. This will help to meet the needs of the students and their educators, will enable the utilization of pedagogical best practices, and will be an academic space that can be best adapted to remediate pandemic learning loss."

The design work on the plans will continue until January, according to the attorneys. Bids for the construction will be sought in February and March, with construction to start in early April 2023 and be completed by August 2024.

The attorneys did not say what they believe the new cost of the project would be but will keep the judge informed.

"Previously, PCSSD reported that this project would cost a total of $19 million," the district's legal team wrote. "That was in July 2021. Over the past year, inflation, skyrocketing oil prices, supply chain issues, and other macroeconomic forces have substantially driven up construction costs."

The legal team cited for example, the cost of an artificial turf softball field -- made in part with petroleum -- "has fluctuated astronomically."

"No one could have predicted the effect that an invasion halfway around the world would have on work done at Mills University Studies High School," the district's legal team wrote, referring to Russia's attack on Ukraine. "PCSSD is working diligently to control costs and finalize construction plans in the face of these formidable cost challenges."

Additionally, the legal team reported that the district intended to use approximately $4 million in federal American Rescue Plan money for the Mills building project but that the state of Arkansas "has now taken steps that may have complicated and may ultimately frustrate these efforts."

The special federal funding was provided as a way to offset the impact of the covid-19 virus on schools and the economy in general. Arkansas lawmakers have recently suggested that the funding to districts be used, at least in part, for employee bonuses.

Attorneys also reported to Marshall that district voters approved a proposed debt restructuring plan that will create a funding source for Mills and for projects at other campuses.

[STATUS REPORT: Read the statement filed with the court » arkansasonline.com/822pcssd/]

"While some of these other campuses and other projects had historically been a part of this litigation," the attorneys said, "the Court's May 2021 order narrowed down the focus to a comparison between Mills University Studies High School and Robinson Middle School."

The projects at campuses other than Mills are noted, the attorneys told the judge, not because they are issues in the lawsuit but to tell the judge that Mills is not the only construction site in the 12,000-student system.

The attorneys also said that the district has held one community meeting on its districtwide construction plans on May 12 and a second community session is planned for Aug. 30 to solicit feedback on the building plans.