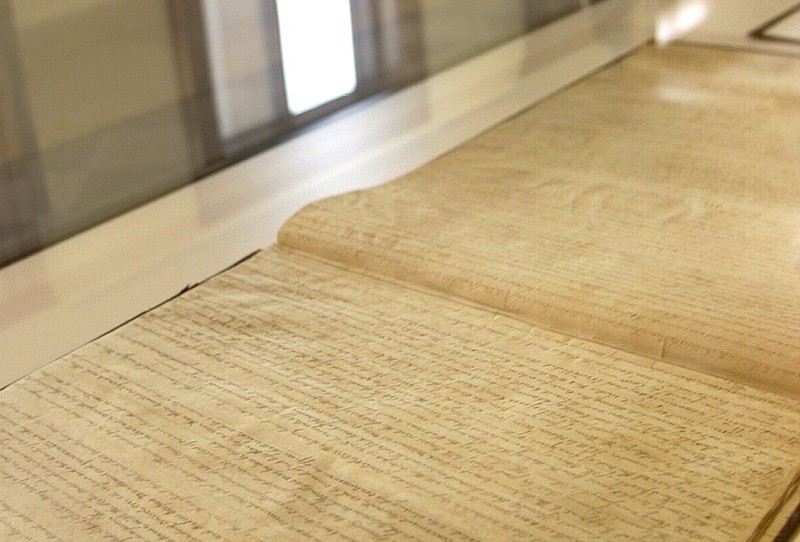 The original copy of the Arkansas Constitution, penned in 1836, is displayed under glass in the Justice Building in Little Rock in this April 27, 2001, file photo. (AP/Danny Johnston)

FAYETTEVILLE -- A 2009 state law forbidding one person from acting as translator for more than six voters in casting their ballots violates the federal Voting Rights Act, a U.S. District judge in Fayetteville ruled Friday.

A provision of the 1965 federal law allows voters who require assistance because of an inability to read or write to get assistance from a person of the voter's choice, U.S. District Judge Timothy L. Brooks ruled.

Arkansas United, a Springdale-based immigrants rights group, filed the lawsuit Nov. 2, 2020. Brooks' order told state and county election officials to cease trying to enforce the six-person limit and strike all mention of it from election materials.

"Without any basis, Arkansas has sought to set an arbitrary limit on assistance to duly registered voters," Thomas A. Saenz, president and general counsel to the Mexican American Legal Defense and Educational Fund, said in a statement. The civil rights group represented Arkansas United in court. "Such a limit is fundamentally anti-democratic, and the federal court has now appropriately eliminated the state's arbitrary limit on American democracy."

The Arkansas Secretary of State's Office, a defendant in the lawsuit, has not decided whether to appeal.

"We are aware of the ruling and are reviewing it," spokesman Chris Powell said Monday. "We are having discussions with the Attorney General's Office as to what any next steps might be."

The case did not go to trial since both sides agreed to make their cases in briefs filed with the court. There were no disputes as to the facts in the case, leaving Brooks to make a summary judgment, according to court records.

The plaintiffs argued that the six-person limit, for example, sometimes prohibited a single person who is proficient in English from helping all the members of his family vote. The suit also pointed out that some voters who attained fluent use of English as a spoken language were not always able to read election literature and needed help.

The federal Voting Rights Act gave the choice of translator to the voter, the plaintiffs argued. Brooks agreed.

The state's defense argued that the plaintiffs lacked legal standing, and the six-person limit wasn't a violation of the federal law.

Arkansas Code 7-5-310(b)(4)(B) added the restriction that no one "other than poll workers shall assist more than six voters in marking and casting a ballot at an election." This became law under Act 658 of 2009, a bill brought by then-Sen. Steve Faris, D-Malvern.

The shortage of poll workers fluent in Spanish and other languages limited the help non-English proficient voters could get, the lawsuit claimed.

Brooks ruled that "in Arkansas, if the person of a voter's choice had already assisted six voters, the voter could not be assisted by that person, and the voter would not be getting the assistor of their choice." This clearly violates the Voting Rights Act, he ruled.

The state argued that the purpose of the six-voter limit was to prevent translators and others rendering assistance from unduly influencing voters' decisions in the voting booth.

"In the state defendants' view, absent the six-voter limit, 'busloads of people' could come to the polls and be fraudulently assisted by the same individual," as Brooks summarized the argument.

The defendants argued that the six-voter limit only presented a problem "in a 'far-fetched' and 'implausible situation where more than six voters chose one-and-the-same person to be their only trusted assistant,'" Brooks ruled. "That scenario is far from 'implausible.' Take, for example, a family where a teenage child is fluent in English, but her parents, older siblings and grandparents are not."

The defendants argued that the limit was needed to ensure election integrity, fight voter fraud and ease burdens on poll workers. "The state defendants fail to cite any authority carving out an exception to the supremacy clause" of the U.S. Constitution, which holds that federal law trumps state law when they conflict, Brooks ruled.

The now-stricken state law was enforced by requiring anyone assisting a voter to provide poll workers with his or her name and address, and the names of each voter assisted. Brooks did not strike down this provision to keep track of who is rendering assistance.

The staff had planned to make 115,563 calls to encourage voters to go to the polls on election day and planned to staff a hotline to answer election-related questions.

"The organization completed only 76,166 dials of the 115,563 dials required by the terms of its grant" it received to pay for the effort, Brooks said in his opinion.

Read the ruling at: nwaonline.com/823ruling/

Read the court’s opinion at: nwaonline.com/823opinion/