TELEVISION: Six things you need to know about She-Hulk 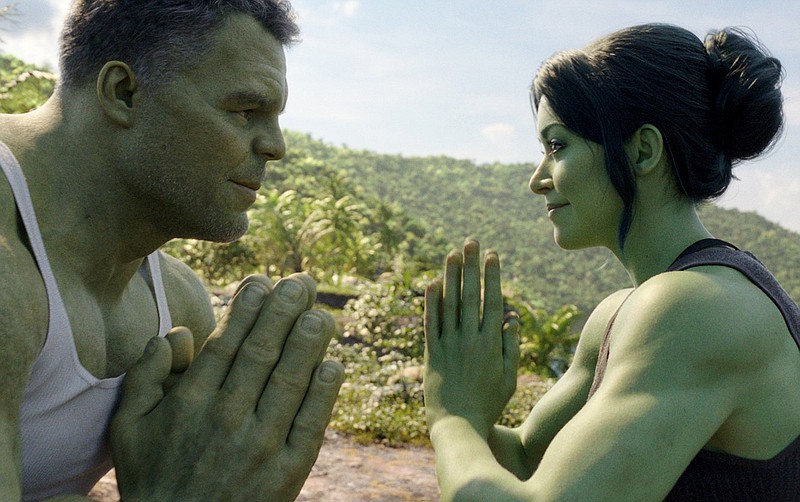 Hulk (Mark Ruffalo) and She-Hulk (Tatiana Maslany) take a moment to explore what it means to be green. (Marvel Studios/Disney Plus)

Hulking out hasn't been all it could be during the past couple decades onscreen, but that's all changed with the debut Thursday of "She-Hulk: Attorney at Law" on Disney Plus.

Eric Bana played the title role in Ang Lee's 2003 film "Hulk," which got mixed reviews — before the Marvel Cinematic Universe started and the role was passed to Ed Norton in 2008's "The Incredible Hulk."

In the infancy of the MCU, the Hulk was expected to be a major player. But after reportedly experiencing creative differences with Norton, Marvel Studios recast the role with Mark Ruffalo. His Hulk/Bruce Banner was relegated to guest appearances in Avengers movies, while Iron Man and Captain America racked up three solo films and Thor got four.

Why no solo Hulk movies? The rights to the character are still tied up in very dramatic red tape over at Universal, and Ruffalo has gone on the record saying the movie studio isn't interested in collaborating with Marvel Studios the way Sony/Columbia has shared Spider-Man.

Which brings us to "She-Hulk." The new Marvel Studios franchise will have a lot more gamma-radiated flexibility to do as it pleases with its jolly green giant and, you guessed it, will also feature a guest appearance from Ruffalo's Hulk.

Here are six things to know before watching "She-Hulk" on Disney Plus.

1. She-Hulk is the alter ego of a lawyer who is Bruce Banner's cousin.

The series stars Tatiana Maslany as Jennifer Walters, a Los Angeles-based lawyer. A fateful and unplanned transfer of blood between her and her cousin, Banner, after an accident causes Walters to also transform into a much larger, super-strong, green version of herself.

2. She began at Marvel Comics but with a television twist.

She-Hulk made her Marvel Comics debut in 1980, appearing in "The Savage She-Hulk" No. 1. The character was created by Stan Lee and John Buscema in part because of the popularity of the CBS "The Incredible Hulk" series starring Bill Bixby and Lou Ferrigno. Marvel Comics worried that CBS and Universal would create a female version of the Hulk character and that the publisher wouldn't own the rights — so it created its own. She-Hulk's origin story in the comics varies slightly from in the TV series but does involve plenty of Hulk blood.

3. She-Hulk is more in control of herself than is the Hulk.

The MCU's Hulk is currently a smart Hulk. Bruce Banner has found a way to combine his brilliant scientific mind with the Hulk's superhuman strength — we see him as very much still Bruce Banner even though he is big and green. There's no going back to being a "puny human," other than in the series' pilot episode while he recuperates from an injury. That's a stark contrast from the Hulk's original days of switching from Banner to an uncontrollable monster that he tries to keep inside.

She-Hulk still changes from Walters to her green Hulk self and back again, but not only loses none of her intelligence or humanity when she does it, she can control on demand when it happens. The original Hulk was a constant threat to society. She-Hulk is an instant social media celebrity and a superhero sex symbol. Walters will wrestle with a public that has high demand for her green persona and will wonder whether her true self can ever compete.

4. She likes to talk to the audience.

There have been many comic book iterations over the years of She-Hulk breaking the fourth wall and talking to her readers, and she'll do the same with the audience in the new series — producing some of its funnier moments.

5. She's not an Avenger now, but membership seems likely.

In the comics she has been an Avenger and a member of the Fantastic Four. In "She-Hulk" she has superpowers but has no interest in giving up the "normal" parts of her life to become a superhero on demand, which the Avengers have to do. That includes dating, hanging out with friends and continuing to be a lawyer.

But this is the MCU. And last month Marvel Studios revealed at San Diego Comic Con that two Avengers movies — "Avengers: The Kang Dynasty" and "Avengers: Secret Wars" — will arrive in theaters in 2025. "Secret Wars," if even remotely based on the multiple comic book events of the same name, will be an all-hands-on-deck event. If ever there were an Avengers movie for the She-Hulk, it would be that one. But for now, she's a solo Hulk.

6. Watching "The Incredible Hulk" with Ed Norton isn't necessary, but it helps.

You don't have to watch what is probably the final solo Incredible Hulk movie in our lifetimes to understand what is going on in "She-Hulk," but events from that movie are referenced. Walters' first super-powered client is none other than Emil Blonsky/The Abomination, played by Tim Roth, resuming his role as the villain (or is he reformed?). If you'd like to do a deep dive into how Blonsky becomes the Abomination and watch him transform into a monster that can get into a fistfight with the original MCU Hulk, then it would be worth a watch.