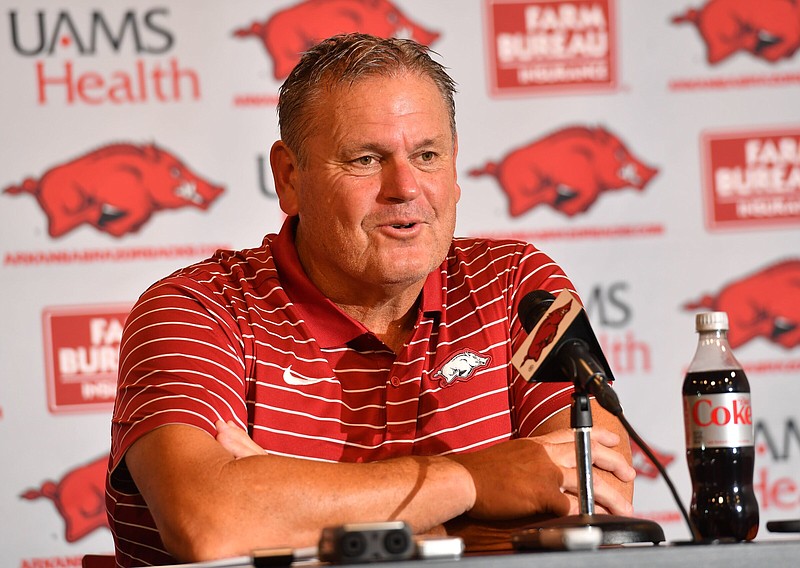 FAYETTEVILLE -- Sam Pittman will face another of his former teams as the University of Arkansas coach when the Razorbacks open the season against Cincinnati on Sept. 3.

Cincinnati will be the fourth former team Pittman has faced in 24 games since he became Arkansas' coach for the 2020 season.

It also will be his sixth game leading the Razorbacks against a team for which he previously was the offensive line coach along with Georgia (twice), Missouri (twice) and Tennessee.

"If you coached at every other school in the world, eventually you've got to play them," Pittman said Wednesday when he spoke at the Hawgs Illustrated Sports Club luncheon at the Hilton Garden Inn. "A lot of firings."

Pittman coached offensive tackles and tight ends at Cincinnati in 1996.

It was Pittman's seventh of what has become 17 coaching stops that began in 1984 when he was a student assistant to the head coach at Pittsburg (Kan.) State, where he played on the defensive lineman.

Rick Minter, a Henderson State University graduate who was a graduate assistant for the Reddies in 1977 and at Arkansas in 1978, was Cincinnati's coach from 1994-2003 and added Pittman to his staff.

Harbaugh, who has been the Baltimore Ravens' coach since 2008 and led them to a Super Bowl championship in 2012, was Cincinnati's special teams coordinator in 2006.

Dameron, a Rogers native who was a college head coach at Eastern Illinois and is now at Fort Smith Southside High School, was Cincinnati's defensive backs coach.

"A lot of really famous and quality coaches -- and then me," Pittman said, drawing laughter from the crowd. "A lot of firings."

Pittman, the offensive line coach at Northern Illinois from 1994-95, found himself looking for a new job after Huskies Coach Charlie Sadler was fired along with his assistants after the team finished 3-8 in 1995.

As Pittman told the crowd Wednesday, his wife, Jamie, was not a fan of the idea of living in Cincinnati.

"My wife did not want to go to Cincinnati -- too big of a place," Pittman said. "And I looked in an atlas -- you remember when there was an atlas? -- and Cincinnati at that time, and I don't know if it still is, the population was smaller than Tulsa.

"So I did a psychology type deal with my wife and said, 'Would you go to Tulsa?' She said, 'Oh yeah, do they have a job open?'

"I said, 'No, but it's a bigger town than Cincinnati.' It wasn't like there were a lot of choices. It was Cincinnati or unemployment."

Pittman helped Cincinnati go 6-5 in his only season there, then left for Oklahoma -- which will be an SEC rival for Arkansas by 2025 if not earlier -- where he was the offensive line coach in 1997-98 before John Blake was fired as the Sooners' coach.

That forced the Pittmans to move again to Western Michigan for a season before moving on to Missouri in 2000, then to Kansas in 2001.

Pittman, the Razorbacks' offensive line coach from 2013-15 before holding the same position at Georgia from 216-19, likely will finish his career as Arkansas' coach.

It was announced on June 2 that Pittman, 60, signed a contract extension at Arkansas through the 2026 season with a raise of his base salary to $5 million.

Pittman earned the new contract after the Razorbacks finished 9-4 last season, capped by a 24-10 victory over Penn State in the Outback Bowl.

"I'm really proud of what we accomplished last year," Pittman said. "I was very fortunate to be awarded a new contract.

"And the contract is important, obviously for several reasons. But the main reason it's important is because it will allow us to build stability for our program.

"I know it was a lot of money, and I get all that, but the main part of that was we could have stability in our program for the kids, for recruiting, for our staff."

Fountain and Walker followed Pittman from Georgia, while Odom was Missouri's head coach for four seasons before coming to Arkansas.

"As you guys well know, we've got some of the finest coordinators in football on our staff," Pittman told the crowd Wednesday. "I'm talking about offense, defense and special teams. We also have an outstanding strength coach.

"We've been very fortunate going into our third year that we haven't had to change that. That's a big deal.

"You've seen it happen to several national championship teams, where they lose both their coordinators or whatever and two years, three years later the [head coach is] unemployed and the team's under .500."

Pittman didn't name any teams, but Ed Orgeron, a former Arkansas graduate assistant, resigned as LSU's coach under pressure effective the end last season after leading the Tigers to a 15-0 record and the 2019 national championship.

The Tigers were a combined 11-12 the past two seasons.

Pittman also didn't mention Auburn or Gene Chizik, who was fired after the Tigers finished 3-9 -- including 0-8 in the SEC -- in 2012 after winning the 2010 national championship.

"I don't want that to happen," Pittman said of Arkansas falling off. "I'm not talking about the firing part. I don't want to lose our coordinators. I do if they get head coaching jobs.

"But they've proven that they love the state. They love you [the fans], they love the players and therefore we're able to keep them."

Pittman thanked the fans who have donated to the program for helping Arkansas retain its coordinators.

"A lot that probably has something to do with some of y'all in the room [donating] financially, because you're not going to keep them patting them on the back," Pittman said. "You've got to come up with the money."

The Razorbacks are ranked No. 19 in The Associated Press preseason poll, while Cincinnati is ranked No. 23 coming off a 13-1 season that ended with a 27-6 loss to Alabama in a College Football Playoff semifinal game.

Cincinnati, which plays in the American Athletic Conference but will move to the Big 12 for the 2023 season, became the first team from a non-Power 5 conference to make the playoff since it was established for the 2014 season.

Luke Fickell, going into his sixth season as Cincinnati's coach, has led the Bearcats to a 48-15 record, including 44-7 since 2018.

"The scary part about them is they're a lot like us," Pittman said. "They're a trying-to-earn respect football program."