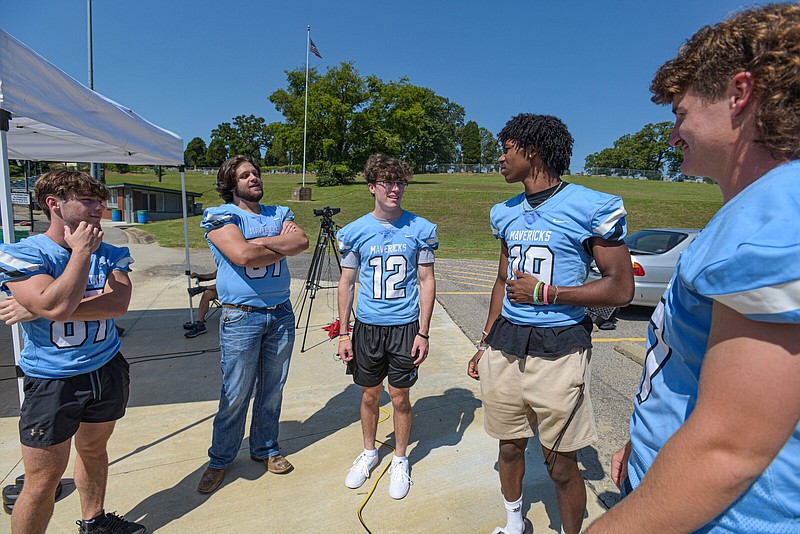 Fort Smith Southside players gather for a photo opportunity at the River Valley Media Day at Hunt’s Park in Fort Smith. The Mavericks will open the season against crosstown rival Fort Smith Northside on Friday at Mayo-Thompson Stadium in the annual Battle of Rogers Avenue. (NWA Democrat-Gazette/Hank Layton)

That's what happens when the dad is a local legend.

"Sometimes, he'll have a real cool story," Castling said. "Sometimes, him and his friends will be talking and catch up, and they'll have some crazy story."

Some sons would wither in the expectations or get lost in the large shadow overhead.

"I love listening to the stories," Kage Castling said. "They get me hyped up, too."

Castling wants to take the momentum of a 52-51 win over Springdale in the final regular-season game last year into this season.

"That game was a lot of fun," Castling said. "We hope to do that a lot more this season."

It was a mentally and physically exhausting one for the Mavericks.

"Coming off the field all of that left my mind," Castling said. "I was just happy to win. That was the most fun part was winning."

The Mavericks focused on what it takes to win those types of games again this season.

"Competing is going to be a big factor for us and how we play," Castling said. "We can't get down, and we have to stay hyped and finish. I'm really focused on having a good senior year and having fun."

Castling will highlight a high quality of line play on both the offensive and defensive lines when Southside travels to Northside for the 62nd meeting of the crosstown rivals.

Senior Erik Barrientos is one of Northside's returning offensive lineman.

"We don't have as much depth as we'd like but we have basically four returning starters," Barrientos. "We're going to be alright up front."

"The expectations as they should be is a state championship," Barrientos said. "We've got to be more disciplined to get to that level."

Last year, Northside pounded opposing defenses with a punishing run game that racked up 2,963 yards on the ground.

"It feels good when the D-line starts putting their heads down and their hands on their knees gasping for air," Barrientos said. "We've been conditioning and trying to get better. We're getting those young guys work to get some more depth."

Coaches brought each player in this year for evaluation sessions prior to fall camp.

"The coaches told us our positives and negatives," Barrientos said. "They said I need to be more physical up front."

Northside will try on Friday to keep its six-game winning streak going over their neighbors from Southside.

Senior Pum Savoy emerged as the starting quarterback for the Grizzlies for Friday night's rivalry game against Southside.

"Pum has been poised the whole time," Northside coach Felix Curry said. "McLane still has a great upside, but Savoy has showed the calm demeanor which we need."

Savoy started on defense last year in the secondary and was a playmaker with four interceptions.

Savoy took all of the snaps in the scrimmage game last week against Bentonville West.

Return of the Bone

Offense, defense and special teams carried the Airedales to a 27-7 win over Van Buren in the Battle of the Bone on Tuesday night.

"We just felt like we an advantage on the edge with it," Alma special teams coach and Lavaca native Payton Morris said. "It's a credit to the guys. They worked hard at it all week. We put them in situations where they could play fast, and they did it when we asked them to."

Junior Carlos Gonzalez partially blocked, getting a hand on the kick, a first-quarter punt that resulted in a 12-yard punt which rolled to the 20. On the next play, Joe Trusty hit Drake Stogsdill for a touchdown.

In the third quarter, Gonzalez completely blocked another punt, which Dillon Flannigan recovered at the 16.

"They were on the same side all night," Morris said. "We were using those two to attack the edge. They did a good job."

Six plays later, Trusty scored on a 1-yard touchdown run for a 20-7 cushion.

In the second half, Alma's offense scored three unanswered touchdowns keyed by the running of Gonzalez, who had 92 of his game-high 113 rushing yards in the second half to wipe out a 7-6 halftime deficit.

"We just kept doing what we were doing," Gonzalez said. "We worked hard for this."

Alma defense was dominant over the final three quarters. Van Buren took the first four minutes, 25 seconds off the clock with a nine-play, 74-yard drive to capture a quick 7-0 lead.

Alma held the Pointers to just 155 yards and nine first downs over their final 10 possessions.

"That drive was a learning experience for us, figuring everything out," Flannigan said. "Once we got it figured out, we were able to shut them down."

Flannigan finished with 10 tackles, including eight solo stops, with four tackles for lost yardage, a sack and the recovery of the blocked punt.

Flannigan also figured in on offense as a blocking back along with Reagan Birchfield on first and goal at Van Buren's 4 on Trusty's 4-yard scoring run that put the Airedales up for good at 13-7.

"We have two fullbacks in that set," Flannigan said. "Our assignment is to take most dangerous and get Joe in the end zone. It was amazing to feel that and have that energy in the second half."

The Bulldogs will face some really good quarterbacks this season and the gauntlet starts quickly with their trip to Stillwater, Okla., on Friday.

Gage Gundy, the youngest son of Oklahoma State head coach Mike Gundy, will be a two-year starter for Stillwater and figures to be one of the best quarterbacks on Greenwood's schedule.

"We've seen them a few games on film last year against Bixby," Greenwood coach Chris Young said. "We went and watched them play 7-on-7 at Shiloh Christian. They beat Owasso, and Jenks, and Bentonville. I'm sitting there wondering why I scheduled these guys. It will be fun. It's fun to play great football teams. That's what we like. It's what our fans like. It's a long road trip but hopefully it will be the start of a series that we keep going for a long time."

Gundy threw for 1,530 yards and 19 touchdowns in leading Stillwater to the semifinals last year while also rushing for 476 yards and eight scores.

"We watched him play but the thing I noticed is he got better every game," Young said. "The longer the day went, the better he got. He's a returning starter from a good team. The experience he has with his dad. He's probably going to help him out a little bit. Mike was at that tournament. I was impressed with that. You see a Division-I head coach at that level at his son's 7-on-7 tournament, you don't see that all the time. I think his priorities are right.

It begins a two-week nonconference schedule that includes Northside next week that will prepare Greenwood for an eight-game 6A-West slate.

"We play those guys early in the year because they're going to show us where we need to improve," Young said. "They're going to show us what we need to do to get better. We want to win our first game and our second game, but more importantly we want to win our last game. If we can learn something about ourselves as a football team by playing great teams early on that's going to benefit us in the long run."