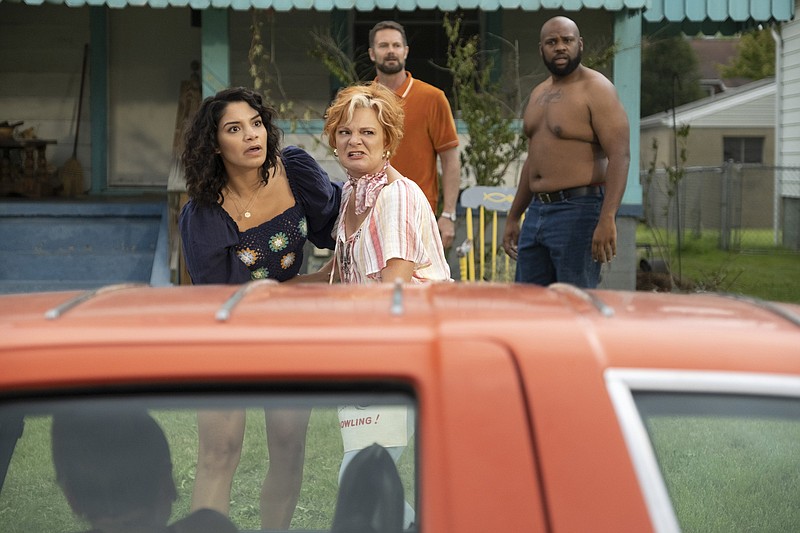 Anyone going into "Sprung" with no idea who created it will probably be able to determine within minutes that they're watching a Greg Garcia joint.

Like many auteurs, Garcia has established a distinctive brand for himself thanks to his previous work on shows like "My Name Is Earl" and "Raising Hope." Garcia has a knack for helming comedies that don't shy away from dramatic beats, have stories centered around a group of lovable misfits and, most importantly, make viewers laugh with and feel for its characters in equal measure.

"Sprung," Garcia's latest sitcom, premiered the initial two installments of its nine-episode first season Aug. 19 on Amazon Freevee. Production on that show took place throughout western Pennsylvania last summer and fall, and it also happens to mark a reunion between Garcia and "Raising Hope" stars Garret Dillahunt and Martha Plimpton.

It comes complete with all the hallmarks of a Garcia-created project with an added twist of a story that picks up right at the beginning of the covid-19 pandemic. While some of the humor is dated and the season overall a little uneven, "Sprung" is a show with a giant heart and some clever plotting that make for a generally satisfying season of television.

The story kicks off with low-level prisoners Jack (Dillahunt), Rooster (Phillip Garcia) and Gloria (Shakira Barrera) being set free early due to covid. Jack and Gloria have nowhere to go, so they end up staying with Rooster and his mother, Barb (Plimpton). It doesn't take long for Gloria to realize that Jack is the prison boyfriend she has been communicating with through a toilet — although he's nothing like how he described himself.

Jack's three new roommates eventually convince him to join their budding criminal enterprise, but only on the condition that they target ne'er-do-wells who have been exploiting the pandemic for personal gain. As they begin formulating a plan to take down corrupt politician Paula Tackleberry (Kate Walsh), these unlikely allies begin to form a makeshift family.

Again, "Sprung" is unmistakably a Greg Garcia venture. It has a lot in common with "My Name Is Earl," especially their breezy tones and shared focus on regular folks trying to make the world a better place through questionably motivated acts of charity. "Sprung" is essentially what would happen if Robin Hood and his Merry Men were a bunch of weirdos living in pandemic-era Maryland.

Unlike Season 2 of HBO's "Industry," which weaved covid into its narrative for dramatic effect, "Sprung" is all about mining whatever comedy could be derived from that fraught time period. While it never feels like the show is making light of the many, many tragedies covid has wrought, the idea of laughing at anything pandemic-related may justifiably be too much for some. Viewer discretion is advised on that front.

There are some chuckles to be had with jokes involving early pandemic phenomena like toilet-paper hoarding and a certain president suggesting that ingesting bleach could be helpful. The more character-based humor tends to be stronger, though, thanks to the performances and Garcia's writing chops.

Even if the comedy doesn't do it for you, "Sprung" also doubles as a heist show — think "Ocean's Eleven" but perpetrated by well-meaning but bumbling petty criminals. Every character brings something useful to the table and ends up playing an important role in the wrongs Jack decides to right. The capers in "Sprung" are a lot of fun and edited in slick ways to show how the heck this motley crew was able to pull them off.

While it's clear a lot of thought and effort was put into the sitcom and crime elements of the show, not everything always meshes together smoothly. The instances when both sides are working in harmony, though, make for some genuinely pleasurable TV.

Dillahunt brings a childlike wonder to Jack, who is being released into the world after spending most of his adult life behind bars. He and Barrera's Gloria form a real bond despite her initial feelings of betrayal. She is just as competent as Jack but more worldly, which proves valuable on multiple occasions.

If Gloria and Jack are the brains of the operation, Phillip Garcia's Rooster is the heart. He's constantly getting himself into trouble, but Garcia imbues him with enough earnestness that viewers never forget his pratfalls are motivated by love and loyalty. Rounding out the main four is Plimpton, who brings her dependably impeccable comic timing to the one-liner devouring Barb. She's a firecracker who ignites every scene she's in with a little something extra.

Like most of Greg Garcia's work, "Sprung" is a pleasant, easy watch that shines a spotlight on the lower middle-class types Hollywood usually wouldn't feature this prominently. If you can get past some disjointed storytelling and the pandemic of it all, you'll almost certainly be in for a good time.