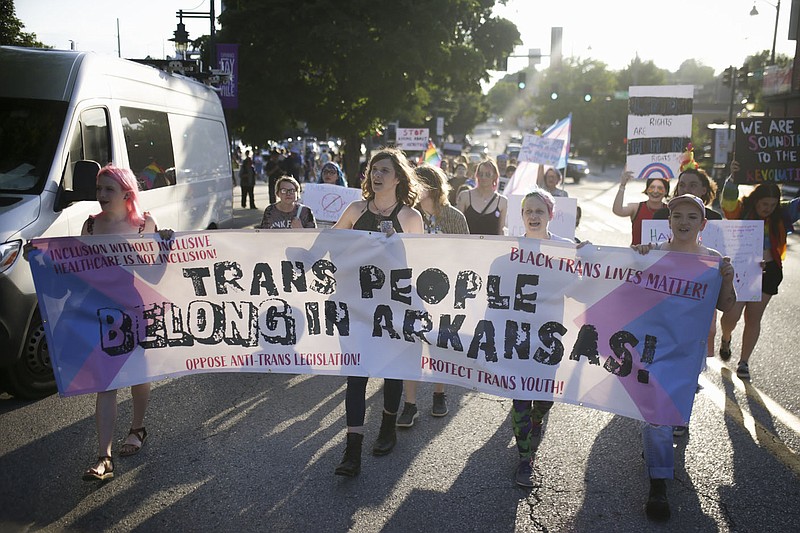 Attendees hold up banners and signs during a trans rights march that started at the Walton Arts Center and ended at the Town Center Plaza in downtown Fayetteville in this June 24, 2021, file photo. (NWA Democrat-Gazette/Charlie Kaijo)

The American Civil Liberties Union brought the lawsuit on behalf of four transgender youths, their parents and two Arkansas doctors.

"Today, the Eighth Circuit Court of Appeals affirmed that no child should be denied medical care they need," said Holly Dickson, ACLU of Arkansas executive director. "We are relieved for trans youth. Research shows that denying gender-affirming care to transgender youth contributes to depression, isolation, eating disorders, self-harm and suicide. Transgender people deserve the right to live healthy lives without fear and discrimination. It's time for the Arkansas Legislature to protect trans kids, not target them."

U.S. Sen. Tom Cotton, R-Ark., also issued a statement after Thursday's ruling: "Our legislature voted to protect kids from experimental drugs and surgeries that could permanently damage their health and well-being. By blocking this law again, the court has kept the fate of Arkansas's children in the hands of liberal activists who support 'sex-changes' for children."

Arkansas moved to dismiss the complaint pursuant to Federal Rules of Civil Procedure 12(b)(1) and 12(b)(6) -- lack of subject-matter jurisdiction and failure to state a claim upon which relief can be granted -- but after a hearing on the motions, Moody denied the motion to dismiss and granted the plaintiffs' motion for preliminary injunction, concluding that they had standing and showed a likelihood of success on the merits of each of their claims and a likelihood of irreparable harm.

A bench trial before Moody is scheduled in federal court in Little Rock for sometime the week of Oct. 17.

On April 6, 2021, the Arkansas Legislature overrode the governor's veto and enacted Act 626.

It was the "first ever bill passed in the United States to outlaw any gender-affirming medical treatment for persons under eighteen years of age," according to the Encyclopedia of Arkansas.

Act 626 prohibits "gender transition procedures," which are defined as procedures or medications that are intended to change "the individual's biological sex," according to the Appeals Court ruling, citing Arkansas Code Annotated § 20-9-1501(6)(A).

The statute defines "biological sex" as the person's sex "at birth, without regard to an individual's psychological, chosen, or subjective experience of gender."

"Thus, under the Act, medical procedures that are permitted for a minor of one sex are prohibited for a minor of another sex," according to the Appeals Court. "A minor born as a male may be prescribed testosterone or have breast tissue surgically removed, for example, but a minor born as a female is not permitted to seek the same medical treatment. Because the minor's sex at birth determines whether or not the minor can receive certain types of medical care under the law, Act 626 discriminates on the basis of sex. Arkansas's characterization of the Act as creating a distinction on the basis of medical procedure rather than sex is unpersuasive."

The district court found that the act prohibits medical treatment that conforms with "the recognized standard of care for adolescent gender dysphoria," that such treatment "is supported by medical evidence that has been subject to rigorous study," and that the purpose of the act is "not to ban a treatment [but] to ban an outcome that the State deems undesirable."

"The record at this stage provides substantial evidence to support these factual findings," according to the appeals court.

"In sum, having reviewed the evidence as a whole, we are not left with the 'definite and firm conviction' that the district court's factual findings are clearly erroneous," according to Thursday's ruling. "Rather, substantial evidence in the record supports its factual findings. In light of those findings, the district court did not err in concluding Act 626 is not substantially related to Arkansas's interests in protecting children from experimental medical treatment and regulating medical ethics, and Plaintiffs have demonstrated a likelihood of success on the merits of their equal protection claim."

"In considering the risk of irreparable harm to the Plaintiffs, the district court found that if Act 626 went into effect, Minor Plaintiffs would be denied access to hormone treatment (including needing to stop treatment already underway), undergo endogenous puberty -- a process that cannot be reversed -- and suffer heightened gender dysphoria," according to the Appeals Court ruling. "These factual findings are supported by Minor Plaintiffs' affidavits and are not clearly erroneous. The findings support the conclusion that Plaintiffs will suffer irreparable harm absent a preliminary injunction.

"Additionally, it is 'always in the public interest to prevent the violation of a party's constitutional rights,'" according to the Appeals Court, citing case law. "These interests, weighed against the potential harm to Arkansas of not enforcing Act 626 between now and a final ruling on the merits of the litigation, convince us that the district court did not abuse its discretion in granting Plaintiffs' motion for preliminary injunction."