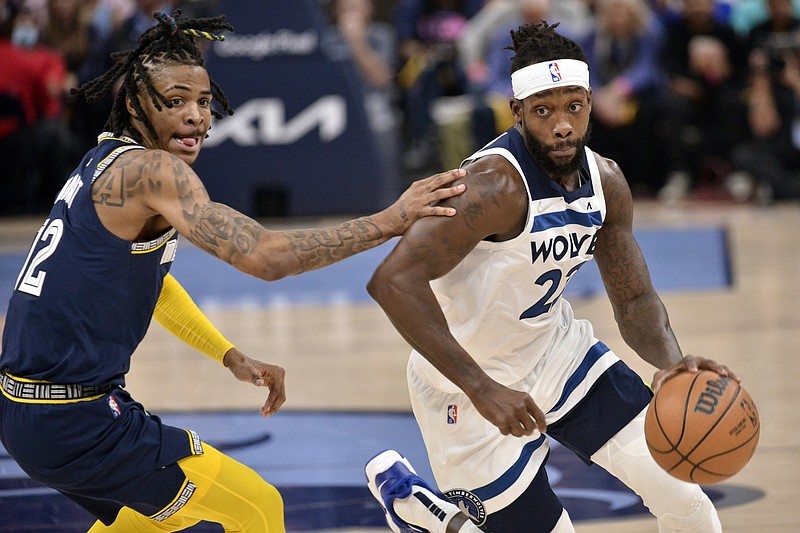 FILE - Minnesota Timberwolves guard Patrick Beverley, right, controls the ball against Memphis Grizzlies guard Ja Morant, left, in the second half during Game 5 of a first-round NBA basketball playoff series April 26, 2022, in Memphis, Tenn. The Los Angeles Lakers have traded for Beverley. The move sends guard Talen Horton-Tucker and forward Stanley Johnson to the Utah Jazz and returns Beverley to the city where he starred for the Clippers from 2017 until last year. (AP Photo/Brandon Dill, File)

Patrick Beverley is returning to Los Angeles, this time joining LeBron James and the Lakers. A fan favorite when he played for the Clippers, Beverley was acquired from the Utah Jazz on Thursday in exchange for guard Talen Horton-Tucker and forward Stanley Johnson. "Woke up a Laker!!! Its On!!!" Beverley (Arkansas Razorbacks) wrote in a Tweet that included purple and gold heart emojis. He averaged 9.2 points, 4.1 rebounds and 4.6 assists for Minnesota last season while starting 54 of 58 games and helping the Timberwolves make the playoffs. He ended up in Utah as part of a multi-player deal when the Jazz sent Rudy Gobert to Minnesota in early July. The 34-year-old guard from Chicago is known for his ferocious defense that makes him popular with home crowds and a thorn to opposing players. The three-time NBA All-Defensive team member played for the Clippers from 2017-21 until he was traded to Memphis and then to the Wolves nine days later. Beverley played for Houston from 2012-17.

John Jenkins scored 22 points on 8-for-9 shooting and the U.S. had little trouble on the way to a 105-71 victory over Uruguay in a World Cup Americas Region qualifying game in Las Vegas. The win, combined with Puerto Rico's win over Brazil in another qualifier Thursday, put the Americans alone atop of their qualifying group. Langston Galloway added 18 points for the Americans, who are likely now just two wins away from qualifying for next year's World Cup. The U.S. (6-1 in qualifying) outscored Uruguay 33-13 in the second quarter to take control, that burst fueled by making three-pointers on four consecutive possessions. The outcome was never in doubt again.

Kurt Busch will miss the start of NASCAR's playoffs with concussion-like symptoms that have sidelined him six for weeks, meaning two spots in the 16-driver field will be open Saturday night in the regular-season finale at Daytona International Speedway. 23XI Racing on Thursday withdrew the medical waiver that was holding Busch's spot in the playoffs. Busch has been out since he crashed in qualifying July 23 at Pocono. Ty Gibbs, the 19-year-old grandson of Joe Gibbs, has replaced Busch since he was injured. Busch earned his spot in the playoffs with a win at Kansas Speedway in May and, had he not been injured, NASCAR's 2004 champion would have participated in the playoffs for a 10th consecutive season. By pulling its medical waiver, 23XI gave some breathing room to fellow Toyota driver Martin Truex Jr., who was battling Ryan Blaney for the final spot in the field.

John Velazquez, already the leading career rider at Saratoga, had his 1,000th winner Thursday at the historic track. The 50-year-old Hall of Fame jockey won the eighth race by a neck aboard Precursory, who paid $14 to win. The filly is trained by fellow Hall of Famer Bill Mott. Some of Velazquez's biggest career moments have occurred at Saratoga. His 64 victories at the 2004 summer meet was a record at the time. On Sept. 9, 2001, he won six races in one day to set a record. On July 27, 2013, he won his 694th race to become the track's winningest jockey.

Frustrated New York Jets wide receiver Denzel Mims has requested to be traded, according to a statement released Thursday by his agent. "It's just time," agent Ron Slavin wrote. "Denzel has tried in good faith, but it is clear he does not have a future with the Jets." Mims, a second-round pick in 2020 out of Baylor, has struggled to find a role with the Jets. He has just 31 catches for 490 yards and no touchdowns in 20 games over two seasons. He dealt with hamstring issues as a rookie, a case of food poisoning that caused him to lose 20 pounds last offseason, a bout with covid-19 last season and saw his role in the offense dwindle to nearly nonexistent.

Phillies pitcher Zack Wheeler was put on the 15-day injured list with right forearm tendinitis Thursday, a move that came three hours after Philadelphia announced slugger Bryce Harper was set to return from a broken thumb. Wheeler, 32, is 11-7 with a 3.07 ERA in 23 starts. The right-hander finished second in the NL Cy Young Award race behind Milwaukee's Corbin Burnes last year after throwing the most innings in the majors at 213 1/3. In his last outing on Saturday, Wheeler hit 97 mph on the radar gun, but struggled with command in 5 1/3 innings. He allowed four runs and threw 106 pitches in an 8-2 loss to the New York Mets, his former team.

Los Angeles Angels first baseman Jared Walsh went on the 60-day injured list on Thursday due to thoracic outlet syndrome on his left side. Walsh has struggled this season offensively, hitting .215 with 15 home runs and 44 RBI in 118 games. Angels head athletic trainer Mike Frostad said before Thursday's game at Tampa Bay that it has not been determined yet if Walsh will require surgery for the season-ending injury. He was first placed on the 10-day IL but was moved to the 60-day IL during the Angels' 8-3 loss to the Rays.

Lingmerth in front in Ohio

Former University of Arkansas golfer David Lingmerth is off to a solid start at the Korn Ferry Tour's Nationwide Children's Hospital Tournament in Columbus, Ohio. Lingmerth, from Tranas, Sweden, fired a 9-under par 62 at the Ohio State University Golf Club Scarlet Course and holds a three-stroke lead after the opening round of play. Aaron Baddeley, Jared Wolfe and Brandon Hagy all turned in scores of 6-under 65. Austin Cook (Jonesboro, Razorbacks) is one of four player at 5-under 66. Zack Fischer (Benton) posted a 3-under 68. Nicolas Echavarria (Razorbacks) struggled with a 6-over 77.

Paula Reto shot a course-record 9-under 62 on Thursday at Ottawa Hunt and Golf Club to take a two-stroke lead in the Canadian Pacific Women's Open. "It's not something I'm familiar with," Reto said about the low score. Winless on the LPGA Tour, the 32-year-old South African opened with a 6-under 29 on the back nine and added three birdies on the front nine -- the last on the par-5 ninth. She birdied all four par-5 holes. Reto broke the course mark of 63 set by Canadian star Brooke Henderson in the third round of the 2017 tournament.

Thriston Lawrence and Alejandro Canizares shot 8-under rounds of 62 to share the lead after the first round of the European Masters in the Swiss Alps on Thursday. Lawrence chipped in for an eagle at his final hole, the par-5 ninth, after six birdies and no bogeys. He's seeking a second title on the European tour this season that started back in November when he won the Joburg Open in his native South Africa. Four players were tied for third, two shots back, in the bright sunshine and thin air at the Crans-sur-Sierre club where the course is covered with ski pistes in the winter. Matt Wallace, Louis de Jager, Eduardo de la Riva and Scott Jamieson all shot a 64. Former University of Central Arkansas golfer Pep Angles shot a 3-over 73.

Green on top at Open

Tammie Green shot a bogey-free 5-under 68 on Thursday to take the first-round lead in the U.S. Senior Women's Open in Kettering, Ohio. The 62-year-old Green, a seven-time winner on the LPGA Tour, had four consecutive birdies on Nos. 13-16 on NCR Country Club's South Course. Catrin Nilsmark and Leta Lindley shot 69. Helen Alfredsson, the 2019 winner, was at 70 with Pat Hurst. Laura Davies, the 2018 champion, shot a 71. Defending champion Annika Sorenstam opened with a 73.