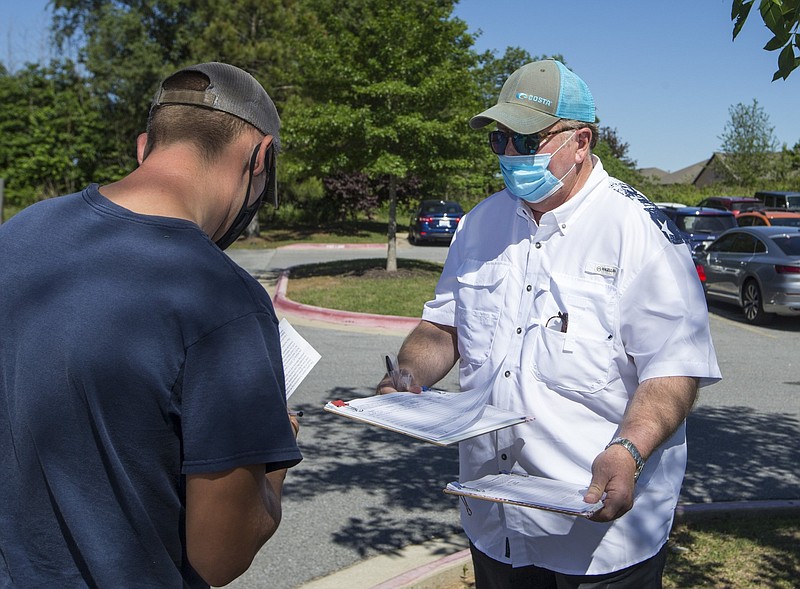 Jonathan Anderson (right) of Tucson, Ariz., takes a signature from David Wallace of Rogers outside the Bentonville Revenue Office in this May 29, 2020 file photo. Anderson was employed by National Ballot Access. (NWA Democrat-Gazette/Ben Goff)

A prosecuting attorney in Russellville said the state's petition fraud law doesn't address the behavior of a person offering canvassers working for a ballot committee money to dispose of signed petitions that they have gathered, so he's proposing's changing state law to address it.

Jeff Phillips, prosecuting attorney in the Fifth Judicial District, acknowledged in a letter to spokesman Han Stiritz of the Fair Play for Arkansas 2022 ballot committee, which promoted a constitutional amendment to ax Pope County as a state-licensed casino site, Stiritz's position that amendment opponents were paying canvassers to "destroy documents in an attempt to frustrate an attempt to put an issue on the ballot."

"When I initially reviewed the evidence and turned it over to my chief deputy, we both felt there had to be a crime committed," he wrote in his letter dated Aug. 18 to Stiritz.

But Phillips said "we came to the conclusion that the petition fraud Statute 5-55-601 is completely silent on this type of behavior," after a through investigation and search.

He said his office has submitted a legislative proposal to the prosecutor coordinator's office for consideration at the next legislative session.

"Basically, we are proposing that Statute 5-55-601 be amended to address the type of behavior," Phillip said in his letter that he released on Thursday to the Arkansas Democrat-Gazette at its request. "We also proposed that an amendment could be passed to allow prosecution for tampering with public records under 5-54-121."

Phillips said his office also looked into a situation where the home of an employee of the Fair Play for Arkansas 2022 burned.

"There was concern that this was not an accidental burning and could possibly be the result of an intentional criminal act," he said.

Phillips said a report by a private company that routinely conducts fire investigations purports to show intentional setting of the fire.

"I reviewed their report and could not see any determining factor that shows this wasn't an accidental fire," he said. "I was not alone in this determination, as the State Police experts both said they were surprised that the investigator came to these definitive conclusions based upon the evidence at the scene," he wrote in his letter to Stiritz.

Phillips said it's clear to him that the owners of the structure did not have any intent to do this, as it is his understanding that they did not have insurance.

"However, I think it is just as likely, if not more so, that this was an accidental fire as opposed to intentionally being set," he wrote.

One of the two requirements to qualify a ballot measure for the ballot is that the state Board of Election Commissioners must certify a proposed ballot measure's popular name and ballot title under state law.

The other requirement is the secretary of state's certification that that the sponsor submitted the required number of valid signatures of registered voters on a petition.

In July, the Fair Play for Arkansas 2022 committee said it submitted 103,096 signatures to the secretary of state.

On Aug. 8, Thurston said the committee failed to submit enough signatures of registered voters to qualify to get 30 more days to collect additional signatures to qualify its proposal for the Nov. 8 ballot.

A ballot committee is required to submit 89,151 valid signatures of registered voters to qualify its proposed constitutional amendment for the Nov. 8 ballot.

Amendment 100 to the Arkansas Constitution -- approved by voters in November 2018 -- authorizes the Arkansas Racing Commission to issue four casino licenses.

The licenses are authorized for expanding gambling operations at Oaklawn Racing and Gaming in Hot Springs and Southland Casino Racing in West Memphis and for casinos in Jefferson and Pope counties with the endorsement of local officials.

The Fair Play for Arkansas 2022 ballot committee has been largely financed by the Choctaw Nation of Oklahoma, according to its campaign finance reports.

The Arkansas Tourism Alliance ballot committee has been financed largely by the Oklahoma-based Cherokee Nation Businesses, according to its campaign finance reports.