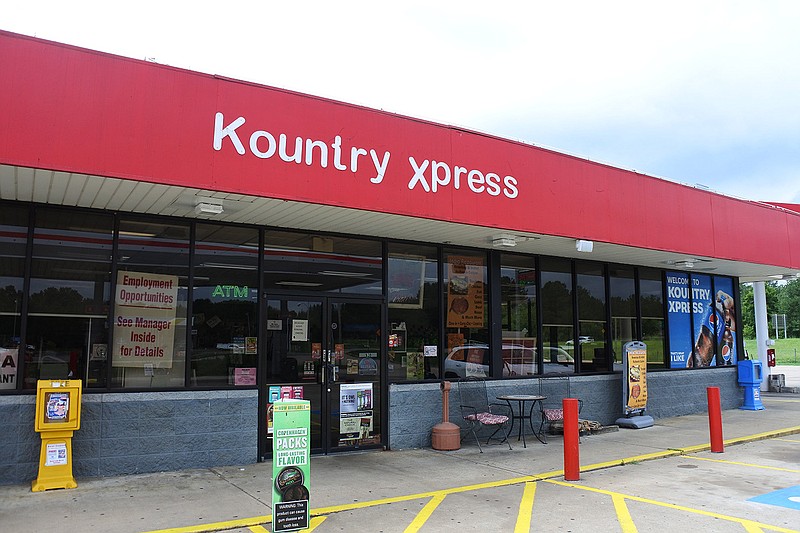 The Kountry Xpress convenience store at 1107 Georgia Ridge Drive in Mulberry as it was on Monday, Aug. 22, 2022. The U.S. Attorney's Office and Civil Rights division of the U.S. Justice Department, along with Arkansas State Police, are investigating after three local law enforcement officers were seen in a video posted to social media holding down and beating a man during an arrest outside the convenience store on Sunday, Aug. 21, 2022. (NWA Democrat-Gazette/Thomas Saccente)

MULBERRY -- A man who was shown being held down and beaten by three law enforcement officers in a video that went viral through social media Sunday has a history of criminal activity, including an assault on a police officer, according to court records.

Crawford County Sheriff Jimmy Damante provided a statement on the events before and after the incident via the sheriff's office Facebook page Thursday afternoon.

County deputies Zack King and Levi White, as well as officer Thell Riddle of the Mulberry Police Department, were shown on video using force while arresting Randall Worcester , 27, of Goose Creek, S.C., about 10:40 a.m. Sunday outside the Kountry Xpress convenience store off Interstate 40 in Mulberry. The video depicted the officers repeatedly punching and kneeing Worcester and slamming his head to the pavement, in addition to telling a bystander to get away from the scene.

Damante said Worcester was reported to have threatened a female employee at Sargent's gas station off Interstate 40 in Alma earlier that morning with a knife. He reportedly then proceeded to spit on the woman and left the scene on a bicycle, according to an incident report from the Alma Police Department, which was dispatched to the gas station at 10:10 a.m. Sunday.

The report states a female clerk told police a man she later identified as Worcester came in and got some water before going to sit outside the store on the south side. He then moved to sit outside the front of the store, prompting the clerk to ask him to leave because he was loitering. Worcester reportedly responded by cursing the clerk and calling her a leech. He also spat on her and threatened to cut her face, according to the report.

Damante said King, White and Riddle encountered Worcester shortly afterward in Mulberry. Worcester, who still had a knife, reportedly gave the officers a false name. Damante said Worcester is a convicted felon who's been charged with, or convicted of, multiple incidents in the past 10 years, including an assault on a police officers.

Damante said Worcester "aggressively tackled" one of the officers trying to arrest him, slamming the officer's head into the concrete and causing a concussion. Worcester also punched the officer on the head.

Damante said the video of the incident shared online didn't include any of this, although some of it was recorded via a vehicle camera.

"The citizen video is troubling to watch, as is often the case when officers are trying to arrest a violent criminal with a history of assaulting police," Damante said. "I understand that many people who have seen the video have concerns about the use of force used."

Russell Wood, an attorney with the Wood Law Firm in Russellville representing White and King, identified White as the deputy Worcester reportedly attacked in a news release Monday.

Worcester was involved in three criminal cases filed in Cleveland County, Okla., according to records provided by the county's District Court clerk's office. That includes one filed in July 2021 in which Worcester pleaded guilty to felony assault and battery on a police officer and misdemeanor obstructing an officer.

Police officers in Oklahoma City responded earlier that month in reference to Worcester attempting to jump in front of vehicles, according to court documents. An officer found Worcester and tried to guide him away from a road and toward his vehicle. However, Worcester hit the officer in the face with a closed fist and ran away.

Before this, Worcester had been sentenced to 120 days in jail in December 2020 on a misdemeanor charge of domestic abuse -- assault and battery, according to court records. Worcester's father told the Norman, Okla., Police Department the previous October that Worcester hit him in the face and arm with his fist while the two were in a vehicle. Worcester's father also saw Worcester wielding a knife. His father said it appeared his son was going to stab him.

Worcester was also sentenced to 30 days in jail after pleading guilty to one misdemeanor charge of possession of a controlled dangerous substance in October 2021, according to records.

The Arkansas State Police is conducting an independent investigation into the use of force.

The U.S. Attorney's Office for the Western District of Arkansas, the Department of Justice and the FBI's field office in Little Rock opened a civil-rights investigation into the incident, according to authorities. King, White and Riddle are suspended with pay.

Damante said he also directed his staff to begin a "thorough, disciplinary investigation" into King's and White's actions that won't interfere with what the other agencies are doing. He will publicly announce any action he takes after the investigation.

"I understand some people are angry," Damante said. "It's OK to be angry. Remember, all of us want the right thing to be done in this matter, but doing the right thing involves following all the right procedures and being transparent about it."

A Freedom of Information Act request seeking reports pertaining to Worcester's arrest, along with body camera footage recorded during the incident, was sent to the sheriff's office and Mulberry Police Department on Monday. The agencies were also asked for all excessive use complaints filed against them during the past 12 months. The sheriff's office was requested to provide any and all recorded phone calls or call records connected with Worcester's arrest as well on Tuesday.

The sheriff's office responded Thursday by stating the camera footage, recorded phone calls, audio records and reports are part of an open and ongoing criminal investigation, meaning they are exempt from the Freedom of Information Act.

Sean Brister, city attorney for Mulberry, similarly said Thursday the city's material regarding this incident are protected from disclosure because they are part of an open investigation. In addition, the Mulberry Police Department doesn't have any responsive records concerning excessive use of force complaints during the past 12 months.