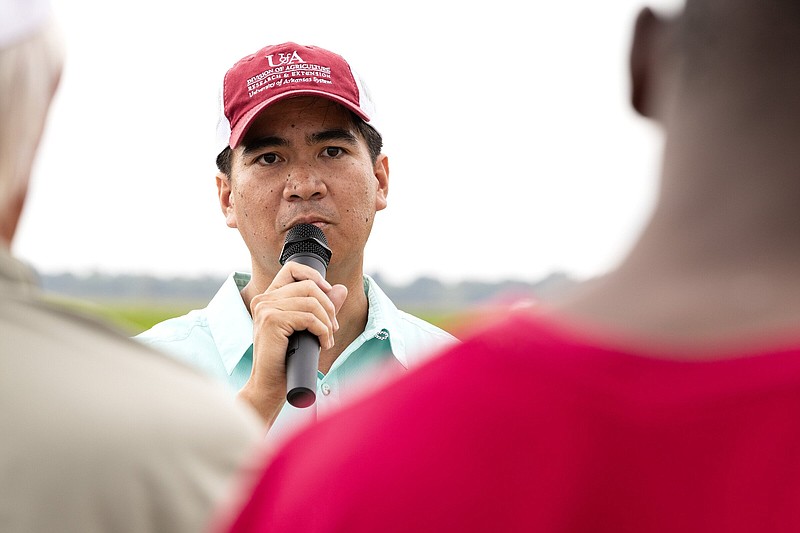 During the University of Arkansas System Division of Agriculture's 2022 Rice Field Day at the Rice Research and Extension Center near Stuttgart on Aug. 5, more than 250 attendees heard from experiment station rice breeders Xueyan Sha and Christian De Guzman.

They discussed developments of several new varieties, like Ozark, a new short-season long-grain, and Taurus, a new high-yielding medium-grain rice. The experiment station is the research arm of the Division of Agriculture.

John Carlin, director of the division's Arkansas Crop Variety Improvement Program, said the aromatic program has started to shift toward breeding for higher quality, and two promising lines in the program will be evaluated for improved quality and agronomy characteristics.

Seed stock for Ozark, the newest Division of Agriculture conventional long-grain, is showing a 10-bushel-per-acre yield advantage over its predecessors, Diamond and LaKast, Sha said. Ozark's consistent yield potential is complemented by its good milling and grain quality and good straw strength, he added.

About 12 acres of Ozark foundation seed were grown at the experiment station this year for an expected release to seed dealers in 2023, Sha said.

Foundation seed for Clearfield varieties CLL16 and CLL18 continues to be grown by the Arkansas Agricultural Experiment Station in collaboration with BASF/Horizon Ag. Both are short-season long-grain varieties, with CLL16 hitting the public market just last year. CLL18 is expected to be publicly available in 2023 through Horizon Ag.

CLL18 was the highest-yielding nonhybrid Clearfield rice in the 2020 and 2021 Arkansas Rice Performance Trials conducted by the Division of Agriculture, averaging 221 bushels of rough rice per acre.

CLL18 has a plant height of 37 inches with grain weight, kernel size and lodging resistance like Diamond, and early maturity similar to CLL15.

CLL16 has a rough rice yield potential like Diamond's at about 205 bushels per acre yield, with low chalk, good milling and the Pi-ta gene for blast resistance, Sha said.

Milling yields for CLL16 averaged 63% whole kernel and 69% total milled rice for samples from Arkansas Rice Performance Trials across the state. CLL16 is a very stable cultivated variety with an early maturity date, averaging 86 days to 50% heading, similar to CL172 and Wells, and about four days earlier than Roy J. The plant is standard height with a 36-inch canopy, similar to Diamond.

Clearfield rice was developed at Louisiana State University from a breeding line of rice with a naturally occurring genetic mutation that was tolerant to the imidazoline family of herbicides.

Taurus is a semi-drawf conventional variety with a 20-bushel per acre yield advantage over its predecessors.

Sha said Taurus was bred for Midsouth conditions and would be adaptable to wherever Jupiter or Titan are grown. A cross between four other conventional varieties, Taurus has a plumper kernel than Jupiter and outshined the latest medium-grain varieties, Lynx and Titan, in the 2021 trials at six locations. Taurus brought in the highest average yield in a Clay County field with 249 bushels per acre.

"The crop so far looks very good," Hardke said Aug. 8. "Despite overall later planting, the heat of the summer moved things along very quickly. Harvest is expected to begin soon as a result, though the bulk of acres still have a few weeks to go before we really get into harvest full swing."

Hardke also noted that while 2022 has been a difficult season and yields will not likely challenge the record yields in 2021, he is still "very optimistic."

"The combines, as always, will tell the story," Hardke said.

John Lovett is with the Arkansas Agricultural Experiment Station, University of Arkansas System Division of Agriculture.