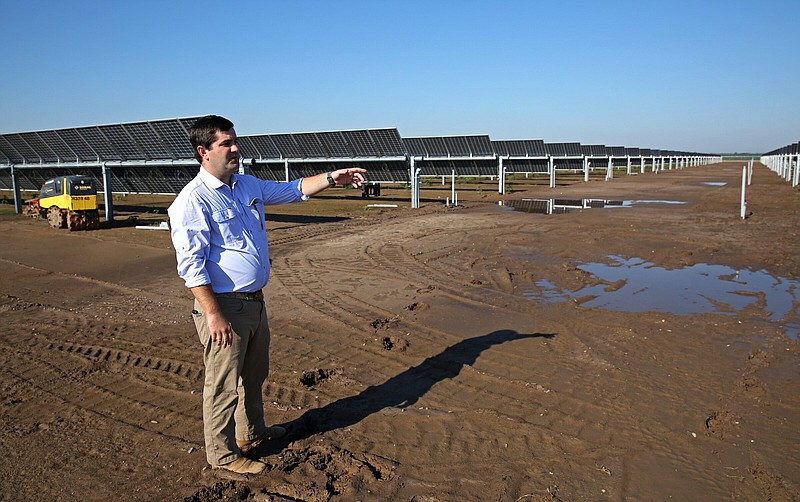 Bearskin Farms east of Little Rock is installing one of the largest solar projects on a farm in Arkansas in a bid to gain some control over the farm's energy costs at a time when solar energy may be more accessible than ever in agriculture.

Renewable energy -- a priority in the recently passed Inflation Reduction Act -- is growing in Arkansas' agriculture sector as more farmers turn to energy sources like solar to power everything from fans in a poultry house to grain drying bins and well pumps.

The act, which was signed into law by President Joe Biden on August 16, is described as an effort to combat climate change evident, scientists say, in the numerous reports of severe and often unpredictable weather that U.S. farmers face.

Bearskin Farm owner Lambert Marshall is installing a 2-megawatt solar array composed of 4,500 panels that will produce about 3.6 million kilowatt hours annually at his farm in Lonoke and Pulaski counties.

Cotton, corn, rice, soybeans and wheat are grown on the farm, and solar energy will be used for irrigation, grain drying and storage of crops.

"Bearskin won't be completely reliant on solar energy; in more rural areas of the farm electric irrigation equipment is not viable," Marshall said.

"We hope to continue to convert more of our irrigation equipment to electric to lessen our environmental impact."

Farming is a capital-intensive business, Marshall said. "Our farm uses a lot of energy producing and drying our crops," he said.

"We think solar with help stabilize and lower our energy costs over time. Bearskin's solar array will have the capability and size to help generate significant savings for the farm."

The USDA announced on Wednesday $121 million in investments to combat climate change in socially vulnerable communities in 49 U.S. states with funding from the Inflation Reduction Act.

North Little Rock-based company Seal Solar is installing the array at Bearskin Farm, and also installs solar power systems for agriculture, residential and other projects across the state.

"The main thing we're seeing is farmers, business owners, and everybody else is just wanting to have control," Seal Solar's co-founder and president Heather Nelson said. "Solar gives farmers the ability to now have control over their electricity costs. It allows them to budget better.

"It allows them to deliver a [return on investment] on something that was just a sunk cost in the past."

Arkansas farmers who produce solar energy can use net metering to offset their electricity costs.

Act 464 of 2019 allows utility customers who generate their own solar energy and produce an excess to send the extra power to their utility for a credit on their bills. The law also raised the limit for commercial customers of electric utilities with solar projects from 300 kilowatts to 1,000 kilowatts.

The state Public Service Commission, which regulates utilities, posted new net-metering rules for solar development on June 1, 2020. The rules allow existing agreements between utilities and non-metering customers to remain or be grandfathered in for 20 years, or until 2040.

Farmers may have multiple meters tied to wells, grain bins, houses, shops or barns and net meter aggregation allows them to build one solar project and tie all their meters together, Nelson said.

Farmers with net metering will get a one-to-one credit for the energy they produce and send to the utility's power grid, which is applied to their monthly electricity bill, Arkansas Advanced Energy Association Executive Director Lauren Waldrip said.

"We design the [solar power] project based on 12-month usage and then once it's constructed, we submit a list of those meters to the utility in the order in which the client would like the energy produced off their solar to offset those accounts," Nelson said.

"They will rank those, and once a year, they're allowed to go back to the utility and change that order."

Retired row crop farmer Tom Jacobs from DeWitt was the first to adopt solar power on a farm in Arkansas.

"The way I looked at it when I put [solar panels] in was -- it was like I was buying my own generator and I was buying a piece of farm equipment," Jacobs said. "I was going to see what my payback on that equipment was. It's been about eight years, and the net amount that I paid for it, well I will have saved that much on energy costs," he said.

Jacobs supplements his electricity with solar energy from 84 panels that generate roughly 25,000 watts to power grain drying bins, a farm shop and a tenant house.

"At the time that we put that in, Entergy was asking for a rate increase ... and this was a way of locking in the rate because we were going to be grandfathered in," Jacobs said.

"Since it was going to be swapped one-for-one, every kilowatt I produced, whether I used it on my farm or it went to my neighbor, then I got credit for that when I needed it during drying season or at one of my other places," Jacobs said, adding this was supposed to cover 70% to 80% of the farm's usage.

It allowed those entities to utilize solar by allowing them to sign lease agreements with third parties that install solar power projects. The state Legislature also passed Act 507 in 2019, which allowed government entities to issue bonds for energy savings projects. School districts may also participate.

This act allowed energy performance contracts to extend past 20 years if the project is guaranteed to last that long and if the project's useful life is more than 20 years.

Poultry growers can use solar to generate electricity to power poultry houses, which use fans to meet cooling requirements for broiler chickens.

Approximately 20.5 million chickens are processed in Arkansas weekly and poultry accounts for 50% of Arkansas's agricultural cash receipts, Childers said. To determine whether solar energy makes sense, Childers said farmers should first determine what energy provider's territory their operation is based in, whether it's Entergy, an electricity cooperative or a municipality.

"We know there are some banks that are providing 100% financing, and I think if all of those line up, to me, it's almost a no-brainer for poultry farmers," Childers said. Waldrip recommended farmers also get multiple quotes from different developers. Farmers may have varying returns in terms of cost savings as well, she said.

Nelson said solar energy will deliver a return on investment for Arkansas farmers.

"When we started doing this years ago, the longest warranty [for solar energy] you ever saw was 25 [years] and now its 30, so the technology is getting better and the warranties are getting longer," Nelson said.

Childers said it may take some time to see a return on investment for solar panel installation costs but as long as farmers generate enough energy for a farm's needs, they will have lower energy costs.

Farmers can utilize land that might be low-yield in terms of crop production for solar panels to offset their utility costs, Nelson said.

Some Arkansas landowners are also engaging with solar energy on larger scale by setting up power purchase agreements.

"Some farmers will sell that power not to a utility necessarily, but maybe to Amazon; we know Amazon has a couple projects set up in eastern Arkansas," Waldrip said.

"That's why aggregation is so important because it doesn't have to be in the same location."

Costs to install solar in the U.S. have dropped by more than 60% over the last ten years, though supply chain and shipping issues related to the pandemic and trade instability led to some price increases, according to the Solar Energy Industries Association.

The Inflation Reduction Act package increases an existing energy investment tax credit to 30% for solar projects, to include projects installed this year, through the end of 2032.

The tax credit is also extended to battery storage technology.

Standalone energy storage systems, such as lithium batteries, are eligible for the 30% tax credit, Nelson said.

"This means if you install a battery-only system, or if you add batteries to your solar [power] system in the future, they will qualify for the 30% tax credit," Nelson said.

There is also an additional 10% tax credit for selling electricity generated by community solar projects to low-income individuals.

There is an additional 10% tax credit for using domestically produced hardware for a project.

"There are ways to get a 40% to 50% solar tax credit for commercial projects," Nelson said. "Such as using American-made components, and locating the project in a low-income community or on a brownfield. Projects over [1 megawatt] must meet additional labor guidelines," she said, emphasizing the company recommends customers refer to tax professionals for verifying tax-related solar concerns.

Nelson said direct pay should also be an option for solar projects commissioned in 2023 for tax-exempt, nonprofit and municipal customers.

"Direct pay means the federal government will reimburse a tax-exempt organization at least 30% of the total cost of the system," Nelson said.

Rural Energy for America Program funding could also see a boost because of the Inflation Reduction Act, Nelson said.

Waldrip said the Act is also expected to promote domestic manufacturing, which could generate millions of jobs in the U.S.

"A lot of these projects are required to use domestically sourced inputs, specifically steel," she said.

"We know that here pretty soon, Mississippi County in northeast Arkansas is going to be the largest steel-producing county in the nation. They will certainly benefit from this." 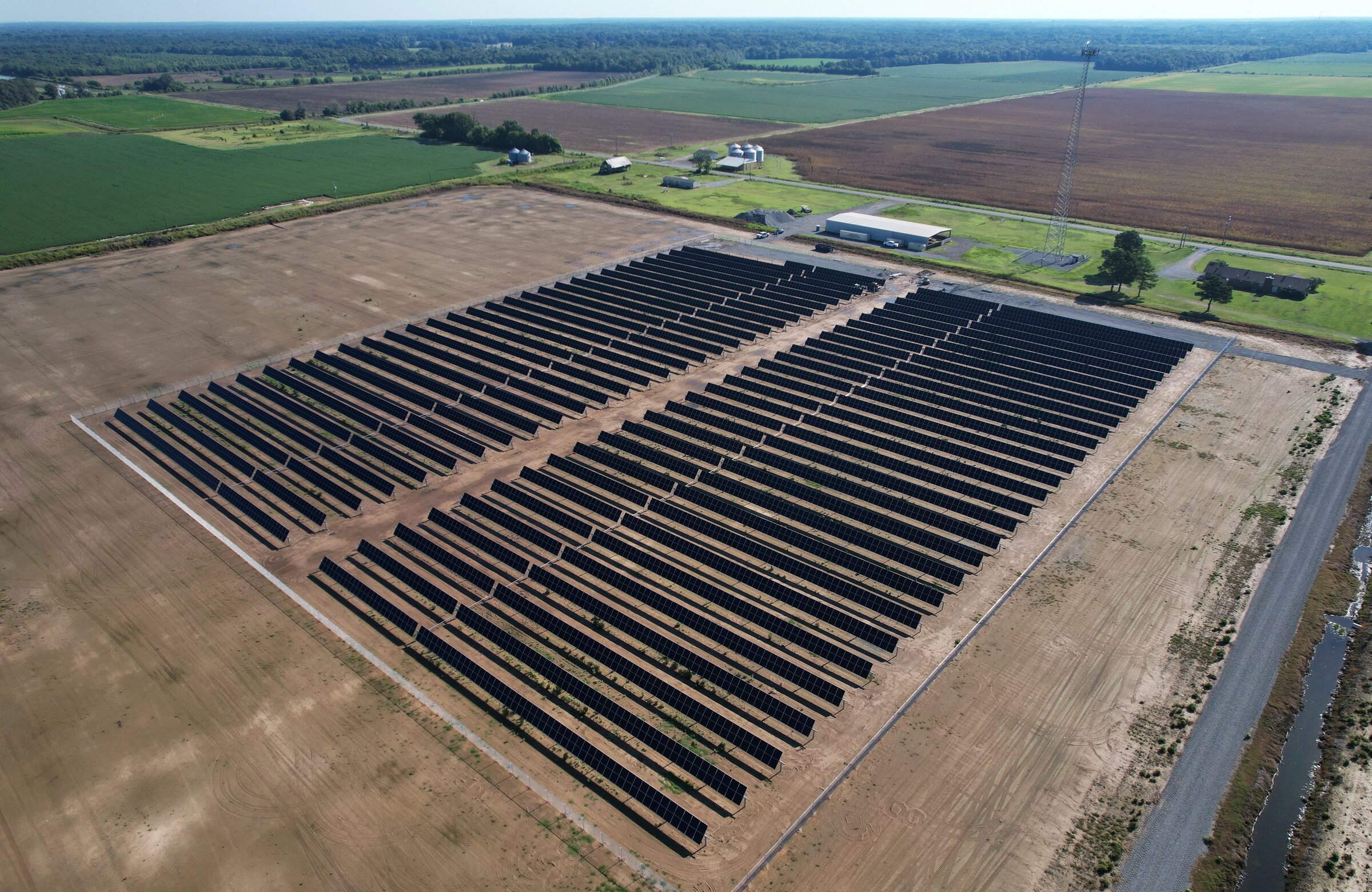 The Bearskin Farm solar array located near Kerr, seen here in this Friday, August 19, 2022 aerial photo, is set to go online as early as October to provide power for the company's agriculture operations. (Arkansas Democrat-Gazette/Colin Murphey)