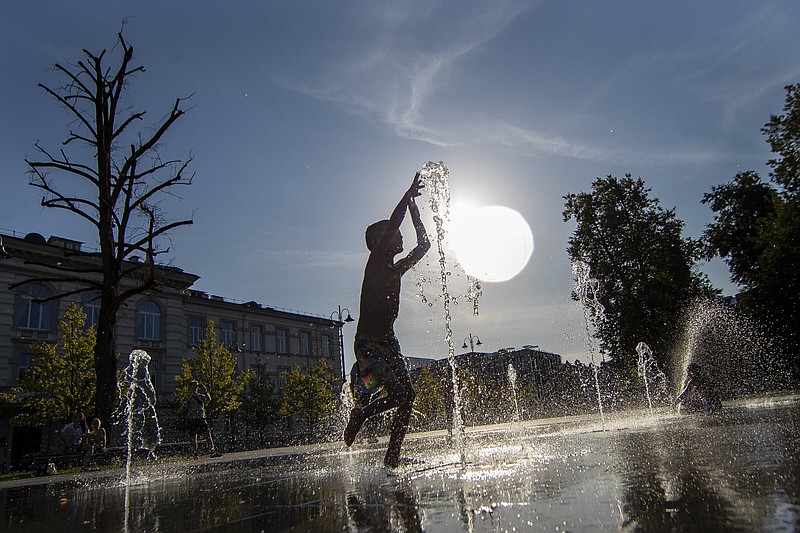 A boy cools off in a public fountain in Vilnius, Lithuania, Friday, Aug. 19, 2022. Hot weather has set in with temperatures rising up to 34 degrees Celsius (93.2 degrees Fahrenheit) in Lithuania. (AP Photo/Mindaugas Kulbis)

BRUSSELS -- Parts of the European Union could face three more months of warmer and drier conditions as Europe weathers a major drought that has fueled forest fires, dried up rivers and devastated crops, the 27-nation bloc's Earth observation program warns in a report.

"Warmer and drier than usual conditions are likely to occur in the western Euro-Mediterranean region in the coming months till November 2022," notably in Spain and Portugal, the EU's Copernicus program said in a report for the month of August.

Almost half of the 27-nation EU is under drought warning, with conditions worsening in Belgium, France, Germany, Hungary, Ireland, Italy, Luxembourg, the Netherlands, Portugal, Romania and Spain. The report also noted rising drought hazards outside the EU, in Britain, Serbia, Ukraine and Moldova.

Copernicus said that a shortage of rain and a sequence of heatwaves since May have led to the dry conditions and lower river levels. That in turn has hit the energy sector, depriving hydroelectric and other power plants of their prime source of energy and cooling liquid.

Water shortages and heat stress are also reducing European crop yields, with maize, soybeans, and sunflowers hardest hit. Recent rainfall in August has helped some regions, but crops in other areas have been battered by thunderstorms.

The report comes amid what experts say could be the continent's worst drought in 500 years. Little significant rainfall has been recorded for almost two months, but Europe isn't alone. Drought conditions are also reported in East Africa, the western United States and northern Mexico.

Climate is exacerbating conditions as hotter temperatures speed up evaporation, thirsty plants take in more moisture and reduced snowfall in the winter limits supplies of fresh water available for irrigation in the summer.

In Italy, authorities managing the northern Po river have put the country's longest waterway on the highest level of drought severity alert. The parched conditions have already caused billions of euros in losses to farmers who rely on the river to irrigate fields and rice paddies.

More than 100 municipalities in France have water supply issues and drinking water is delivered by truck. More than 60 French departments are at the highest drought warning level of "crisis." Supplies in Spain's Andalusia and Extremadura regions are less than a third of normal, the report said.

Low water levels on the Rhine River have seen Germany's main industry lobby group warn that factories may have to cut production or halt it completely. The river's plunging water levels are also hitting coal and oil transport in the Netherlands.

The Danube -- Europe's second-longest river, stretching from Germany's Black Forest to the Black Sea in eastern Romania -- has dropped to one of the lowest levels recorded in the past century.