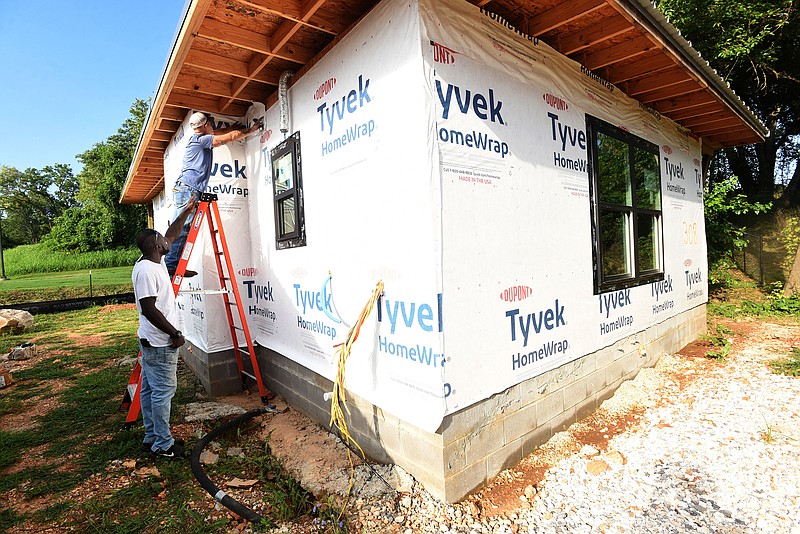 Charles Proctor (left) and Cory Nichols work Wednesday on a home at The Eighty-One in downtown Rogers. (NWA Democrat-Gazette/Flip Putthoff)

The residential real estate market shows no signs of cooling in Northwest Arkansas, where prices in the second quarter rose faster than anywhere else in the country, according to industry figures.

But the market is changing.

One of Cicioni's commercial projects highlighted an attitude change about housing. Her company started "The 81" project in downtown Rogers to make up for the lack of a hotel there, she said. The development, named after the founding of Rogers in 1881, is putting seven housing units on 0.62 acres -- the size of two small house lots. The units were intended for day-by-day rental, like a hotel, but with much larger rooms that aren't connected. Two of the units are fully accessible to the handicapped. The dwellings range in size from less than 600 square feet to one of over 1,000.

Would-be buyers seeking permanent residences contacted her as the cabin-like units went up, Cicioni said. Demand was so great, she will launch another project like it with units to sell, she said. The original project is sticking with the nightly rental plan, she said.

The units' would-be buyers weren't frustrated after failing to find a conventional house, Cicioni said. The small, closely grouped buildings with little lawn to tend near a downtown were what they are looking for, she said. And that preference fits in with what she, other builders, local economists and housing experts say.

"It's not just the latest trend. Its a changing of the mindset," Cicioni said.

The quest for smaller, more densely set homes isn't being driven by the desire to be cheaper either, she said. A small space in a highly sought-after location can be just as expensive or even more costly than a big lot with a big home farther from downtown.

"The first question I'm asked when someone wants to bring a business here -- whether its a restaurant, retail or manufacturing, anything, is, 'Where are my workers going to live?'" Cicioni said. "A lot of these businesses are bringing their people with them, and the first conversation they want to have is how their people are going to get to and from work." Those workers want to live close enough to bike or walk to work, she said.

Duke McLarty made the same point about home preferences changing in an earlier interview. McLarty is executive director of the workforce housing center of the Northwest Arkansas Council. The council is a nonprofit group of community and business leaders that focus on regional issues. Encouraging development of places where people can afford to live is the council's top priority.

Smaller, high-density housing near workplaces is not just a way of easing the housing shortage, McLarty said. It's what much of the market for housing demands.

NO BUBBLE TO BURST

Housing prices rose at a faster percentage rate in Northwest Arkansas than anywhere else in the United States during the second quarter of this year, according to the National Association of Realtors quarterly report.

The median price for single-family homes in Northwest Arkansas hit $350,000 rom April through June, up 31.9% from where that price was at the end of the second quarter of 2021, the report said.

A lack of supply drives home price increases, said both McLarty and Mervin Jebaraj, director of the business and economic research center at the University of Arkansas, Fayetteville. Northwest Arkansas' situation now bears no meaningful resemblance to the "housing bubble" of the early 2000s, they said, the last time housing prices climbed steeply.

The market eventually crashed in 2008, but there is no prospect of that here, they said.

"The lending environment is completely different from what it was" in the years before 2008, McLarty said. The housing boom collapsed nationwide in 2008 because of foreclosures on bad loans to marginal borrowers.

"You have to be a much stronger buyer to get a loan now," he said. "Back then, it was the Wild West."

The Federal Reserve's recent increase in interest rates has yet to dampen demand, McLarty said.

"I think it's still a little too early to tell if those increases will affect rising prices, but they did immediately price out people who were at the lower end of qualifying for a home loan," McLarty said.

Rising prices pushed out many of those at the lower, more affordable end of the housing market before the rate increase, he said.

"Our housing stock at that level was limited to begin with."

Jebaraj agreed no signs of any sudden decrease in home prices are visible.

"When you have a bubble, homes are going unsold and apartments are not being rented," he said. "That is not happening here.

"The vacancy rate is functionally zero" for both single- and multifamily homes, Jebaraj said. "Some apartment complexes have waiting lists."

McLarty said there's no cure-all solution. A variety of approaches is needed.

Northwest Arkansas doesn't have a single authority to make changes in local regulations, with two counties, four major cities and a number of smaller cities. This variety presents no problems so far though, McLarty said.

"At the executive and council level of local government, at least there is an acknowledgement" rising housing prices are a problem, he said. "There's virtually no resistance to taking it on. Bentonville's set up a task force on it. Springdale's changed its downtown master plan. The other cities are doing their part."

One problem should get more attention, Cicioni said: infrastructure, particularly wastewater access. Much of the land in the region needs access to sewer service if it is ever going to be developed, she said.

The answer to higher housing costs in downtown areas has traditionally been to build cheaper housing farther out of town centers, Jebaraj said. That option was becoming uneconomical even before recent spikes in gasoline prices, he said. Now the prices for "cheaper" housing in areas farther afield are rising too, he said.

Fifty-one percent of Springdale residents, for instance, spend more than 45% of their household income on housing and transportation, according to the affordability index. Of those, 19.8% spend 54% or more.

Average transportation costs as a portion of household income still exceeds rapidly rising housing costs in all four of the regions largest cities, according to the center's figures. Those figures for transportation costs are: 25% in Bentonville, 27% in Rogers, 25% in Springdale and 24% in Fayetteville.

Combined, housing and transportation costs as a percentage of income in Northwest Arkansas passed Chicago and New York City no later than early last year, center figures show. Housing-plus-transportation costs compared with income now average 46% in Fayetteville, 47% in Springdale, 53% in Rogers and 52% in Bentonville, according to the index.

The tight housing situation soon will affect decisions on whether to open a new business here, Jebaraj predicted.

"I think we're already close to that point," he said, particularly in the leisure and hospitality sectors. "Restaurants are constantly looking for workers," he said. 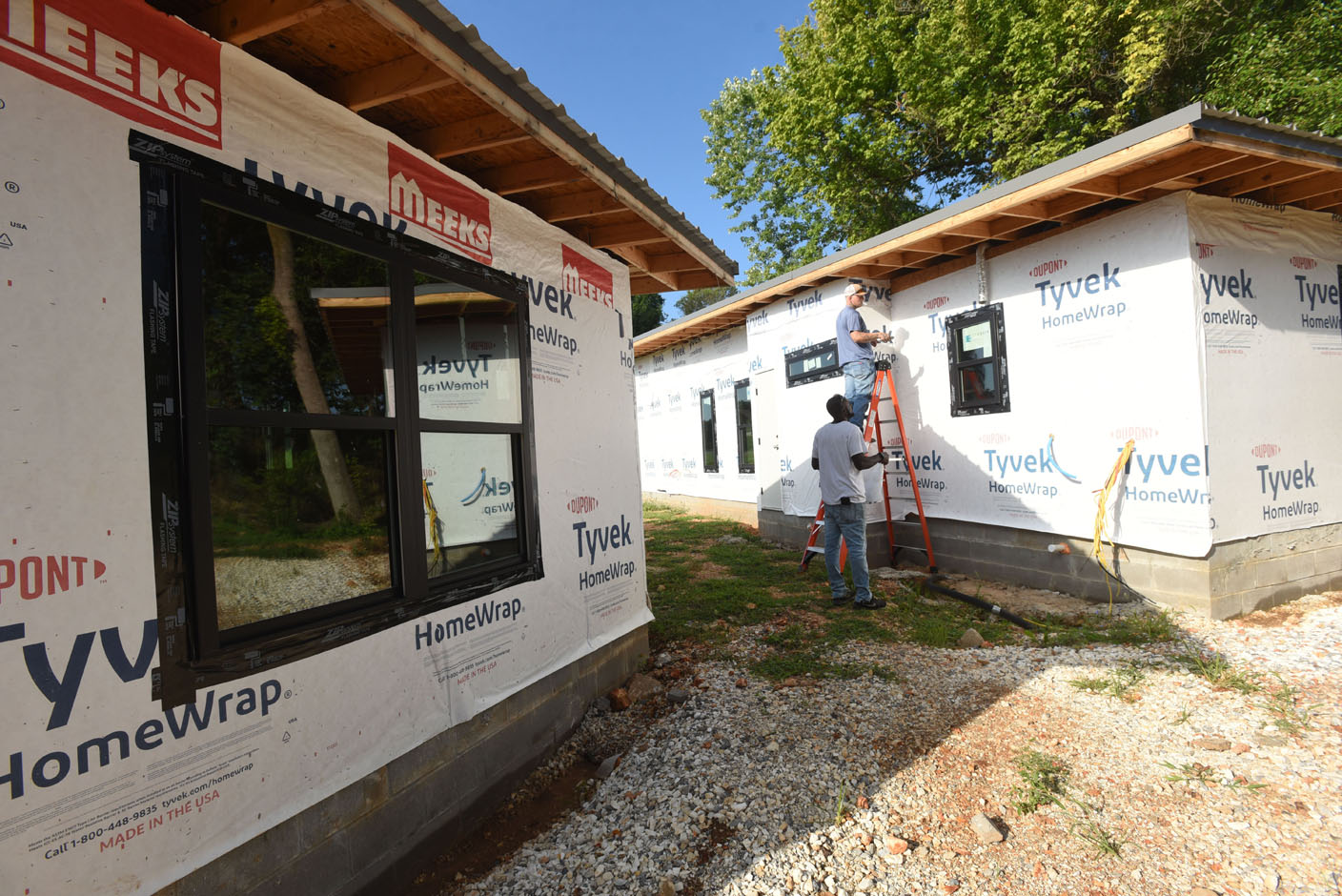 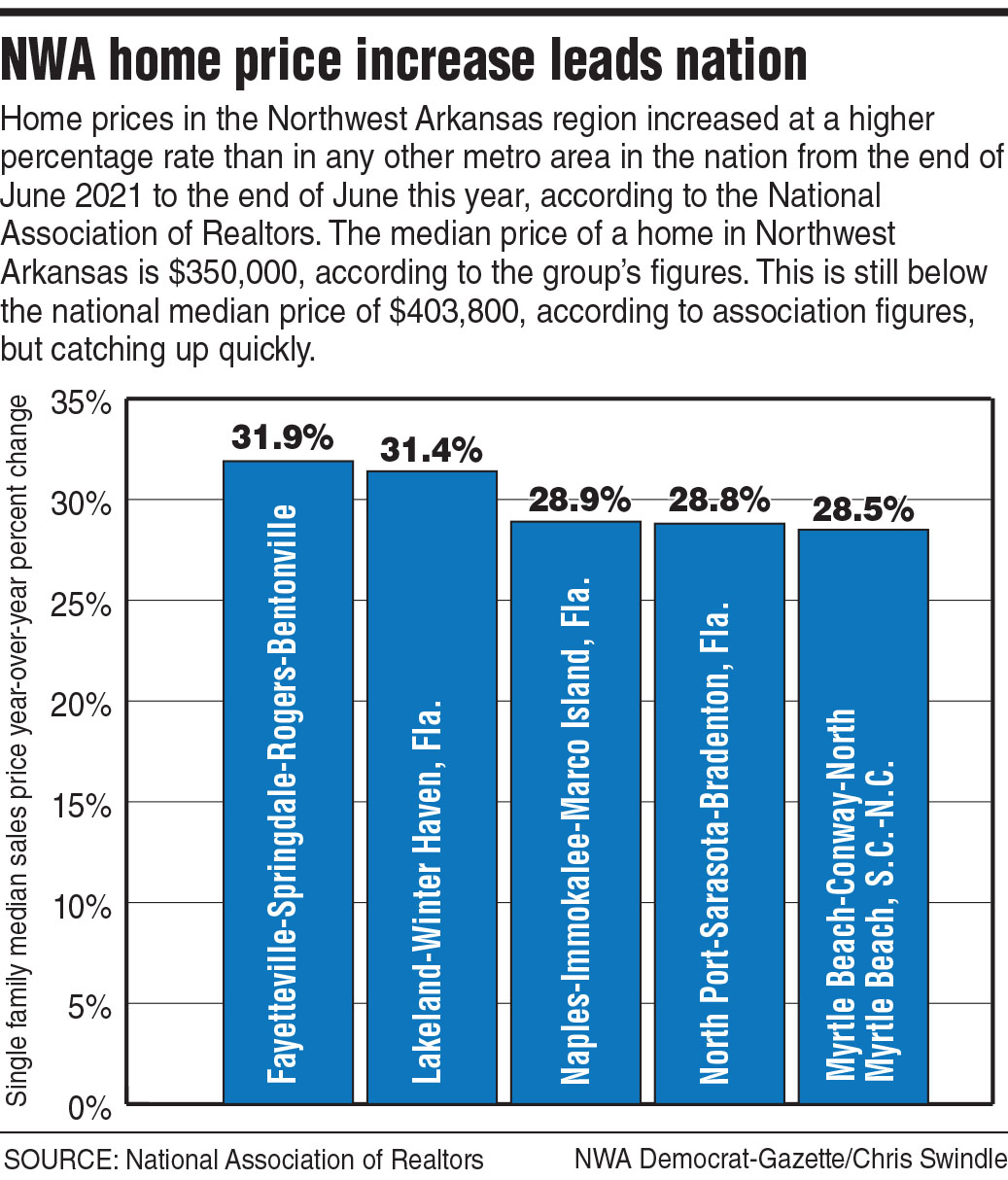