Survey: Northwest Arkansas bus stops could use a sprucing up 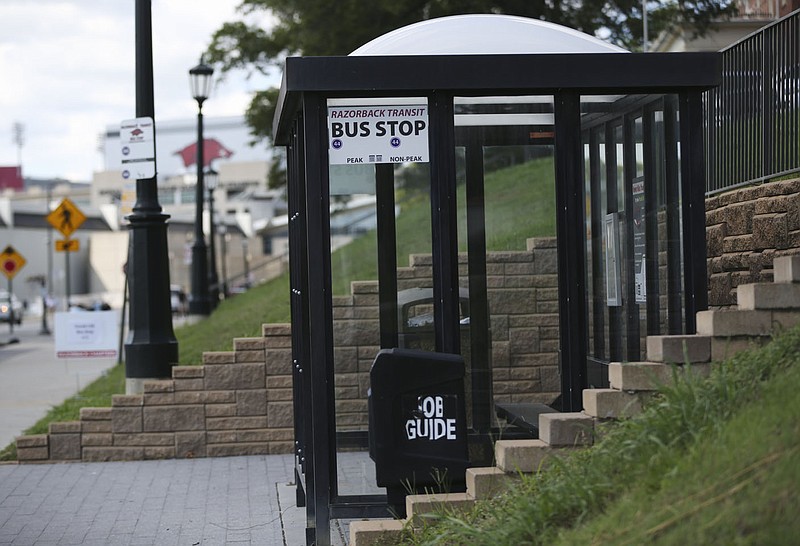 Ozark Regional Transit bus stops stink, and it's going to take several years and a lot of money to fix the issues, according to a draft study by Olsson Engineering.

There are limited passenger amenities, problems with accessibility for disabled people and other riders and few shelters for those waiting on the buses, according to the study commissioned by Regional Transit with a grant from the Walton Family Foundation.

Most stops are no more than a patch of bare ground and a sign.

Gardner said having the study in hand allows Regional Transit to approach the cities with quality information and ask for their support. The next step is to talk with the cities and see what they can do, budget-wise, to implement some of the recommendations beginning next year.

He'd like to see at least five stops in each city improved.

"Right now, it's just a study," Gardner said. "Now it's a matter of having the board and the cities comment on their commitment to seeing this succeed."

Chris Brown, who represents Fayetteville, urged the board and cities to look for grant money to do some of the work.

"I can tell you, from Fayetteville's perspective, doing five of these locations is pretty much a no-brainer," Brown said. "We'd like to do more than that so whatever help we can get, we'll just be able to extend what we can do."

The study will be posted online for the public to view when it's complete, Gardner said. It's about 90% right now.

Where we are now

The primary takeaway from the study is the vast majority of stops don't have even the basic components for Americans with Disabilities Act compliance. While a majority of stops do have a sidewalk nearby, 14% also have a concrete landing pad connected to the sidewalk.

For disabilities act compliance, a firm, stable surface, typically a concrete pad at least 8 x 5 feet and aligned with the front door of the bus, is required.

The landing pads are what allow riders using a wheelchair to be able to board a bus using a ramp or lift extending from the bus. For those able to walk to and from the stop, a concrete landing pad provides an unobstructed space free of tripping or other hazards and free of mud or other unstable surfaces.

The landing pads, in addition to bus stop signs, add visibility to the stops and makes clear the location where the front door of the bus will be. That helps passengers know where to wait for the bus and helps make passengers more visible to the bus driver.

Upgrading stops to a basic level of accessibility should be a primary goal, according to the study.

Fewer than 8% of stops surveyed have passenger amenities installed, other than a sign. Less than 6% have a shelter, according to the study. Passengers have no place to sit to wait for the bus and no shade or shelter from inclement weather.

A lack of amenities also discourages ridership, especially among riders who have other transportation options available, according to the study. Amenities such as benches and shelters display a welcoming and comfortable environment to potential passengers. Residents are more likely to use transit when these amenities are present, and the community is more likely to view transit favorably and as a quality public service, according to the study.

Lighting is an important component as well. Most bus stops noted as having lighting are generally lit by street lights, according to the study. While that lighting is important and provides an element of safety, the lighting itself isn't an element of the stop and is usually not situated at an optimal location for riders. Lighting specifically designed for a stop has a far greater benefit to visibility and safety.

A vision for enhancements

The study process included talking with stakeholders, transit operators and riders to develop a vision for transit infrastructure and amenities.

Safety should be the top priority when planning, designing, and implementing improvements, according to the study. Transit users should be able to safely navigate to stops, wait for the bus in a nonhazardous environment and board and leave the bus safely.

Safety of the bus drivers, as well as other drivers and street users, should be a primary consideration as well.

Improvements should be prioritized at locations that will have the highest impact, such as places with the highest ridership and those near major activity centers.

Enhancing bus stops should be done as part of public infrastructure and private development projects adjacent to bus stops. Street, sidewalk, or trail projects, for example, could incorporate bus stop improvements in planning, design and construction, according to the study.

The Bus Stop Enhancements Plan is intended to work with recommendations in the Connect Northwest Arkansas Plan, a 10-year regional transportation improvement plan, according to the study.

Level 2 stops add a shelter and bench as well as connections to sidewalks.

Level 3 stops add lighting for safety, trash cans, landscaping or planters and art or something to provide a sense of place.

The study adds a fourth.

Level 4 stops are mobility hubs with all available amenities, according to the study. They're located at in areas with high ridership and bus transfers take place there. Examples are Hillcrest Towers and the Northwest Arkansas Mall in Fayetteville, Walmart on Pleasant Street in Springdale, Pinnacle Hills Boulevard and Champions Drive in Rogers and Burns Hall on the Northwest Arkansas Community College campus in Bentonville.

Engineers with Olsson estimated cost for each type of improvement. Those cost estimates are broken into phases for each of the four cities that offer public transit, as well as steps Regional Transit can take to implement items in the plan.

Implementation costs are presented for each city for the improvement of existing stops. Then, costs are estimated for adding future improvements envisioned in Connect Northwest Arkansas. The future phases are one to two years; two to five years; and five to 10 years.

Cost estimates are derived from numerous sources including actual Regional Transit costs, estimates for amenities from vendors and known costs for other, similar projects.

Fayetteville, the region's largest city, also has the highest ridership numbers and is home to the University of Arkansas. Because of that, Fayetteville has the most recommended level 2-4 stops, compared to the other cities, and also the highest estimated costs for making the improvements.

But, transit demand and ridership is expected to grow throughout the region and all four cities are recommended for a vast expansion in transit infrastructure compared to existing conditions, according to the study.