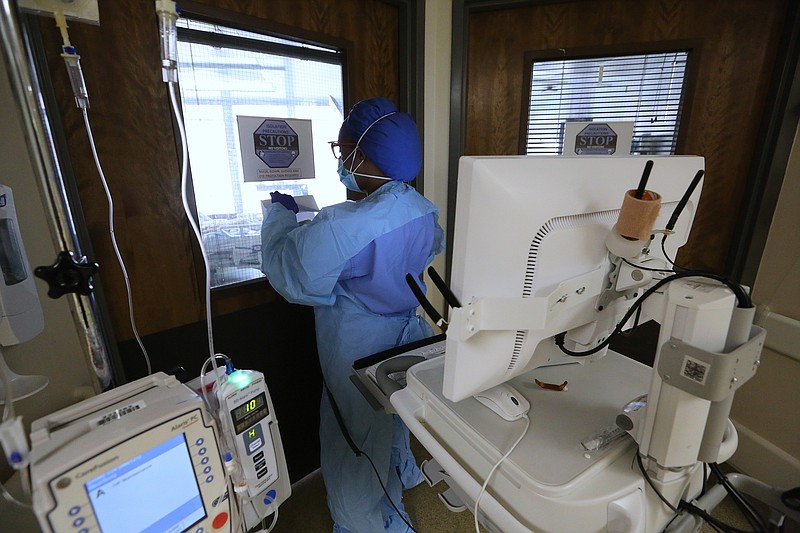 Nurse Takela Gardner looks over a note before entering a room in one of the Covid wards at University of Arkansas for Medical Science on Thursday, July 22, 2021, in Little Rock. .(Arkansas Democrat-Gazette/Thomas Metthe)

An uptick in Arkansas' new coronavirus case numbers continued on Monday as the reported number of people hospitalized in the state with covid-19 rose back up after falling over the weekend.Meanwhile, for the second day in a row, the state didn't report any new deaths from covid-19.The death toll, as tracked by the Department of Health, remained at 11,905.Arkansas' count of cases rose Monday by 468, an increase that was up by 16 compared to the one a day earlier and by 15 compared to the one the previous Monday.Already at its highest level since the week ending Aug. 8, the average daily increase in the state's case count over a rolling seven-day period grew to 938.With recoveries outnumbering new cases, the number of cases in the state that were considered active fell by 634, to 10,838, its second straight daily decline.The number as of Monday was still larger by 176 than it was a week earlier, however.After falling the previous two days, the number of people reported to be hospitalized in the state with covid-19 rose by 10, to 324.The number in intensive care, which didn't change Sunday, fell Monday by three, to 56.The number on ventilators rose by two, to 15, after not changing the previous three days.