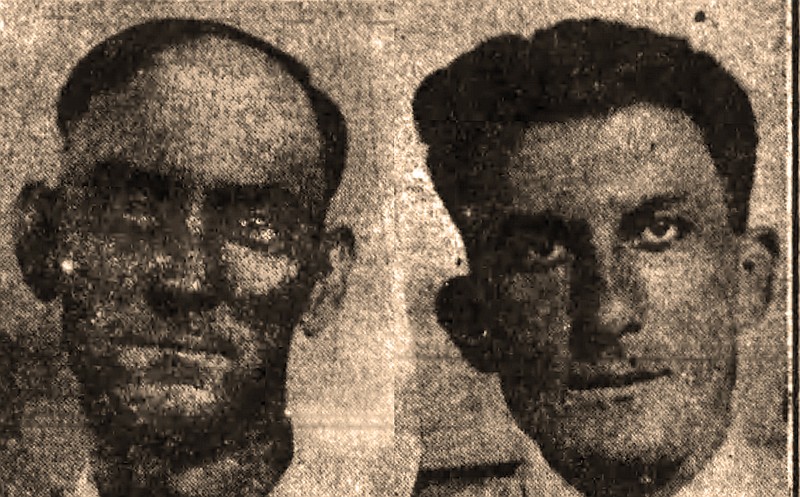 Homer Poe (left) and his half-brother James Poe met for the first time in a Little Rock hospital in August 1922. From the Aug. 30, 1922, Arkansas Gazette. (Democrat-Gazette archives)

If ever I am assigned to cover the rare flowering of a fine elderly citizen's Queen of the Night, somebody please stand beside me during the watch party and every so often lean in to whisper, "Be careful."

An unknown correspondent of the Arkansas Gazette, possibly social scribe Miss Nell Cotnam, was tasked with such an assignment 100 years ago. Eighty-eight-year-old Mrs. Margaret Rose, widow of the once-famous Judge U.M. Rose, opened her home at 620 W. Third St. so everyone could witness the marvel of her houseplant in bloom.

Given that there were at least three society dames in town with similar plants, Possibly-Nell acquitted herself OK.

"There has always been a certain mystery attached to the flowering of a night-blooming cereus," she (or someone else) reported in the Sept. 2, 1922, paper. "Whether because this strange, beautiful blossom opens only after the sun has set; or because its brief beauty vanishes with the dawn, or because the exotic, fairylike bloom contrasts so sharply with [the] gnarled, bare plant of which it springs, it is impossible to say.

"But it is true that when a night-blooming cereus shows signs of flowering, everyone within the radius of the owner's acquaintance makes a special trip to see it and the threshold is thronged with visitors."

One flower would have been sufficient to imbue the Rose home with an aroma of mystery, but Mrs. Rose's 25-year-old cactus had put on 13, and their scent was "almost overpoweringly sweet."

This thing had a circumference of 15 feet. I assume that includes all the leaves, each of which was one foot long. The leaves were narrow, spongy, green strips with regular, opposite indentations, or nicks, from which each flower had started as a tiny green bud.

"In shape, in size, in fragrance and in color, the bloom most resembles a water lily," Possibly-Nell continued. "Around the fringed, lemon-colored pistils and stamen, the waxen leaves open out into a white cup, narrowing beneath into pale green and delicate rose colored leaves."

Alas, Mrs. Rose's moment would be eclipsed two years later, when five (5) night-blooming cereus plants owned by Mrs. Arthur M. Fewell, 1312 Broadway, opened 70 (seventy) flowers at once. But we needn't dwell on that.

Fruits, should they survive, would be edible. It also might interest Friend Reader to know that Epiphyllum oxypetalum attracts bats.

[Video not showing up above? Click here to watch » arkansasonline.com/829bloom/]

BROTHER, WHO ART THOU?

Homer Poe of Enola and James Poe of Little Rock, half-brothers ages 35 and 27, had neither met nor heard of each other until 7 p.m. Aug. 29, 1922, when a hospital nurse in Little Rock noticed they shared a last name.

Not quite four decades before, the men's father, John Poe of Grant County, married Homer's mother, a Faulkner County girl, and they had four children. All but one — named Henry — died. The couple split up. She left Henry with John and returned to her family.

Back in Grant County, John Poe remarried. He and the former Betty Criglow had three children, including James. James and (Homer's full brother) Henry, grew up together.

Homer Poe and his wife had been staying at the Research Hospital (for three weeks!) while he recovered from an operation. Mr. and Mrs. James Poe arrived and were placed in a room next to the Homer Poes. Mrs. James was very ill.

Nurse Christine Dearie noted their names. She stopped Mrs. Homer Poe in the hall to jokingly inquire whether any more Poes were coming.

Mrs. Homer's immediate reaction was that she didn't know. But it wasn't long before she looked into the other room to meet the James Poes. The brief exchange piled coincidences high enough for James to wonder whether Homer had a brother named Henry. When she said yes, James hurried next door.

"Why, he looks just like his brother Henry," James exclaimed.

James said his father (who died in 1916) and brother Henry had never mentioned Homer. Quite likely they didn't even know he existed.

NOT A REAL MAGGIE

At Danville, a postal clerk found herself trying to explain to an elderly woodworker that the cartoon strip "Bringing Up Father" in the Arkansas Democrat was not about real people.

Drawn by George McManus, this strip followed the marital battles of newly wealthy Irish immigrants: The wife, Maggie, often lost patience with her floozy-chasing, former hod-carrying husband, Jiggs, and beaned him with the rolling pin.

Roane sympathized with Maggie. He'd made her some new rolling pins.

The Aug. 27 Democrat carried news that a human calculator resided in Fayetteville. And he was a well-known businessman.

Marshall Douglas (1881-1936), president of the Washington County Hardware Co., at about age 10 rejected standard instructions for arithmetic and instead developed his own mental method — which sounds a lot like the approach lucky kids learn in school today.

He could add or multiply with lightning speed.

"It's very simple," Douglas told a reporter. "It is practice and attention. Totals do not come to me subconsciously. I add the figures as I hear them, and I see them mentally.

Look this man up in old newspapers from Arkansas and Oklahoma and you'll learn that he and partners took their business public in the two states, selling stock as the Benton County Hardware Co. He later became a bank president and a tax commissioner in Oklahoma. He died in Muskogee at 54, run over by a car while crossing the street.

A few years before 1922 in Pangburn, one Jake Pierce had married a widow with several children. The Aug. 30, 1922, Democrat reported that, recently, Pierce's father, a widower, married one of the daughters of Jake's wife.

Stories like these make newspapers great fun. Speaking of human interest, a Gazette house ad published that same week 100 years ago reported that there were 286 newspapers and periodicals in Arkansas in 1921. Thirty-nine (39) were daily newspapers.