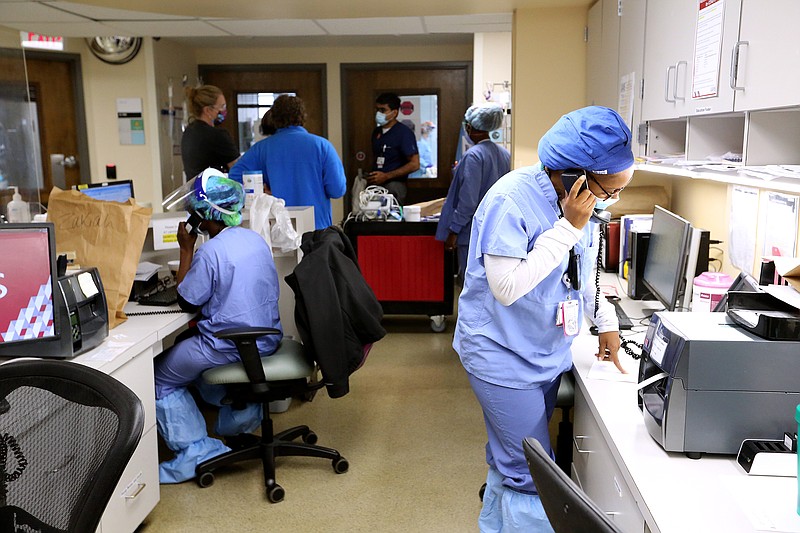 An uptick in Arkansas' new coronavirus case numbers -- linked by health officials to the start of the 2022-23 school year -- continued on Monday as the reported number of people hospitalized in the state with covid-19 rose back up after falling over the weekend.

The death toll, as tracked by the state Department of Health, remained at 11,905.

The state's count of cases rose Monday by 468, an increase that was up by 16 compared to the one a day earlier and by 15 from the previous Monday.

Infections among children, who make up about 23% of the state's population, accounted for about 33% of the new cases on Monday.

Health Department Director Jennifer Dillaha said new cases recently have been rising among children and 18 year-olds but falling among other age groups.

The result has been a slight upward trend in the state's new case numbers.

Dillaha noted that the state's active case total, while down from Sunday, was higher Monday than it was a week earlier.

"I anticipate that it will turn the corner in the near future, similar to the way that we did last year when we started school and [the] delta [variant] was spreading."

After falling by a total of 11 on Saturday and Sunday, the number of people reported to be hospitalized in the state with covid-19 rose Monday by 10, to 324.

The number as of Monday was up by four compared to a week earlier although still down from the peak of 442 that it reached on July 20.

"I would say the overall trend is down, even if there's a day up or so," Dillaha said of the state's hospitalization numbers.

Already at its highest level since the week ending Aug. 8, the average daily increase in the state's case count over a rolling seven-day period grew on Monday to 938.

With recoveries outnumbering new cases, the number of cases in the state that were considered active fell by 634, to 10,838, its second straight daily decline.

The number as of Monday was still larger by 176 than it was a week earlier, however.

Compared to their populations, Arkansans 18 and younger and those 65 and older both accounted for outsized shares of the active cases.

For all age groups combined, the overall active case total translated to a rate of 358 active cases per 100,000 residents.

Because their elevated risk of severe illness from covid-19 makes them eligible for the Pfizer antiviral pill Paxlovid, Dillaha said older Arkansans may be more likely to be tested by a health care provider, rather than relying on home test kits, when they get infected.

Although they're more likely to be vaccinated, older people also tend to have weaker immune systems, making it especially important for them to stay up to date on their booster shots, Dillaha said.

"Not enough in that age range that we're comfortable with, proportionately, have gotten their booster, so immunity may have waned, and they're finding they're getting infected," Dillaha said.

"We really need people in that age group to consider strongly the option of getting a booster dose or a second booster dose."

Pulaski County had the most new cases, 66, on Monday, followed by Washington County with 35 and Faulkner County with 29.

The number of the state's covid-19 patients who were in intensive care, which didn't change Sunday, fell Monday by three, to 56.

The number on ventilators rose by two, to 15, after not changing the previous three days.

At its hospitals in Little Rock and Springdale, Arkansas Children's had 13 covid-19 patients on Monday, down from 14 as of Thursday, spokeswoman Hilary DeMillo said.